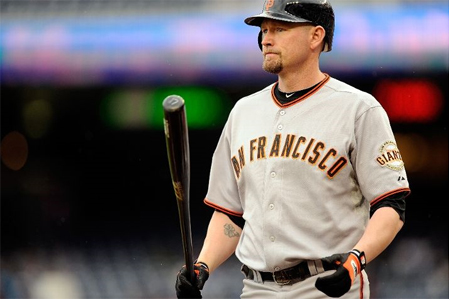 How would you like to hear about the time I legitimately thought my buddy was going to come to blows with a member of the San Francisco Giants at a hockey game? Is that something you’d be interested in hearing about?

Yeah, needless to say my Game 2 experience was probably a little bit different than any other blogger’s.

Let me preface what I’m about to say by openly admitting I have a unique relationship with the Tampa Bay sports scene.

This dates back to Jan. 7, 2006, when I decided to take my wife to the Washington Redskins’ first playoff game of Joe Gibbs 2.0 – a matchup with the Tampa Bay Buccaneers.

On that day, I opted to rock my Sean Taylor jersey for the special occasion (which becomes noteworthy in a moment).

The Redskins got off to a fast start that day thanks to an interception by linebacker-turned-radio host LaVar Arrington that set up a six-yard touchdown by running back Clinton Portis and a 51-yard fumble return for a touchdown by Taylor.

The Redskins, back in the postseason for the first time since 1999, were up 14-0 before the first quarter even ended and life couldn’t have been better.

At this point, I decided to have a little fun with the locals by turning around and playfully asking “Do you mind if we fire off your cannons, since you’re not using them?”

Now, if you’re not familiar with Raymond James Stadium, it’s the only venue around that has a pirate ship built into the stadium. And yes, that pirate ship has cannons that the Bucs fire off whenever they put points on the board.

So you can imagine how thrilled the locals were with my smart-ass comment. And when Taylor was ejected a little bit later in the game for spitting in the face of Buccaneers running back Michael Pittman … well … it’s safe to say the Bucs fans let me hear about it.

By the time the game ended and the Redskins had emerged victorious 17-10, the crowd had gotten hostile – with more than a few Bucs fans basically looking for me to give them a reason to start something.

For once, I was smart enough to keep my mouth shut as we got the hell out of there and enjoyed the victory with fellow ‘Skins fans, but there were definitely a few moments there when I thought I may end up taking a sucker punch from a pissed off Tampa fan for drawing attention to myself earlier in the evening.

Fast forward to Sunday night, when the Washington Capitals hosted the Tampa Bay Lightning at the Verizon Center in Game 2 of their second-round series.

This time around, I was a model citizen as I watched the game with my wife and a few friends in a luxury suite. The same could not be said for San Francisco Giants first baseman Aubrey Huff.

After losing 5-2 to the Nationals earlier in the day, Huff and 15 or so of his teammates took in the Caps-Bolts game in the suite next to the one we were occupying.

Well, midway through the first period one of my buddies – who we’ll refer to as “Juneau” for this story since that’s one of his favorite players of all time – was unhappy with the lackadaisical attitude and sloppy play a few Caps players were displaying in their defensive zone.

And in the heat of the moment, he shared his thoughts by yelling a few choice words at guys like Mike Green and Jeff Schultz.

This caught the attention of Giants outfielder Pat Burrell, who made his way over to the edge of their suite and said to Juneau, “They can’t hear you.”

Much like my comment back in ’06, Burrell was a playful jab directed at the locals. Once he said the line, he looked over to me and gave a smile, a wink and a nod.

And if you think about it, why wouldn’t he say something? He’s a professional athlete who for 11 seasons now has been heckled in every visiting city he’s ever played in, so it’s not overly surprising to hear him playfully stand up for fellow athletes when given this rare opportunity.

My buddy took it in stride and I honestly thought that was the end of it … until another Caps fan decided to fire back, saying something disparaging about baseball. The comment was something along the lines of “I hope the Capitals get it together. Otherwise we might be forced to watch baseball” and calls the Giants players losers.

That’s when Huff inserted himself into the story. He stands up and says “Wait. Let me shine this championship ring for you” and proceeds to do just that. Unfortunately the line got a few laughs from people nearby and Huff’s liquid courage was in full effect.

Huff, who was chain smoking and pounding shitty beers (Bud Light, if I recall correctly) even moved to the seat closest to us to ensure the awkward situation continued.

At the intermission, I poked my head over to their side and said something along the lines of “Hey guys, it’s all in good fun” in hopes of diffusing the situation, to which Huff responded, “Don’t worry about it, man. I’m sure those guys are embarrassing to you too. There’s one in every crowd.”

And honestly, I once again thought that was the end of it.

But the more beers Huff got in him, the more fired up he got. And his teammates, seeing the potential for a memorable evening, were more than happy to keep egging him on.

So Huff, who has just three hits in his last 34 at bats, apparently had plenty of energy left in the tank and was more than happy to stand up and obnoxiously cheer for Tampa – the city which he called home for six and a half seasons.

When Martin St. Louis’ pass deflected off of Green and into the Caps net to give the away team a 2-1 lead, Huff reacted as if he’d scored the goal himself.
He was dancing. He was screaming about Tampa sending Washington to an early playoff exit. In short, he was having the time of his life and making sure anyone within earshot knew it.

Even after my buddy Juneau moved away from him – joining me in the back row of seats in our suite – Huff continued to turn around and try to antagonize the guy.

When he finally realized that Juneau wasn’t interested in his douchebaggery, Huff found another shiny object to occupy his time – getting into a verbal altercation with a Caps fan located near the other side of their suite.

When Vincent Lecavalier scored the overtime winner for Tampa, Huff lost it. He wanted anyone and everyone nearby to know how much he was enjoying the moment.

And in that moment, he didn’t look like a $10-million-a-year world champion. He looked like an obnoxious drunk begging someone – anyone – to fight him. I’m glad to report that no Caps fans stooped to his level.

Thankfully, Juneau was willing to be the bigger man – even if it meant swallowing his pride in the face of a belligerent fan looking for a conflict.

I will say though, this story shouldn’t be held against the Giants. With the exception of one player who had too much to drink, the rest of the guys were having a good time and were happily interacting with D.C. sports fans without incident.

I saw several guys – Burrell included – posing for photos and signing autographs for kids during the intermission. Pitcher Brian Wilson (and his epic beard) was cracking people up all night long. And I even chatted briefly with second baseman Emmanuel Burriss – a D.C. native who is a big-time Caps fan – and he couldn’t have been nicer.

My hope is, the next time Huff heads to the plate, more than a few opposing fans let him have it. Whether it’s here in Washington or elsewhere, here’s hoping they treat him the same way he carried himself at the Caps game.

The Giants don’t have a trip to Philadelphia (where drunks are always more than happy to act a fool) on the schedule for a while, but maybe a few passionate fans will be willing and able to step up and answer the call.

Oh, and while you’re at it, if the Caps do somehow come back and make a series out of this, feel free to let Huff hear about that too.