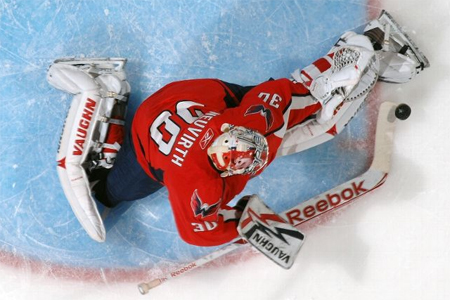 When it comes to professional sports – especially in the postseason – nothing is more important than steady goaltending.

Not a quarterback. Not a closer. Not a point guard.

Simply put, without a reliable goalie in net, there’s little reason for hope.

Just look at high seeds like the Philadelphia Flyers, who have used three different netminders in their six playoff games, and the Vancouver Canucks, who have used multiple backstops in three-straight games.

Those highly-touted teams know they’re playing with fire for as long as they continue to play “goalie roulette,” but they have little choice because none of the five combined goalies in play have done anything to distance themselves from the rest of the pack.

In related news, both the Flyers and the Canucks are now facing must-win Game 7 scenarios in the opening round of the playoffs.

All of which is why fans of the Washington Capitals should be thanking their lucky stars that for the first time in recent history, the Caps don’t have to worry about a goalie controversy in the postseason.

Whether we’re talking about a sentimental favorite like Olaf Kolzig versus deadline acquisition Christobal Huet or veteran Jose Theodore versus upstart rookie Semyon Varlamov, it seems that for as long as Bruce Boudreau has been in town, the Capitals have yet to have a sure-fire top goaltender.

During the regular season, Caps fans saw plenty of the team’s talented trio of youngsters – Varlamov, Braden Holtby and Michal Neuvirth – but it’s safe to say that the debate has officially been settled.

Neuvirth, who has already won two championships in the American Hockey League and one in the Ontario Hockey League, was tabbed Washington’s starter after being the team’s most consistent option throughout the regular season.

It was a pleasant surprise when the 23-year-old rookie went 27-12-4 with a 2.45 goals against average and a .914 save percentage during the regular season.

Against the New York Rangers though, Neuvirth was able to elevate his game to another level.

In his first playoff series, Neuvirth allowed just eight goals in five games – with a goals against average of 1.38 and a .946 save percentage. Both of which are tops in the NHL.

Neuvirth saw the puck well, did a fantastic job of limiting rebounds and never let the Rangers get under his skin – even when 6-foot-7 forward Brian Boyle continually tried to run him over or a pest like Brandon Prust continued to take swipes at the youngster during stoppages in play.

Nothing New York threw at him ever fazed Neuvirth, who played like anything but a rookie in his postseason debut.

“He didn’t give them a chance,” said Boudreau. “He was great covering up pucks and he didn’t allow rebounds. Then we get chances to change and slow it down when we wanted to do that. I’m telling you – a lot of people don’t know his name too much, at least outside our circles, but he’s a heck of a goalie.”

As Japers’ Rink pointed out over the weekend, Neuvirth stopped 33 of 34 shots he faced (.971 save percentage) during the series when Washington had the lead. The lone exception came with less than a minute to play in Game 5 when Rangers forward Wojtek Wolski ruined Neuvirth’s bid for a second shutout.

So basically, when the stakes were raised, Neuvirth continued to find a way to save the day. Honestly though, with the Capitals’ offense no longer able to score at will, this is exactly the type of performance Washington needed.

“Goaltending is such a huge factor in the playoffs,” said center Jason Arnott. “You gotta have a hot goalie and he’s gotta be playing well.

“He proved it,” Arnott continued. “He played calm and collected the whole series and played real well for us. He needs to be our backbone, and when he’s playing like that, it gives us the confidence to go out and play in front of him.”

Which is why the Capitals are now able to get some well-deserved rest up while teams like Philadelphia and Vancouver are still trying to survive to play another day.

After Game 5, I half-jokingly admitted to some buddies that I didn’t know how to enjoy the moment. After all, it had been 13 years since the Capitals had won a series in just five games. Turns out I wasn’t alone.

“We’ve never done it before,” Boudreau said. “I’ll have to give my head a shake when I wake up tomorrow and wonder where we’re supposed to be playing.”

With Neuvirth in net and the Capitals supremely focused on both sides of the rink, New York never had a chance. In fact, in three games at the Verizon Center, the Rangers scored a total of just two goals on 72 shots.

That, my friends, is what we call home-ice advantage.

“It is unbelievable feeling,” Neuvirth said. “The crowd was unbelievable. I’m probably never going to forget about this night.”

Washington must wait until later in the week to see which team they will face next – whether it’s Pittsburgh, Tampa Bay, Montreal or Buffalo. But for the first time in a long time, you get the sense that the players really don’t care which opponent is up next.

Thanks to a dedication to defense and superb goaltending from Neuvirth, the Capitals finally look like they might be ready to make things interesting in their continuing quest to bring home hockey’s most sacred hardware.

And seriously, who thought this team would ever reach that point when the wheels were coming off back in December?