thanks to chimera, caps outlast rangers 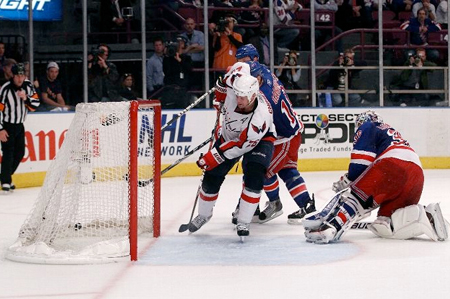 “Anytime you pass the first overtime, you’ve got a chance for history in the making” — ESPN’s Steve Levy, on April 24, 1996

Back in 1996, I had just graduated from basic training in the U.S. Army and was sent off to the Defense Information School, located at Fort George G. Meade, Md., to learn how to be a photojournalist.

It was just like being at college … well … if college had camouflage uniforms and drill sergeants.

The Washington Capitals were hosting the hated Pittsburgh Penguins in a tightly-contested playoff series just 18 miles down the road and I had a free ticket … if I could get there.

Anyone familiar with the movie Full Metal Jacket knows that drill sergeants aren’t the most sympathetic of folks, but apparently I caught a bit of a break.

This particular game was held on Wednesday, April 24, 1996, and although curfew was 9:30 p.m., I somehow talked my drill sergeant into letting me stay out a little bit later so I could attend the game.

My buddy Teddy and I took our seats up in the nosebleeds at the old U.S. Air Arena, and when the puck dropped we had no clue what we were in for.

After 60 minutes, the Caps and Pens were deadlocked at 2-2.

Twenty more minutes of action and the game was still tied.

Neither team was able to find the back of the net in the second overtime period either.

And then it finally happened.

It took more than 79 minutes of overtime, but a victor finally emerged.

No one remembers that Olie the Goalie made 62 saves that night. Or that Mario Lemieux was ejected from that game late in the second period for trying to start a fight. Or that Peter Bondra and Michal Pivonka scored for Washington.

No, history only remembers Joe Juneau failing to convert on the first-ever penalty shot awarded in overtime and Nedved made the Caps pay for it.

But I was there. And I distinctly remember watching the Caps go up on the Penguins 2-0 in that game — in a series they led two games to one — and when Lemieux was ejected, I allowed myself to think of just how sweet it would be to send our biggest rival packing. I was naive enough to get my hopes up and had no clue that, by the end of the night, I’d receive a swift kick to the beanbag.

Because we’re talking about the Capitals in the postseason, naturally, they couldn’t seal the deal.

With just over a minute left in the second, Jaromir Jagr (yes, that Jagr) scored a shorthanded goal. And even though the scoreboard still suggested Washington was in the lead, all momentum was with Pittsburgh.

Eight minutes into the third period Nedved scored to tie the game up, and we might as well have left then. But no. We sat there and prayed the Caps would find a way to overcome — even though Caps fans have never really had a reason to believe the hockey gods would ever smile down upon them.

By the time the Penguins had won the game — which was after 2 a.m. — we knew the series was over. There was simply no way a team could come back from such a heartbreaking loss.

Of course, Pittsburgh went on to win the next two games and the Capitals were once again left searching for answers.

So why am I bringing this up 15 years later? What does a game that took place when Capitals center Marcus Johansson was only five years old have to do with anything?

Look, Caps fans aren’t a confident bunch. Caps fans can never assume anything when it comes to the playoffs. As a group, we’ve been left battered and bruised too often over the years.

But watching the New York Rangers blow a 3-0 lead at home to a team that through 40 minutes absolutely looked ready to fold has me wondering just how much the Rangers has left in the tank.

Caps forward/enigma Alexander Semin struck first in the third minute of the third period to pull Washington to within two, 3-1. Less than a minute later, Johansson scored his first career playoff goal and — just like in ’96 — even though the home team was leading, momentum had obviously shifted.

With the away team suddenly skating with a second chance at life, it felt like it was only a matter of time before the game was tied. So it came as no surprise that Washington tied the game up with just under eight minutes left in regulation — even if the puck bounced off of Johansson’s backside in the process.

Once overtime began, it felt like it was only a matter of time before the comeback was complete. You didn’t know exactly when or how it was going to end, but you had a sneaking suspicion which team would be celebrating when it was all said and done.

And then it happened. And if you’re a Rangers fan, it was even more devastating than you ever could have imagined.

For reasons that remain unclear, Rangers forward Marian Gabolik — a guy who is on the books for $7.5 million this season — got in the way when his goalie, Henrik Lundqvist, attempted to gain possession of the puck.

Neither was able to make a play and Jason Chimera — the same Jason Chimera who was demoted from the top line earlier in Game 4 — was in the right place at the right time to bang home the loose puck and complete Washington’s miraculous comeback.

This time around, I wasn’t in the stands when the game finally ended. And although it only took two overtimes, there was no mistaking that all-too-familiar stunned silence that engulfed Madison Square Garden.

Just like that, the same sellout crowd that taunted coach Bruce Boudreau and his Capitals for much of the night had nothing more to say, and for the first time in recent memory, the city that never sleeps was suddenly was ready for bed.

The series technically isn’t over. The Capitals now lead the Rangers three games to one.

But I’ve been where the Rangers fans are right about now.

I’ve felt that awful feeling in the pit of my stomach — like someone walked up and sucker-punched my mother right in front of me and there was nothing I could do about it. I’ve watched as my favorite hockey team attempted to come back from such a devastating defeat, only to wilt under the pressure.

There’s no such thing as a sure thing in professional sports. Hell, last year’s Caps reminded us of that. But I’d be shocked if the Rangers win another game this series. Not after that one.

Just take a look at the body language on the Rangers bench when Chimera scored the biggest goal of his nine-year career.

Does this look like a team with anything left? I don’t think so. And neither does Boudreau.