time for caps to get more physical 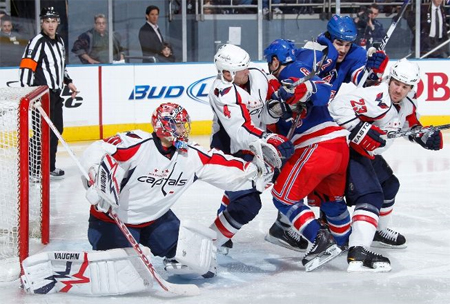 With a little extra time built in the schedule before the puck drops for Game 4 Wednesday night, I had the chance to go back and watch Game 3 over again.

The one thing that continues to stand out about Saturday’s game is the fact that the Washington Capitals really allowed the New York Rangers to dictate play.

The Rangers, playing at home for the first time this series, were the aggressor – initiating contact, finishing checks and embracing a physical brand of hockey that is rewarded in the postseason. It should therefore come as no surprise that New York won, 3-2.

If that wasn’t enough, the Rangers also tried to do anything and everything they could to get under the opposition’s skin.

Guys like Sean Avery and Brandon Prust took liberties (or, to put it more bluntly, cheapshots) at Capitals goalie Michal Neuvirth whenever they were nearby – to the point that Prust slashed Neuvirth when the two crossed paths at center ice during a stoppage in play.

Sure, the referees called a total of 12 penalties in Game 3 (eight on Washington; four on New York), but the fact is each of these instances went unnoticed. Well, not by everyone.

What bothers me most is, while the Capitals were sent to the penalty box eight times, most of the infractions were the type of lazy stick penalties usually reserved for “Bad Sasha.”

“We took way too many penalties,” said defenseman Karl Alzner. “We definitely can’t be doing that. You can understand the hard-working penalties, but we took a few that were from behind, hooking and stuff like that, and you just can’t do that.”

In the second period alone, Caps players were penalized for holding, crosschecking and hooking twice. In related news, the Rangers pitiful powerplay scored for just the second time in 38 chances over the last 12 games.

“You can’t take dumb penalties,” said forward Jason Chimera. “It’s the playoffs, and you’ve got to skate to catch up with a guy instead of using your stick.”

My point is, if the Capitals are going to take a penalty, I’d much rather it be for defending their goalie or protecting a fallen teammate (especially Green, who New York appears to be targeting because he just came back from a concussion).

Look, I’m not advocating being goaded into taking bad penalties. I’m just saying, matching the Rangers’ physical play and showing them you’re not going to back down is much preferable than seeing Nicklas Backstrom whistled for tripping.

“It’s a really double-edged sword because if we start doing something, we’re gonna get retaliation penalties, which is what you tell the guys not to do,” Boudreau said. “You’re hoping that they’re being called. If it’s not called, there’s not much you can do without getting involved in four-on-four situations and taking guys out.”

Sure, you’d prefer that the trigger-happy officials did their job and ensured guys weren’t taking a run at your goalie or clubbing your star players from behind. But if it happens more than once and nothing is done about it, then it’s on you to send a message that those kind of bush-league tactics aren’t going to fly.

Ovechkin has no problem throwing his body around to send a message. Well, the $100-million man shouldn’t be the only guy out there willing to stand up for his teammates.

Guys like Matt Hendricks, Matt Bradley and John Erskine have a very specific role on this team, and that’s to bring the pain. Make guys pay for going anywhere near your crease – let alone making contact with your goalie.

Send a message that anyone who makes contact with Neuvirth from this moment forward is going to end up on their head.

Hell, look at the photo at the top of this post. Erskine is absolutely eliminating any chance New York has of getting a rebound or “accidentally” colliding with Neuvirth.

That’s what the Capitals need more of – especially if they’re going to close out this series send the Rangers packing.

Don’t wait for someone else, in this case the referees, to do it for you. Game 3 showed what happens when you sit around hoping the officials will bail you out. You end up giving away a perfectly winnable game.

Take matters into your own hands and punish anyone who tries to engage in extracurricular activities. You can protect your goalie without going overboard. Likewise, you can be smart without being passive.

If nothing else, make these guys think twice before they take another run at one of your teammates.