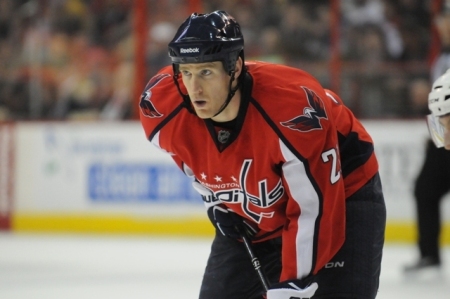 Why are some talent evaluators so biased against handsome athletes?

I mean, everyone knows that golden boy Tom Brady wasn’t drafted until the sixth round of the 2000 NFL Draft, but he’s not the only attractive athlete to have to wait to hear his name called.

The ugly truth is forward/Ladies Man Brooks Laich was equally snubbed – having to wait until the sixth round of the 2001 NHL Entry Draft when, mercifully, he was selected by the Ottawa Senators.

Laich went 193rd overall, and although he’s gone on to become a staple of Washington Capitals’ hockey, it’s safe to say Laich wasn’t even on the team’s radar at that time.

In fact, he went just two picks after the Capitals selected a left wing allegedly named Zbynek Novak, who has failed to play a single NHL game.

But Washington wasn’t the only team who missed on the Wawota, Saskatchewan native. Sadly, the Caps were one of 29 teams who didn’t even bother with Laich prior to the draft.

“I wasn’t invited,” he said. “I wasn’t considered a top pick. I didn’t go to any combine or scouting thing like that. I guess I wasn’t as high profile as some of the other guys here in the locker room.”

Just how bad was it for Laich, who always dreamed of one day playing in the NHL, in the days leading up to the draft?

“A scout from Ottawa came to my hometown and took me for a bite to eat,” he said. “He said they were sort of interested in me or whatever, but other than that I wasn’t a guy that a lot of people were talking about. I was hopeful to get drafted, but I didn’t expect a whole lot.

“I got a phone call that Sunday morning and was told I’d been drafted by the Senators,” Laich continued. “It was a pretty exciting day, but I’m sure it was a pretty different experience than a lot of other guys have.”

“Scouting has become a much bigger part of the game,” said the always-diplomatic Laich. “Especially in a salary cap era, you want to get good, young players and develop them and keep them rather than spending money on free agency because it drives your cap up. Teams focus on that a lot more now, I guess.

“Maybe if I was in the position now that I was in 10 years ago, maybe I would have had a different draft day experience,” he continued. “That year I didn’t though, but fortunately it all worked out.”

It would come as a surprise to no one if Laich came into the league with a chip on his shoulder after 29 of 30 teams didn’t even bother to scout him, but that’s not how the 27-year-old is wired.

“I just look at the big picture,” he said. “Once you step on the ice, everything evens out. People might be hyped up when they’re 17, but then they get complacent and stop developing. I’ve continued to work on my game – both on and off the ice – and knew I was going to develop into a hockey player. I wasn’t too worried about it at that time.

It’s refreshing to hear a professional athlete with more than six full seasons under his belt refer to himself as “fortunate.” That doesn’t happen very often.

Then again, that’s something that comes from his early playing days, when Laich admits that he wasn’t sure how long he’d be around.

“Your first year, you’re battling just to be here,” he said. “You’re living day-to-day. I remember making phone calls to my parents and saying ‘I have to have a good game tonight to impress them just so I can come to practice tomorrow.’

“Your second year, you’re trying to grow your role on the team,” Laich continued. “You’re a little bit more comfortable, but you’re still thinking about a lot of the same things. If you played 10 minutes a night your first year, you want to play 12 and get involved on special teams.”

It wasn’t until his third season, when Laich scored 21 goals and was a constant on the powerplay and penalty kill units that he began to feel like a “bona fide NHL player.”

Until then though, things were far less certain. While Laich’s parents always hoped their son’s dream would come true, they wanted him to have a backup plan if things didn’t work out that way.

“They used to sit me down at the table and say, ‘Okay, we know you want to be a hockey player, but …’” Laich said, letting the sentence trail off. “My dad was a principal, so he was very focused on the education side of it. If I could get an education while playing hockey, then I’d have something to fall back on.

“For me though, I never had anything else I wanted to do,” he said. “I was bound and determined to do whatever it took to get here. I love playing this game too much. Nothing was gonna stop me.”

As a 20-year-old rookie, Laich was traded, along with a second-round pick, from Ottawa to Washington for 35-year-old Peter Bondra. The move was completely unexpected and was met with mixed emotions.

“There’s two ways to look at it,” he said. “One, I was drafted a Senator and had gone through their development camps. At that point, you almost tattoo yourself as the team that drafts you because you’re so excited to be with your first NHL team.

“Then I get a phone call one day and boom, I was traded,” Laich said. “At the time, Ottawa had a Cup contending team and Washington was in rebuild mode. For me, I looked at it as my best chance to play in the NHL right away was with Washington – not with Ottawa. So in that regard, I was thankful for the opportunity. It’s turned out great and I love it here.”

And just how tough is it to “replace” a fan favorite who had represented the Capitals for more than 13 seasons when Laich would surely have rather played alongside the icon?

“We still had a few veterans, like Olaf Kolzig, Jeff Halpern and Dainius Zubrus,” Laich said. “And since then I’ve been fortunate enough to meet Peter at various events around the rink and he’s a fantastic guy. He’s a very nice guy who always has a smile on his face.

“We’ve talked a little about the trade and I’ve gotten to know him a little on a personal level,” he continued. “It would have been nice to play with him because growing up I had hockey cards and pictures of him on my wall. I actually did an industrial arts project where I wood burned a picture of Peter Bondra, so he was obviously an idol of mine. So to get traded for him one day was pretty neat.”

Since then, Laich has become a key contributor for the Capitals.

“He does a little bit of everything,” said forward Eric Fehr. “He’s kind of like our utility guy. He does penalty kill. He does the powerplay. He’s great on draws. We definitely use him in every possible situation and he’s a very valuable player for our team.”

And off the ice, Laich is one of the most respected players in that locker room.

“He’s a heart-and-soul guy,” said forward Matt Hendricks. “He’s the type of player the rest of us want to be – a hard working, gritty guy who brings it every game. Knock on wood; he doesn’t seem to ever get injured. He doesn’t ever seem to get sick. He takes good care of himself and he’s become a player that this team uses as sort of a kick stand, if you will, on a nightly basis.”

After this season, Laich is an unrestricted free agent. While his days in D.C. might be limited though, he refuses to dwell on the uncertainty.

“That’s the furthest thing from my mind,” he said. “I don’t think about that at all. I’m signed to play here this year and my entire focus all year long has been on winning the Stanley Cup – not earning a new contract. I’m confident at the end of the day when the playoffs are over; I’ll have a place to play.

“I think Washington is a fantastic place to play though and I love the fans here,” he added. “Hopefully I’ll be here for a long, long time.”

No one knows for sure if Laich will be around this time next year, but even if he does move on to a new destination, he’ll leave the Capitals in much better shape than he found them.

He wasn’t the most sought after rookie when his career began, but he’s more than made up for it along the way. Here’s hoping the Caps’ front office feels the same way.