the caps have gone country 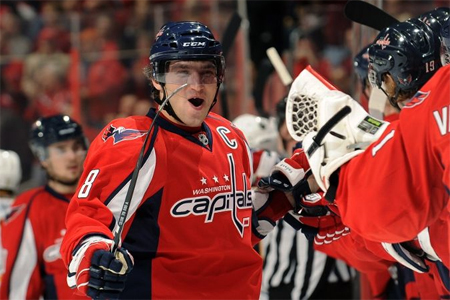 Sunday night I had the pleasure of seeing a phenomenal band called TV on the Radio perform live at the Ram’s Head in Baltimore.

They’re a great band who I’ve been a fan of for a while, but this was my first time experiencing them in person. And they didn’t disappoint.

They played for two hours and brought a crazy energy that the crowd fed off of from start to finish. By the time they played “Wolf Like Me,” the place went berserk.

At this point, I feel like it’s my civic duty to inform you that if you don’t see this band live before you die, you’re missing out.

Of course, not all people have the same musical tastes though, so what works for me might not work for you.

Washington Capitals players have been known to listen to everything from Russian techno to DJ Pauly D, but after learning what’s on the team’s playlist these days, I’m not sure TV on the Radio will be added to the rotation anytime soon.

You might have noticed that after the trade deadline, the Capitals caught fire – going 15-3-1 down the stretch and taking home the top seed in the Eastern Conference for a second-consecutive season.

Even though bodies kept dropping at a rapid pace due to injury forcing coach Bruce Boudreau to shuffle the lineup on a seemingly nightly basis, the Caps continued to find a way to win.

Some point to forward Jason Arnott – the savvy veteran who isn’t afraid to pull aside his new teammates if their play starts to slip on the ice – as a key to the Capitals’ recent hot streak.

He’s admitted he and Ovechkin have been regular dinner buddies so the Caps captain can pick Arnott’s brain regularly about what it takes to bring home the Stanley Cup.

He’s been credited as one of the few guys capable of getting through to enigmatic forward Alexander Semin.

Well, for better or for worse, you can add a third bullet to Arnott’s D.C. resume – he’s the guy who helped bring country music to the Caps locker room.

“I’d say 70 to 80 percent of the guys in this locker room listened to country at some point growing up,” said defenseman Karl Alzner. “In Canada, it’s big in the locker room – especially in the Ontario League and the Western League – we listened to it all the time. That was our pump-up music, you know?

“Well, some of the new guys who have come in are a little bit older and have some pull around the dressing room, so they threw it on and everyone likes it except for very few people,” Alzner continued.

It should come as no surprise that Alzner was referring to Ovechkin, who will never be confused for a country music fanatic.

“That’s why we get to the rink a little bit earlier, so we can get in a few extra songs before he gets there,” Alzner said with a laugh. “For practices, we’ve been working in more country these days. Game time, it’s usually country until Ovi gets there and puts on his dance music.”

Alzner freely admits that as a rookie, he has very little say in this. But he’s pleased all the same with his veteran teammates who have made it acceptable to play a little country music in the locker room.

And which artists rank as Alzner’s favorites these days? Eric Church and Kenny Chesney are at the top of the list, for those who might be interested.

“I like guys like Garth Brooks and Johnny Cash too, but I’m more of a fan of the newer stuff,” he said.

At that point, forward Eric Fehr, who has never been shy about admitting his love of country music, walked by. I began to ask him about the recent turn of events and before I even finished my question, he was already grinning from ear to ear.

“It’s great,” he said. “In the morning we used to play techno and rap, but it just doesn’t fit. Now we’ve got country playing – at least before practice, which is a start.”

Fehr lists Church and Billy Currington as his current favorites and highly recommends Church’s song, “Carolina” to anyone wanting to jump on the Caps’ country bandwagon. But really, he might as well have said “anything other than Russian techno.”

In fact, that was a constant theme on this day – players admitting how much more relaxing country music is when you roll out of bed as opposed to the high-energy dance music that Ovechkin prefers.

“It’s nice to get a break from the pounding in your head,” said forward Jason Chimera. “We like to slow it down a bit and listen to some real music. Guys like Arnott and [defenseman Scott] Hannan came in and like country music, so it’s nice to have a bunch of guys who like to slow it down instead of having rave music first thing in the morning.”

Chimera said the team has begun to regularly tune in to the Sirius XM country music station on practice days, and his personal preference leans more towards old-school country guys like George Strait, Alan Jackson and Merle Haggard.

Because Arnott and Ovechkin have been spending so much time together, eating dinner together regularly and such, I asked a few Caps if anyone thought it would be possible for Arnott to somehow convince Ovi to embrace this country music takeover.

None of the guys were overly optimistic.

“Accomplishing that would be like winning the Stanley Cup,” Alzner said. “It’s tough to do, but it can be done, I guess.”

Chimera thought it might even be tougher than that.

“The only way that might happen is if we locked him on a farm for a couple of years,” he said with a laugh.”

I’d be willing to bet though, if Arnott helps bring home the first Stanley Cup in Capitals’ team history, Ovechkin would be more than happy to jump on the bandwagon. Hell, if that happens, even I’d be willing to throw on some country.