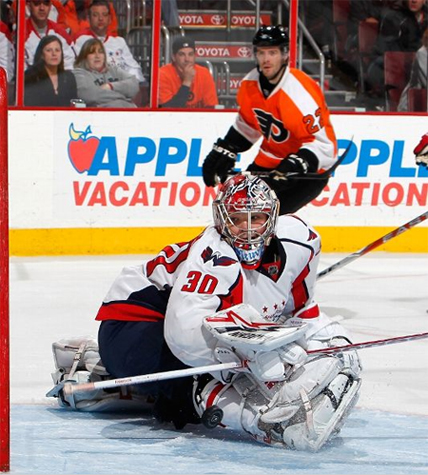 It’s never wise to overreact to the results of one regular game, but fans of the Washington Capitals should definitely think twice before getting overly excited after the team’s 5-4 shootout win against the Philadelphia Flyers.

For starters, the Capitals got outplayed for most of the evening. The Flyers dictated play and were much more physical throughout the contest, but were done in by porous goaltending.

Philadelphia’s rookie goalie Sergei Bobrovsky looked overwhelmed for the get-go – letting in a softie by Caps center Nicklas Backstrom and then failing to get set as Mike Knuble crashed the net.

Bobrovsky gave up a powerplay goal to defender Dennis Wideman in the second minute of the second period and Philly had seen enough. He was given a seat and backup Brian Boucher was inserted into the game.

Had “Bob” played an even remotely average game, only one of those three goals would have found the net and the Flyers likely go on to win in convincing fashion.

Fortunately, the Flyers got below average goaltending while Michal Neuvirth was able to make several key stops for Washington and that was the difference.

But had this been an actual playoff game, there is no shootout. The game simply goes to overtime until one team prevails.

Anyone who watched from the second period on knows the Flyers were the more aggressive team on the ice. Even when they trailing early, Philadelphia had the momentum and there’s little reason to believe that would have suddenly changed had the game not ended in favor of a glorified skills competition.

The Caps, for whatever reason, were content to sit back on their heels as players simply hopes they were able to weather the storm. I kept waiting for Matt Bradley or Matt Hendricks to drop the gloves in hopes of waking up their sluggish teammates, but even those two sparkplugs failed to deliver.

Another reason why Caps fans should be just as worried as Flyers fans about this contest is that too many players were no-shows.

Sure, Alex Ovechkin, Jason Arnott, Mike Green and Tom Poti were all sidelined due to various injuries and ailments, but players like Alexander Semin, Marco Sturm and Brooks Laich were all content to be passengers on this evening.

Revisionist history will suggest that Semin scored the game-clinching goal in the shootout and therefore had a good game. That couldn’t be further from the truth.

With much of the Washington firepower out of the lineup, the Caps needed Semin to show up. But because Philadelphia loves playing an extremely physical brand of hockey, the enigma known as Sasha was a nonfactor.

Let me be clear on this – Semin got hit a few times early and vanished.

This wasn’t even a playoff game (which history shows he fails to show up for), but it was too physical for Semin. So basically he collected a game check to skate a few laps during regulation and then showed back up for the shootout (when no one could hit him).

If you want to take something from this game, then please remember it as a perfect example of why Semin is not the solution for a team looking to finally accomplish something in the postseason.

He’s soft. He hates to be hit. He refuses to crash the net because someone might put a body on him. In the few instances when he gets close to an opposing player, he’s only there long enough to take a selfish stick penalty (in this case, a double minor for high sticking Claude Giroux in the first period).

All of this is why I’d trade him tomorrow if I could. The negatives outweigh the positives for me. Yes, I know he’s capable of single-handedly winning games when his head is in the game.

But he’s the most inconsistent and maddening player in the entire D.C. sports scene. He’s the Albert Haynesworth of hockey – without the knocking up strippers and road rage.

If you’re foolish enough to think that’s the type of player you can build a foundation with, then you can’t be stunned when your team fails to produce in the playoffs.

And on the subject of disappointing, this game showed the first cracks in defenseman Dennis Wideman’s game.

He’s been a blessing since the day he was acquiring from Florida – especially with Green and Poti out of action. But Wideman was awful against Philadelphia.

The Flyers’ first and fourth goals actually deflected off of him. On another play, he failed to pick up the Philly forward who had slipped around to the backside of the net.

So while it was nice to see him pick up his first goal in a Capitals sweater, he should by no means be satisfied with his performance either. Everyone’s allowed to have an off-night, but this should be a game that Wideman studies the film of for at least the next two weeks.

And finally, this is my not-so-subtle plea for the Capitals to sit forward Eric Fehr down for the rest of the regular season.

The shoulder is clearly not 100 percent and while it’s noble of him to keep trying to get back out there and help his teammates, he’s someone who possesses a skill set that this team needs come playoff time.

If you can sit Ovechkin down, then you can sacrifice Fehr for a few more games too. Let the guy heal up and then unleash him on your first round opponent.

That sounds much better than watching him miss the third period of games because he’s too banged up to stay in the lineup.