10 reasons to jump on VCU bandwagon 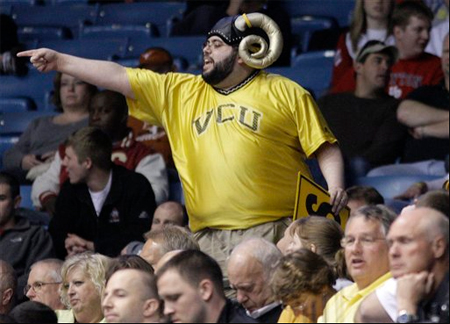 It’s no secret that my team of choice when it comes to collegiate sports is Virginia Tech.

Well, for reasons that remain unclear, the NCAA hates the Hokies so once again they were left on the outside looking in once March Madness began.

With no real team to root for in the Big Dance, I was relegated to the status of “casual observer” until my brother convinced me to join him on the Virginia Commonwealth bandwagon.

Since he’s set to graduate from VCU this May (and therefore knows more about the tournament’s most surprising team than 99 percent of us), I asked him to provide a guest blog on the top 10 reasons why D.C. sports fans should embrace the Rams.

10. Admit it; everyone loves an underdog as proven by George Mason’s 2006 Cinderella run that swept the nation. But Mason is old news now and their season ended with a beatdown. Jumping on the VCU bandwagon now allows you to feel like one of those cool indie kids who listens to underground music no one has ever heard of.

9. I realize seeing black and gold uniforms creates a negative association in many of your minds thanks to a terrible hip hop track, but look at it this way – it’s a lot less creepy when one of the VCU basketball players is hanging out in a college bar than when Ben Roethlisberger does it.

7. VCU’s most famous alumni are David Baldacci and Robb Spewak from the Don and Mike Show … so clearly this year’s hoops team is all we have.

6. The VCU Rams already have more meaningful wins than the Washington Nationals since they relocated from Montreal.

5. And with apologies to John Wall, they’ve got more road wins (just since the tournament started) than the pitiful Washington Wizards.

4. At just 5-10, VCU’s star player Joey Rodriguez is nicknamed “Boo Boo.” So if VCU’s impressive run in the tournament ever gets made into a movie, Rodriguez’s character will be voiced by Justin Timberlake.

3. Unlike BYU, you don’t have to worry about honor code violations getting your favorite VCU players thrown off the team. Virginia is for lovers, so it’s pretty much open season at Monroe Park.

2. If the stars align and VCU goes on to face Richmond in the Elite Eight, it will officially be the most exciting thing to happen in this city since the Confederacy fell to the North in 1865.

1. Prior to this year, VCU’s crowning achievement in the NCAA tournament was upsetting Duke in the first round in 2007. And, if we can all agree on one thing, it’s that Duke sucks.