on the subject of winning streaks … 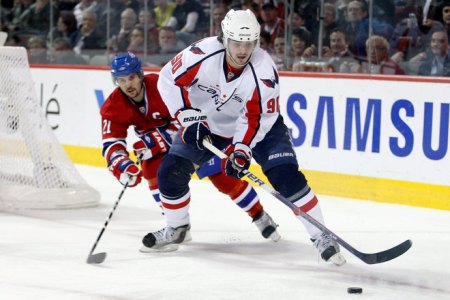 Imagine, if you will, it’s Game 7 of the Stanley Cup Finals.

After years of disappointment, the Washington Capitals finally get their act together to make an extended postseason run and they are one game away from raising hockey’s finest hardware.

As the puck is about to be dropped at a packed Verizon Center, coach Bruce Boudreau sends out a starting lineup of the following individuals: forwards Nicklas Backstrom, Jason Arnott and Eric Fehr, defensemen Mike Green and Tom Poti and Semyon Varlamov in net.

Those six players, with a solid mix of youth and experience, would be a formidable challenge for any opponent. And yet, none of those six players was able to take the ice in the deciding moments of last night’s 4-2 victory over the Montreal Canadiens.

Simply winning a game without that kind of firepower in the lineup is tough. For the Capitals to have won nine consecutive games while having to constantly shuffle the lines because of a rash of injuries and ailments is almost unthinkable.

And somehow, that’s where we are with the Caps. Boudreau seemingly has a new lineup to deal with on a nightly basis, but the players that are available continue to find ways to get the job done.

Of the six players I mentioned earlier, Fehr was the only skater to actually play in the game. But an “upper body injury” knocked him out of last night’s game in the second period. This, of course, is bad news for a guy who already missed 22 games due to a shoulder injury earlier this year.

At some point, you’ve got to believe that all of these mounting injuries will catch up with the Capitals. But in Montreal, the injury-riddled Caps found a way to defeat a red-hot goaltender (coming into the game, Carey Price was 5-1 with two shutouts, a 1.17 goals against average and a .965 save percentage in March) in front of a rowdy hometown crowd.

Of course, just one season ago the Capitals won 14 consecutive games, so this isn’t exactly uncharted territory for Washington’s most consistent winner.

Which is why I’d like to pause for a moment to provide a little perspective on the Capitals. Too many fans have spent too much time this season wringing their hands and stressing out over every little bump in the road, when the truth is this Caps team deserves better.

I mean, let’s take a quick look at the other teams in town and see just how often they’re able to rattle off nine wins in a row.

How long ago was that? Last night’s hero, rookie center Marcus Johannson, was three.

To find the last time the Redskins actually won nine games in a row in the same season, you’ve got to go all the way back to 1991 – when names such as Mark Rypien, Art Monk and Darrell Green ruled the town.

That season ended with a Super Bowl win over the Buffalo Bills. I should point out that last night’s winning goalie, Braden Holtby, was just two when the Redskins held that victory parade.

Things don’t get much better with the Wizards, who last won nine consecutive games in a single season Dec. 6-22, 2001.

That squad, you might remember, was coached by Doug Collins and featured such stars as 38-year-old Michael Jordan, shooting guard Richard Hamilton and center/bust Kwame Brown.

Before that? You’d have to go back to 1978 when they were still called the Bullets. Defenseman Scott Hannan and forward Jason Chimera hadn’t even been born yet.

Surprisingly, the Nationals are the only other local team to put together a 9-game streak in recent history. They’ve only accomplished the feat once since relocating from Montreal, but the team did enjoy one brief glimpse of competent baseball during a 10-game winning streak from June 2-12, 2005.

When the Nats put together that streak, Caps defenseman John Carlson was barely old enough to get his learner’s permit … okay … that’s a cheapshot.

But the fact remains, the Capitals are the only team in town currently worth the price of admission. Even in a season in which they lost eight games in a row, they’ve battled back to put together an even bigger winning streak.

The goals haven’t been scored nearly as often as in seasons past, but no one in that locker room panicked. Instead, they worked harder at becoming a more defensively sound team.

The powerplay has had trouble lighting the lamp on a consistent basis this season, so the penalty kill has responded by getting stronger.

Every single time you try to count this team out, they respond. Just when you wonder if maybe “this isn’t their year,” they surge to within two points of first place in the Eastern Conference.

Shortly after a few vocal idiots begin to call for Boudreau’s head, the team wins its 40th game of the season for a franchise-best fourth year in a row.

What I’m trying to say is this – what you’re seeing now is some of the best hockey the Capitals have ever played. So stop trying to overanalyze everything and simply enjoy the ride.