oilers give up defense for lent 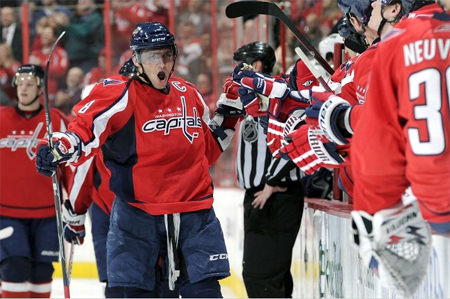 You can watch hockey your entire life and never see a game like the Washington Capitals 5-0 victory over the Edmonton Oilers.

It’s not that they blew out the NHL’s worst team in deciding fashion – that’s happened more than a few times this season. But it’s how the Capitals earned their sixth-consecutive victory that made the evening so memorable for the Verizon Center faithful.

Captain Alex Ovechkin had a three-point night, which gave him 600 career points and moved him into third place on the Capitals’ all-time scoring list. In just his sixth season, Ovechkin ranks behind only Peter Bondra (825) and Mike Gartner (789) in the team’s record books.

But Ovechkin wasn’t alone in the milestone department. Far from it.

Oh, and rookie goalie Braden Holtby notched his first NHL shutout. Like I said, there were more than a few reasons to rejoice for the hometown crowd.

Holtby turned away all 22 shots he faced just two days after blanking Tampa Bay in relief duty after starter Michal Neuvirth was forced out of the game due to injury.

In fact, Holtby hasn’t allowed a goal over the last 104 minutes of gametime – stopping all 43 shots he’s faced as well as all three Lightning shooters during the shootout. To say this is the best stretch of the 21-year-old’s young NHL career would be an understatement.

“It feels good,” he said. “It almost feels better to get the win after an emotional game in Tampa, just to come back and make sure the team played well.”

And let’s not forget, the game was also memorable for forward Eric Fehr, who scored two goals in his first action since missing 22 games due to a shoulder injury.

The Capitals scored their first two powerplay goals of the current winning streak and, amazingly enough, the two strikes ended a 43-game span without multiple powerplay goals in a game – the longest drought in the franchise’s 36-year history.

Ovechkin scored his first powerplay goal at home this season 5:38 into the second period after Arnott set him up with a beautiful slap pass from the blueline.

That’s when Ovechkin, who was quietly waiting on the back post, took the feed, buried it home and enabled the Caps to score the game’s first goal for the first time during the current winning streak.

Roughly five minutes later the Capitals powerplay continued to show signs of life – as Fehr, who was camped out directly in front of the net, corralled a loose puck and stuffed it home to give the good guys a 2-0 lead.

The goal was Fehr’s first tally since Washington’s 3-2 win over Florida, Jan. 8, and it was possible because the 25-year-old did what too many of his teammates simply refuse to do on a consistent basis – he crashed the net.

“I think our power play finally worked,” Ovechkin said. “We scored two goals and we won the hockey game. I can’t remember scoring five goals in a game. It was a good night for us and a good night for the fans too.”

Washington’s third goal of the night is what dreams are made of. It’s easily one of the prettiest goals the Capitals have scored all season and, best of all, it officially ended the competitive portion of the evening.

Ovechkin dove to poke the puck free from Edmonton defender Kurtis Martin, who was able to maintain control of the puck, but wasn’t able to clear it out of the zone.

That’s when Ovechkin swooped in, stole the puck from Martin and suddenly found himself on a two-on-none breakaway with center Marcus Johansson.

Oilers goalie Nikolai Khabibulin froze as Ovechkin and Johansson made a series of tic-tac-toe passes until The Great 8 finally put him out of his misery and scored his second goal of the night.

When asked about the highlight of the night, Johansson had the best response possible – essentially saying “We all knew who was going to take that shot.”

Apparently that was true of everyone except Khabibulin.

Sadly for Oilers fans, that was a theme of the night.

Khabibulin, who won a Stanley Cup in 2004 with Tampa Bay, looked completely overmatched for most of the evening – especially on Ovechkin’s second goal of the night and the Caps’ next goal as well.

On Washington’s fourth score, forward Jason Chimera found himself in a foot race with an Oiler defender as the puck cruised out of the Capitals defensive zone.

As Chimera closed in on the puck right around the Edmonton blueline, he was greeted by Khabibulin, who apparently thought it was a good idea to leave his crease and try to make a play.

If Chimera can’t maneuver past a goaltender who is 40 feet away from his cage, then he shouldn’t be in the NHL, so he made one move past the veteran netminder and fed a pass right in front where, you guessed it, Fehr was camped out once again (notice a pattern?)

Fehr stuffed home his second goal of the night and the game was officially a blowout. The decision to abandon the net as one of the league’s fastest skaters came flying into the zone would have been an embarrassment had Khabibulin been a rookie.

Seeing that kind of boneheaded blunder from a 38-year-old? That’s inexcusable.

The final goal of the night came off of the stick of forward Alexander Semin and it was another dandy. Because the Oilers had given up, Semin and Sturm were on a two-on-one breakaway.

Semin floated a pass over the stick of the one Edmonton defender anywhere near the play. Sturm returned the favor by immediately zipping the puck back to Sasha, who beat Khabibulin with ease.

The Capitals are now 17-0 when Semin lights the lamp this season, which is amazing when you stop and think about the whole “Good Sasha” versus “Bad Sasha” debate.

This is a guy who the front office is clearly hesitant to lock into a long-term deal (with good reason, I might add), and yet, when he shows up, the Caps are undefeated on the year.

Look, I absolutely believe you should never get too high or too low for a regular season contest. And beating the NHL’s 30th ranked squad is hardly reason to throw a parade. But this total-team effort was a sight for sore eyes.

So please allow Caps fans a moment or two to savor this one. Who knows the next time the home team will get to enjoy another one of these laughers.