celebrating with the capitals 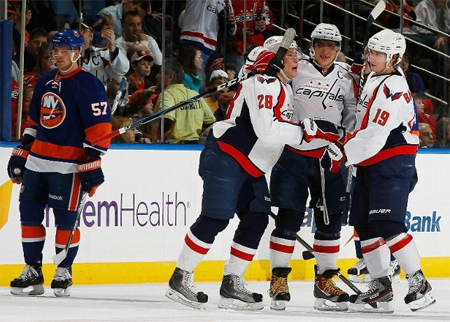 This isn’t exactly ground-breaking news or anything, but it’s safe to say that birthdays typically start to lose their luster right around the time folks turn 21.

Once you’re legally an adult and you’re allowed to buy your own beer, there’s not much else to look forward to – unless you’re dying to rent a car in your name.

Even though my 21st is long gone, birthdays have always held a special place in my heart – mostly because, for as long as I can remember, they’ve been celebrated by taking in a Washington Capitals game.

What started out as a family tradition has long continued into adulthood, and this year my wife and I celebrated the annual tradition with a road trip to Long Island in hopes of watching the Capitals secure victory over the New York Islanders.

Because the Caps are the only team in town worth a damn, it’s no secret that getting the best seats in the house doesn’t come cheap. In fact, a quick scan of the secondary market shows that a person looking to sit right on the glass at the Verizon Center is going to have to spend at least $250 to $350 per ticket.

Hockey might be a blue-collared sport, but the best seats in the house aren’t exactly priced for the blue-collar crowd. Well, at least in Washington.

Islanders games, it turns out, aren’t exactly on the same level as Capitals games. So when we realized the Caps were scheduled to play the Islanders in New York on my birthday, we quickly realized that we could get two great seats for next-to-nothing.

How cheap, you ask? We scored two tickets in Section 102, Row A (face value of $150 per) for a grand total of 97 bucks. That’s after all of the bullshit “convenience fees” and other nonsense.

Even factoring in tolls and gas money, that’s still a much cheaper evening than trying to pull off the same seats for a home game. And as luck would have it, the Caps Road Crew decided to join us.

Well, technically they were making the trip to Long Island with or without my wife and I. But it was nice to see so many other Capitals fans in attendance.

On the way up to the game, a friend informed us that Saturday night’s game was going to be a “white out,” meaning all Islander fans were encouraged to wear white in support of the home team.

Well, I’m guessing we were the only people to get the memo. That’s because – even if you choose to ignore the sea of red in attendance – there were still way more New Yorkers sporting non-white apparel than those actually playing along.

And sadly, apathy was the theme of the evening. Most of the locals we talked to that evening were either Rangers fans who were cheering for the Islanders only because the Capitals are ahead of the Rangers in the standings or had been given free tickets.

In either case, they preferred the New York emerged victorious, but they weren’t going to lose sleep if things didn’t actually play out that way. And look, I’m sure there were plenty of Islanders fans in the Coliseum Saturday night, but they weren’t sitting in Section 102.

Even after the Islanders jumped out to a 2-0 lead in the opening minute of the second period, the building was still dead. Once Caps forward Matt Hendricks dropped the gloves and helped wake his teammates up, the tide officially shifted and the Capitals fans cheered louder and louder.

Handsome forward Brooks Laich found the back of the net midway through the contest and Caps fans erupted. So much so that the New Yorkers sitting behind us leaning forward and said, “This must feel like a home game for you guys.”

I didn’t have the heart to tell him our minor league team gets a better turnout than this. I just nodded politely and let him think that filling up half the building was a good showing.

When forward Mike Knuble scored less than three minutes into the third period, the few Islanders fans in close proximity were convinced the game was already lost. By the time forward Alexander Semin (!) gave Washington the first lead of the night, some New Yorkers were already heading for the exits.

Didn’t matter if there was still nearly 15 minutes of hockey left to play – they’d seen enough. And that’s why I wanted to share this story with Caps fans who are playing the part of Chicken Little as the Capitals navigate through and up-and-down season.

Watching Alex Ovechkin, Nicklas Backstrom and friends light up the scoreboard the last few years has given a sense of entitlement that, if I’m being honest, is completely ridiculous. Why do the Caps own us anything?

What makes them any different than any other team in hockey? Or in any other sport, for that matter?

As far as I’m concerned, the only folks who should be allowed to walk around with a sense of entitlement are fans of the New York Yankees and Boston Red Sox?

Baseball is so screwed up and those two teams spend so much money buying talent that their fans should expect greatness. Thankfully, hockey isn’t like that.

A salary cap and a healthy dose of parity ensure that’s not the case in the NHL. So take a deep breath, Caps fans, and enjoy the show. The Islanders road trip might have started out as a birthday gift, but it ended up giving me a little more perspective on just how much worse it could be.

Sure, it was my birthday weekend, but that doesn’t mean you guys can’t take away something as well.