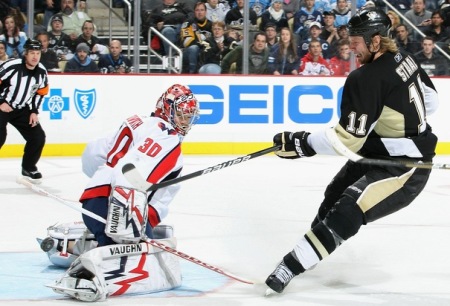 Well, even if you don’t, it’s safe to say that Neuvirth does because he’s now posted back-to-back shutouts of the Penguins in his first two appearances against the Penguins since Bylsma’s infamous line was captured on television.

While forward Brooks Laich has gone out of his way to say he never saw a minute of the HBO series, Neuvirth and most of the rest of the roster happily admit they watched and enjoyed every minute of it. And the usually quiet Neuvirth has been unusually outspoken when it comes to games against Pittsburgh.

“I made a few saves early in the game and I was feeling pretty good,” Neuvirth said. “I was confident the whole game.”

I think it’s safe to say those words were carefully chosen. I mean, confident is pretty much the opposite of shaky, right? At least he was a little more subtle than the last time these two teams squared off.

But honestly, as long as Neuvirth continues to play like this against Washington’s biggest rival – he can do and say whatever the hell he likes. Neuvirth stopped all 39 shots he faced Monday night on top of his 22 save effort on Super Bowl Sunday.

This shouldn’t come as a surprise, but if you post two shutouts in a 15-day span against the hated Penguins … well, you’re quickly on your way to becoming a fan favorite.

Neuvirth had his “A game” from the moment the puck dropped – stopping 18 shots in the first period alone. But it’s not just the sheer number of pucks Neuvirth faced that was most impressive, but it’s the way he played in net all night long that really made this his best effort of the season.

Even with Penguins players such as forward Jordan Staal regularly bumping into him and crashing the crease, Neuvirth refused to get rattled. Pittsburgh might have got the initial shot on net without issue, but there was rarely ever a rebound or second chance.

Neuvirth was that good. He took away the angles and did a masterful job of eliminating juicy rebounds that a blue-collar team like the Penguins typically feasts on.

But really, it was just more of the same for Neuvy this season against Pittsburgh.

Even counting the 3-2 shootout loss back in December – the game in which Bylsma felt compelled to criticize the rookie goaltender – Neuvirth has stopped 86 of 88 shots (.977 save percentage) the Penguins have fired his way this season.

“When I’m on top of my game, my key is not letting any extra shots and to smother everything,” Neuvirth said. “I think I did a pretty good job of it tonight. I don’t think I left too many bad rebounds.

“It was a good game and great effort by the guys to protect the lead in the third period,” he added.

No one knows who will be Washington’s starting goalie come playoff time, but it’s safe to say Boudreau will have to at least give Neuvirth strong consideration if/when the Capitals face the Penguins in the postseason.

And while the offensive juggernaut that was the Capitals one season ago is long gone, their captain appears to be playing some of his best hockey of the season at the perfect time.

Forward Alex Ovechkin scored the only goal of the night on a heat-seeking missile from the point that Penguins goalie Marc-Andre Fleury had little chance of seeing (let alone stopping).

“I had lots of time to see what’s going on, and I just fired it,” Ovechkin said. “We beat a good team in a hard building to play. We got these points, just enjoy our day off.”

After picking up victories on back-to-back nights over Buffalo and Pittsburgh, the Capitals finished their five-game road trip with three wins and two losses. The Caps scored a total of 14 goals while allowing 13 during the extended trip, but the Capitals now have a chance to build some momentum – with three of their next four games at the Verizon Center.

And with the team just one point behind the Tampa Bay Lightning in the Southeast Division, the Capitals actually look like they’re going to make things interesting down the stretch. That hasn’t always been the case this season.

For my money, the Capitals still needs to acquire a second-line center before the trade deadline, and getting forward Eric Fehr and defenseman Mike Green back from the injured list would definitely help the team’s depth as well, but the Caps seem to be playing sound hockey more consistently these days.

Here’s hoping Bylsma or someone else in either Pittsburgh or Tampa decides to share their thoughts on more Capitals players. If Neuvirth’s stellar play is any indication, then I might just have to start making up more bulletin board material to fire up Caps players from here on out.