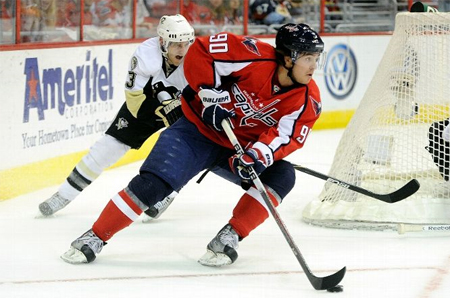 Even though their top-line forwards were held scoreless, the Washington Capitals were able to defeat the Pittsburgh Penguins 3-0 thanks to a total team effort on both sides of the rink.

Never was that more evident than when Capitals forward Matt Hendricks was whistled for goalie interference in the early stages of the second period.

With seconds remaining in Hendricks’ penalty, rookie center Marcus Johansson gathered the puck, accelerated quickly and found himself on a semi-breakaway with forward Dave Steckel.

Once he entered the offensive zone, Johansson feathered a backhander towards the net and Penguins goalie Marc-Andre Fleury inexplicably seemed more concerned with Steckel than the oncoming puck, so it floated untouched into the cage and gave Washington a 2-0 lead.

The tally was Johansson’s first shorthanded goal of his young career and it came at the perfect time –giving Washington a much-needed boost after defenseman Mike Green was knocked out of the game in the final seconds of the first period after a slapshot struck him in the side of the head.

The loss of the team’s top defenseman could have been disastrous, but Johansson’s timely strike turned momentum back in Washington’s favor.

“That was a really nice goal,” said center Nicklas Backstrom. “I asked him about it afterwards and he was surprised it went in. But it was a good shorthanded goal and we haven’t been scoring many of those this year.”

The play was made possible because of everything Johansson brings to the table. He’s solid in the face-off circle and he’s defensively responsible, so his coaches trust him on the ice during penalty kill situations.

What stands out most with Johansson’s game is the speed in which he can accelerate with the puck. That, more than anything, enabled the rookie to get up the ice with enough separation to get the shot off in the first place.

But even when he’s not scoring goals, Johansson’s play of late has earned praise from his teammates.

“Speed is his game, you know, and carrying the puck,” said forward Mike Knuble. “Now you’re seeing some patience. He made a great play to me in the third period when he saw me coming and he kind of let it develop. He let it happen and then gave me the puck right on my stick. I didn’t score, but you want to get those types of chances. They’ll start going in.”

Backstrom, who plays the role of unofficial mentor with his fellow countryman, feels that Johansson’s first-career shorthanded goal is a sign of things to come.

“He’s got a lot of speed,” Backstrom said. “He’s a very skilled guy and he takes care of the puck. And he’s a pretty good shooter. He’s pretty much got everything. The biggest thing he and I talk about is just adjusting to a new league. But he’s coming along.”

And Backstrom isn’t alone in his assessment.

“I’ve informed him a few times how important consistency is for an NHL player,” said coach Bruce Boudreau. “But he’s 20 years old. Sometimes you’re going to get it and sometimes you’re not … Hopefully he’s responsible enough and consistent enough where you can have those kind of games on a day-to-day basis.”

Boudreau compared 20-year-old rookies to having children the same age. He said some nights they come home when they’re supposed to and everything is great. And then, just when you think they’re starting to get their act together, they blow off curfew and they’re out until midnight.

So while Boudreau was happy to see such a strong effort from Johansson against Pittsburgh, he’d rather see that level of performance a few more times in a row before making any bold declarations. Not surprisingly, Johansson’s teammates were of the same mindset.

“I think he’s getting more comfortable out there,” Backstrom said. “He’s getting better and better as he plays more. He still needs to get used to the NHL, where you have to stay focused and be at the top of your game every game. I think that’s the biggest thing you have to deal with – especially at center. It’s a tough schedule and it’s an adjustment, but you’ve got to learn how to deal with it.”

Any rookie getting his first taste of life in the NHL is in for a little bit of a culture shock. How those players respond to challenges such as the aches and pains of the daily grind and the sensory overload of trying to learn a new city, locker room and playing style will ultimately determine who sinks and who swims.

“I thought it would be kind of interesting to watch him this time of year,” said forward Mike Knuble. “Because it starts getting long for first-year players and Sweden is a little slower paced in their season. Ours is really fast – the amount of games, the travel, the practices – it just never lets up. But he’s holding up nicely.

“I think half of it is coming over here and figuring out what it takes to play well every night,” Knuble continued. “I’ve got to win my face-offs. I’ve got to defend in my own end. And then when I get an offensive chance, I’ve got to do what comes natural to me. It takes some time to put it all together and figure it out.”

To his credit, Johansson remains humble even as he starts to impact games on a more consistent basis. While his seven goals and six assists for 13 points in 41 games are nice, Johansson believes his production will continue to improve as he adjusts to his new surroundings.

“Comfort level, that improves every day,” he said. “The [NHL] game is a lot different, but the more you play, the more you get to know it. I’ve gotten more confident as time has gone on and I get to play my own game more. And when you’re confident, you make more things happen.”

Rookies often times talk about hitting the wall that comes from adjusting to an 82-game schedule. No matter how great a prospect is mentally or physically, there reaches a point when the grind impacts a first-year player.

“Yeah, you struggle sometimes,” Johansson admitted. “It’s the best league in the world and when you’re not on top of your game, it’s hard. You have those days sometimes. You’ve just got to learn from it.”

Fortunately for Johansson, he’s got Backstrom in his corner to lend support when times get tough.

“He helps me on and off the ice,” Johansson said. “I’ve just learned from him how he plays the game and how he is as a teammate. I think he’s a really good guy, so I just try to pick up as much as possible.

“Even when he isn’t on top of his game, he always plays good,” Johansson said of Backstrom. “He never really has a bad game. That’s what I want to learn from Nicky. I guess when you don’t feel as well as you can, you still have to play your game, help your team and play solid. It’s a lot to learn and I want to pick up as much as possible.”

With a good support system around him, Johansson can focus on what truly matters most.

“I just try to play my game,” he said. “That’s what’s worked for me so far. I don’t think I should change that. You know, I always play with speed and I want to keep doing that. You’ve got to do what you do – that’s why you’re here.”