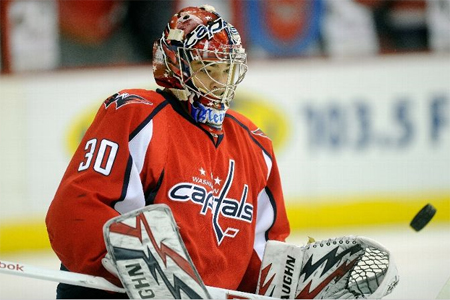 You may remember that during HBO’s 24/7 Caps/Pens series, Pittsburgh Penguins coach Dan Bylsma let it be known that he didn’t think very highly of Washington Capitals goalie Michal Neuvirth.

In fact, he went as far as to tell his players that he thought the rookie goalie was “shaky” and encouraged his players to take advantage of it during an early season showdown between the two rivals.

And even if you forgot that little subplot heading into Sunday’s matchup, there was at least one person in the building who was keenly aware of that bulletin board material.

Fast forward to the end of the game and Neuvirth made good on his word – stopping all 22 pucks he faced in a 3-0 win over Pittsburgh. It was the second shutout of Neuvirth’s young career.

“I’m really happy that I shut them down,” Neuvirth said. “It’s even better for me right now.”

Much like the Super Bowl itself, one of the major storylines of this game was the injury list – with Pittsburgh missing Sidney Crosby and Evgeni Malkin and the Capitals still without Alexander Semin and Eric Fehr.

And okay, Fehr’s name doesn’t carry the star power of the other three gentlemen listed in the previous paragraph, but he was the breakout star of the Winter Classic. So let’s cut him a break.

Even without all of those big-name players, this was a highly enjoyable game for Caps fans – especially those who have been waiting for the Capitals to put together strong showings in back-to-back games since November.

Coming off of an emotional 5-2 win over the Tampa Bay Lightning Friday night – one that featured a complete, 60-minute effort – the hope was that Washington would be able to shake off the normal sluggish start that has been a trademark of these midday matinee matchups. Thankfully, that’s exactly how the game against the Penguins played out.

The Capitals started strong and dictated play for much of the afternoon. And the best part of all was that while the top line provided the bulk of the scoring against Tampa, the rest of the roster was able to pick up the slack against Pittsburgh.

Alex Ovechkin and Nicklas Backstrom combined for three goals and five assists in the win over the Lightning, but were no-shows on the stat sheet against the Penguins. So Brooks Laich, Marcus Johansson and Mike Knuble stepped up and happily paved the way to a Washington victory.

Prior to the last two games, Laich had just one goal in his last 18 games. Now he’s got goals in back-to-back games for the first time since the first two games of the season – including a beautiful hustle goal at the end of the first period to stuff the puck past Pens goalie Marc-Andre Fleury.

The Caps looked even better in the second frame than they did in the first period – with Johansson scoring a shorthanded goal with a “seeing-eye” backhander that found the top shelf early in the second period.

From that point on, it was clear that the Caps were the better team on this day and the only way they’d blow this victory was if the home team collapsed against an undermanned Penguins team that lacked a consistent offensive attack.

The Capitals dominated in the faceoff circle (winning 65 percent), they were perfect on the penalty kill and they outhustled Pittsburgh. Best of all, the Caps displayed a certain level of patience in both wins that hasn’t exactly been a staple of this team in recent history.

In both contests, offensive players never tried to force the play. Against Tampa’s suffocating trap system, the Capitals played the part of a boxer who was happy to take what the opponent gives him. Instead of slamming the foot on the gas, Bruce Boudreau’s players were happy to counterpunch a vulnerable opponent.

It was more of the same against Pittsburgh, with the Caps forwards embracing a dump-and-chase style that only works if you’re willing and able to dig in the corners and fight for loose pucks. They did, and the effort was rewarded with two of the biggest wins of the 2010-11 season.

“We came back off the break and we didn’t think we played very good against Montreal,” Boudreau said. “We know how tough our schedule is. We were on top of our game. When they play that way and they’re committed, it’s a great team effort.”

There was a lot to like with these two games and really, the only negatives that you can really focus on would be the blood spilled by defenseman Mike Green, who took a puck to the side of the head, and Knuble, who was the victim of a high stick to the face.

Green seems to be okay, having received a few stitches Sunday. He was able to speak with reporters after the game and indicated he was willing to go back into the game. Thankfully, doctors held him out to be safe and the Caps were able to close out the game without their top defenseman.

Knuble, on the other hand, remained in the game – even as blood continued to pour from his face. Once trainers were able to close the wound, the greybeard was even able to exact some revenge – getting an empty-net goal to assure that Pittsburgh would not be able to mount any sort of a comeback.

There was a lot to like over the weekend, and the hope is the Caps can continue to build off these two wins – especially with Semin scheduled to return to action this week. If that’s the case, then all of the handwringing that’s been going on in town since November might finally be a thing of the past.

And finally, this was the eighth straight victory for the Capitals on Super Bowl Sunday. So while the local football team refuses to be relevant this time of year, at least one franchise in town is capable of putting on a show on the sports calendar’s biggest day of the year.