learning to love the washington capitals 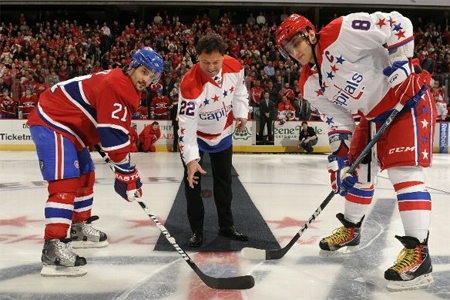 There’s nothing else in the world like being a sports fan. Seriously, it’s crazy when you stop and think about it for a second.

I mean, the highs and lows I feel on a weekly basis thanks to a group of professional athletes brought to my hometown by luck, chance or whatever you want to call it is astounding.

Most sports fans will never have the chance to meet and/or interact with the professional athletes that represent their city, and yet, one untimely mistake by a 20-year-old rookie (who otherwise might never have stepped foot in Washington, D.C. if not for being drafted by your favorite franchise) has the ability to ruin my entire weekend.

The fact that these people carry as much weight in my life as a friend or relative is dumbfounding when you really think about it.

As I get a little older and gain more perspective, I find it easier to accept that my favorite teams can’t win them all. I think it’s safe to say that the Washington Capitals, for example, will never go 82-0. And honestly, even if they did go undefeated, there’d still be a slice of the fanbase who remained incapable of being satisfied.

Last season was the best in franchise history, and it wasn’t good enough for some. A team that lost at least 40 games a year from 2003-04 through 2006-07 finally turns the corner and goes 54-15-13 and all it did was give some fans a sense of entitlement.

Apparently the Capitals are supposed to owe me something because I choose to cheer for them.

I spend a few bucks here and there taking my family out to the Verizon Center and now – all of the sudden – a team that’s never really won anything since the day the franchise was stood up, is expected to flip some magical switch and steamroll the competition on a nightly basis.

Anything less than video game-level blowouts on a nightly basis should result in coaches and players losing their jobs.

And that’s ridiculous. I want to grab the vocal minority – those who tried to start the “Fire Bruce Boudreau” chants during the second period of the Montreal game this week – by the neck and shake some sense into them.

I want to try and make them understand that even if the Caps never win a single Stanley Cup championship in my lifetime, they’ve brought me more joy than any other sports team I’ve ever cheered for.

Back in the day I was the kid sitting in the stands chanting “We Want Pizza!” while praying Peter Bondra scored one more goal so I’d win a free meal I’d never actually redeem. These days, I’m sitting in the press box quietly crossing my fingers that tonight is the night Brooks Laich regains his scoring touch.

Either way you look at it; there are a million worse ways to spend my free time.

All of this leads me to tonight’s highly anticipated matchup between the Capitals and the Tampa Bay Lightning. Once a pushover, the Lightning have quickly morphed into a high-powered offense that definitely resembles the Bruce Boudreau-led Caps we’ve come to know and love.
Their defense is serviceable, but their offense – led by a highly-skilled top draft pick – is what helps them skate to victory most nights. Sound familiar?

Well, because they’re having more success playing up-tempo than the Capitals are, tonight’s game suddenly takes on a larger meaning. Leading by five points in the standings, Tampa has a chance to really put some breathing room between them and the Caps with a win at home.

On the flip side, Washington’s players have admitted that this game is close to “must-win” status if the Capitals are going to have any real chance of winning the division.

“As much as you don’t want to say that, it’s sort of getting that way to keep up with the pace – nobody’s really losing games,” said forward Mike Knuble. “They become must-wins; it’s probably been awhile since we had a must-win in the regular season. We’ve got to consistently get on track and win games it’s the only way we’re going to stay in the race.”

The last “must-win” game the Caps played was the Winter Classic against the Pittsburgh Penguins. And fortunately for the good guys, forward Eric Fehr took over and the Caps earned a convincing 3-1 win during hockey’s biggest game of the year.

But let’s be real – the Capitals have gone just 4-3-5 since that game. So really, how “must-win” was it? Call me crazy, but if you beat the Penguins and then go on to lose four of your next five outings, it kind of negates the victory in Pittsburgh, right?

So that’s why I’m not exactly ready to lose sleep if the Capitals fall to the Lightning tonight. Because even if they win, there’s no guarantee that the magic switch has been flipped and a five-game winning streak is on the way.

And conversely, if they lose, there’s nothing to say the Lightning won’t slump between now and the end of the regular season. There’s too much time left for this game to seal the fates of anyone involved.

This team is flawed. I know that. You know that. Even the Caps have to know it. But that’s not really going to stop me from cheering for them.

Even if they continue at their current mediocre pace and enter the postseason as the fifth seed – only to suffer another early departure, I’m not jumping off the ledge.

Will I be disappointed? Sure. Will I spew venom towards the owner, the coach or the general manager? No thanks.

I want the Capitals to win a championship. I really do. I want them to win it for the diehards who remember back when Dino Ciccarelli actually played for the Caps.

I want them to win one for the loyal fans who, to this day, still know how to spell “Lou Franceschetti” or have a hard time forgiving Esa Tikkanen.

I dream of blowing off work to sneak downtown and be a part of a championship celebration with all of the other hockey fans who also grew up with the Scott Stevens growth poster on their wall.

But if it doesn’t happen this year (or ever), it’s not the end of the world for me anymore.

Maybe it’s a matter of growing older and gaining a little more perspective on life, but these days I’m much more willing to accept the Caps for what they are and enjoy all of the truly great moments they’ve brought me over the years – flaws and all.

Maybe it means I’m getting softer in my old age, but that’s okay. My hope is that more of you can eventually learn to do the same. Trust me; it’s much less stressful on this side.