getting to know scott hannan 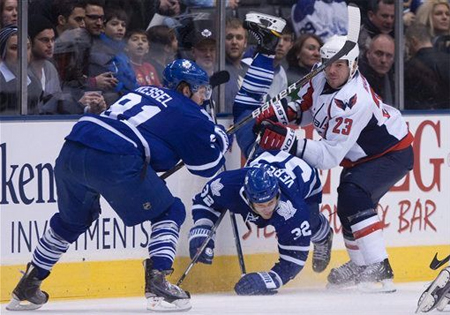 For as long as this incarnation of the Washington Capitals has existed, there has been one constant cry from critics – this team isn’t good enough in its own end to be a legitimate Stanley Cup contender.

Of course, after watching the Caps get bounced in the opening round of the playoffs after taking home the President’s Trophy with a 54-15-13 record last season, it’s tough to argue this point.

You might remember that Washington led the league in scoring last season with 318 goals, while allowing 233 goals against (16th-best in the NHL). And sure, it was fun to watch the high-risk, high-reward Capitals out-gun their opponents, but reasonable fans knew sacrifices would have to be made to transform that roster into a legitimate championship threat.

Well, Capitals general manager George McPhee made a step in the right direction earlier this season when he traded forward Tomas Fleischmann to the Colorado Avalanche for defenseman Scott Hannan Nov. 30.

Dealing from a position of strength (a hot-and-cold third-line forward) for a position of need (stay-at-home defense who isn’t shy when it comes to physical contact), the Caps were able to add a little grit into the line-up without sacrificing any of the team’s major building blocks.

Of course, short-sighted skeptics will immediately point out that Washington went 17-6-2 before the trade and have gone just 10-8-6 since. They’ll also build their case by pointing to Fleischmann’s increased production since he left town as another reason why the trade was a terrible idea.

So let’s go ahead and take a look at those numbers now:

In 23 games for Washington this season, Fleischmann registered four goals and six assists for 10 points while averaging 14 minutes and 20 seconds of ice time.

In 22 games with Colorado, the 26-year-old netted eight goals and 13 assists for 21 points while averaging 18 minutes and 28 seconds of ice time each night.

Now look, Redskins fans will recognize this situation immediately having watched Brandon Lloyd go from one of the least productive seasons in recent history to a Pro Bowler out in Denver. But this might be a little newer for Caps fans, so let me explain this so we’re all on the same page.

Sometimes players need a kick in the pants to get it together. Fleischmann was a good player, but you’d have a tough time arguing he was ever going to be an elite player in Washington. When he was hot, he was a smooth skater with a scorer’s touch.

Unfortunately, he’s also prone to disappear for weeks at a time, so when management was selecting which forwards who shied away from contact were most expendable, his name rose to the top of the list. He’s a nice guy off the ice and an above-average player on it, but he never made himself a player this team couldn’t live without.

[Editor’s note: And as you’ve likely heard by now, Fleischmann will miss the remainder of the season after being diagnosed with pulmonary emboli. That fancy term means Flash is done for the year because he’s got a blood clot in each of his lungs. Like everyone else, I’d like to send my thoughts and prayers to Fleischmann and hope for a speedy recovery.]

Now, even though Hannan has yet to pick up a point with the Capitals, I couldn’t be happier that he’s been added to the lineup. And I’m not alone in feeling that way.

“He’s at the point in his career where he’s been in the league a long time and wants to win a Cup, and I think it completes our defense,” McPhee said after acquiring Hannan. “We’re really happy with the way our defense has been playing, but to add one more guy like this helps.

“Our defense moves the puck pretty well,” McPhee said. “We can generate offense from back there, but to have one more shut-down guy that can block shots; that can do all the little things that would make a difference, we thought was important to add.”

I had the chance to catch up with Hannan recently to ask him how the transition has gone, and I’m happy to report that he couldn’t be happier with his new home.

“I feel like I’m fitting in pretty well,” Hannan said. “This is a great group of guys – same with management. It’s been an easy fit coming from another team. The guys have all been really good to us.

“As far as on the ice, the hockey hasn’t been that much different,” he continued. “I thought it would be a bigger change in system, but they’re pretty similar. There are little differences in the neutral zone and stuff like that, but it’s not too much. You’ve just got to go out and read the play. Hockey is hockey.

“Sometimes it takes a little adjustment,” Hannan added. “The biggest change is just getting used to the players. Learning what their tendencies are – especially with defensive partners. You’ve got to get used to guys and know what they’re going to do out there. That’s probably the tougher transition is getting used to the pairings, being able to read off each other and being able to talk out there.”

Not only is Hannan learning a new system in a new town with a bunch of players he had little to no familiarity with, but he’s now playing for Bruce Boudreau – a coach who has never been shy about mixing and matching his lines on a daily basis. I asked Hannan if this added an extra wrinkle to his learning curve, but he downplayed the situation.

“When I say getting to know defensive pairings or people on the ice; you get to know everybody on your team,” he said. “We switched it up a lot when I played in Colorado too. You’ve just got to get used to the guys and how they play whenever you are. Being from out west, I didn’t get to see a lot of these guys play much. I didn’t get to see how they play, but now with a month in, I’m getting more comfortable. I’m used to how every pairing plays now and it’s been good.”

Of all of the players Hannan has skated with in Washington, he looks most comfortable lining up next to offensive defenseman Mike Green. I asked the 32-year-old if that was the case.

“Yeah, anytime you can get paired with a skater like that, you just give him the puck and watch him go,” Hannan said. “We’ve played well and I think we’ve read off of each other well. But you know, me and Johnny [Erskine] have played together these last couple games and I thought we’ve played well too. He’s a different type of player, but we both like to battle in the corners. He’s a big body out there, so it’s been fun playing with both of those guys.”

I’m always curious when a new player comes to town how much or how little management speaks with them about their role on and off the ice, so I asked the 11-year veteran for his thoughts on the subject.

“I’m here to help out any way I can,” he said. “I’ve got plenty of experience and I’ve been in the playoffs, so I’ve been there before. Anything I can pass along, I’m happy to do it. Other than that, I’m just going to go out and play my game.”

That last point is a big one – Hannan’s teams have made the playoffs eight of his previous 10 seasons. So it’s safe to assume he’s not someone who is going to get rattled easily just because the regular season comes to an end.

Hannan is in the final year of a four-year, $18-million deal he signed back in 2007 when he was with the San Jose Sharks, so I asked him if Washington was a place he saw himself playing in for a while or if he was content to see how the season played out before rushing to any decisions.

“Yeah, for sure,” Hannan said of wanting to play for the Capitals beyond this season. “My wife and me are settling in. It’s a great group of guys and obviously there’s a great deal of talent on this team. It’s a fun place to be.”

This season, the Caps rank 13th in the NHL in scoring (2.8 goals a game), but are playing much better in their own end (2.5 goals against, seventh best in the league) – despite the fact that none of their goalies appear able to remain healthy.

Washington also currently boasts the second-best penalty killing unit in hockey – killing off 85.8 percent of the powerplays they’ve faced this season. Now, we’re not going to try and claim Hannan is the reason for all of the improvements in the defensive zone, but it’s safe to say he’s played a key role.

The Capitals may no longer resemble the run-and-gun team we’ve all come to know and love, but if Hannan and the rest of the defensemen continue to play this well, we might actually get to see more than one round of playoff hockey this time around. Crazy talk, I know.