chimera is the secret weapon 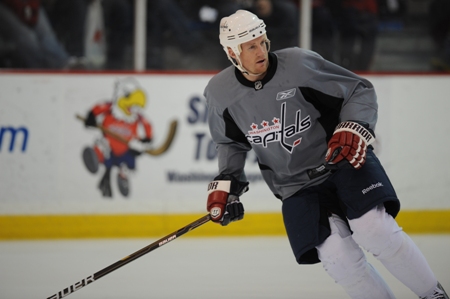 Coming into a Sunday matinee against the Ottawa Senators, Washington Capitals forward Jason Chimera, like far too many of his teammates, was in a slump.

While his game is heavily based on some of the more thankless jobs in hockey – such as fighting in the corners for loose pucks and often times lining up against the opponent’s top skill players – the ninth-year pro is also supposed to occasionally score goals.

So it’s not good when the 31-year-old goes through a lengthy dry spell. In related news, Chimera had just one goal in his last 24 games prior to the Senators matchup.

But as you know by now, Chimera and the Capitals, who had lost four of five since the Winter Classic, put together a strong third-period showing to earn a 3-1 win over Ottawa.

Chimera scored a highlight-worthy goal with less than seven minutes remaining in the contest when he fired a shot from a seemingly impossible angle that caromed  off of Senators goalie Brian Elliott’s back and into the net.

“Sometimes you try and bank if off [the goalie], and that time I did and fortunately it went in,” Chimera said in the post-game locker room. “Nine times out of 10, it doesn’t go in.”

It was exactly the kind of break that Chimera and the Capitals in general have needed of late. I caught up with Chimera the day after to learn more about what went through his head when trying what basically amounts to a desperation shot.

“Well, I was going to the net with it and driving hard, but it was one of those things where he went down a little early, so I thought I’d try and bank it off him,” he said. “Fortunately, it worked. It’s nice when it works out the way you planned it.”

Those are those kind of goals that make the highlight reels and get the fans really fired up. It’s got to feel pretty good to score one like that, right?

Highlight worthy or not, I’m guessing it’s nice to just see a puck finally find the back of the net again …

“I think I usually score more goals than I have been, I’ve just been a little snake-bitten of late for whatever reason,” he said. “But it’s nice to get some goals. Anytime guys like me or Hendy [Caps forward Matt Hendricks] or Fehrsie [forward Eric Fehr] score goals, we usually win the games. We have a pretty good record when any of us score goals, so we’ve got to find a way to keep scoring goals for the team. When other guys aren’t scoring, we’ve got to step up.”

Hockey players are known to be some of the most superstitious creatures on the planet. When you go into a dry spell like this, do you do anything out of the ordinary to switch things up?

“Not really,” Chimera said. “I just try to stick with it and not change too much. You don’t want to question yourself too much or think too much. When you start over-thinking things, that’s when you have a problem. I don’t really have any set routines. I have a family, so whenever the kids nap; I nap. Mostly I try to work around them.”

All game long it seemed like you guys were grinding and grinding, but nothing really going your way, and then, all of the sudden, the offense explodes for two goals in less than a minute and it reminds everyone how potent this offense can be …

“Yeah, you’ve got to give credit to Ottawa,” he said. “They played good defensively for the first two periods and then I think we started to play a little better at the end. We seemed to be playing tentative and they were playing really good defensively. They’re known as a pretty good defensive team, but we started doing the little things right and started getting pucks deep. When [Caps forward] Brooks [Laich] scored it was a big lift for us and we seemed to have a jump in our step after that.”

When he said the team had a pretty good record in games he lights the lamp – he wasn’t kidding. In fact, counting the playoffs, the Capitals are 12-1-1 when Chimera scores a goal.

With that kind of guaranteed production, someone needs to whisper in coach Bruce Boudreau’s ear that the next time he feels like shuffling the lines, maybe he should consider throwing Chimera onto Washington’s top line. Sure, there’s already a pretty solid left wing already in place there, but even the Russian Machine, as awesome as he is, can’t match those results.