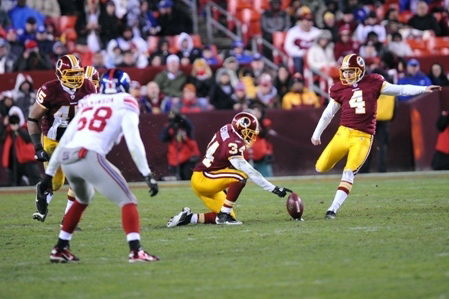 There are many reasons why the Green Bay Packers defeated the Philadelphia Eagles 21-16 in the opening round of the playoffs Sunday.

Packers quarterback Aaron Rodgers threw three touchdown passes and finished the day with a passer rating of 122.5. Rookie running back James Starks, a sixth-rounder out of Buffalo, rushed for more yards against the Eagles (123 yards) than he did all season (101 yards). Defensive standouts Clay Matthews and Charles Woodson did their best to throw off Mike Vick and the Eagles offense.

So any of those individuals would be deserving of a game ball in Green Bay’s victory.

But what stands out most the day after is the fact that David Akers, Philadelphia’s Pro Bowl kicker, missed field goal attempts from 41 and 34 yards out. Had he made both of those two kicks, it’s very likely the Eagles would still be in the postseason and Rodgers would still be searching for his first-career playoff victory.

“We can all count, and those points would have helped,” Eagles coach Andy Reid said.

Such is the life of a kicker. You make it, and you get a pat on the helmet. You’re anything less than perfect every time you take the field and critics start calling for your head.

I bring up Akers because he’s the name most frequently mentioned when folks around town start talking about Washington Redskins kicker Graham Gano.

As you may remember, Akers was a member of the Redskins back in 1998. As a 24-year-old rookie, Akers attempted two field goals – both from 40-plus yards out. He missed on both of them.

Head coach Norv Turner and friends made a rash decision and released Akers, who went on to become a five-time Pro Bowler (including each of the past two seasons) for Philadelphia.

Meanwhile, the Redskins have seemingly had a revolving door at kicker ever since the day they sent Akers packing. Sure, Gano kicked three overtime winners in 2010, but for as promising as he’s looked at times, he still finished the season with the lowest accuracy rate of any kicker in the NFL (68.6 percent success rate).

I guess people look at 23-year-old Gano and see similarities between his situation and 24-year-old Akers, so they’re willing to overlook the fact that he converted just 12 of 17 field goals from 39 yards or closer. They figure he’ll eventually get his act together and pray it happens here instead of with another division rival.

Personally, I have no clue whether or not Gano is the long-term answer for the Redskins, but I have discovered his good luck charm. Gano may be wildly inconsistent in the kicking game this season, but there is one player who seemingly had a calming effect on the second-year pro – cornerback Byron Westbrook.

I have no clue how or why Westbrook earned these additional duties, but the 26-year-old has become Washington’s unofficial kicking tee.

As you can see from the photo above, whenever the football fails to stay upright in the kicking tee on a kickoff, Westbrook is called upon to fill that role. He must then take a knee and hold the ball in place with his pointer finger until Gano is able to kick the ball to the opposing team.

For the year, Gano kicked the ball off 71 times this season and had nine touchbacks (12.7 percent). Well, the three times Westbrook held the ball for Gano all resulted in touchbacks (that’s 100 percent, if you’re scoring at home).

That stat, more than anything tells me Gano is a much better kicker when Westbrook is involved. Out of curiosity, I asked Westbrook how he got those duties.

“I don’t think I drew the short straw,” he said. “I think it’s the big straw because you’ve got to have the best hands on the kicking team. It means I’ve got the best hands out there and they trust me to hold the ball. And every time Graham kicks when I hold the ball, we have a touchback.”

With all the troubles the Redskins have had on special teams this season, maybe we should get you more involved. Maybe we should lobby to have you become Gano’s full-time holder.

“Well, we’d have a touchback all the time,” Westbrook said with a laugh. “I think it’s great that they trust me to do it, so I go out there and do the job. Hopefully he’ll continue to kick a touchback every time I’m involved.”

Now, we joke about you being the guy who the team asks to fill in for a piece of plastic, but the truth is we’ve seen a lot more of you on defense in the second half of the season. Everyone knows you can play on special teams, but how do you think you did on the defensive side of the ball?

“Man, I think I did good,” he said. “There were some mental mistakes, but that stuff will come with more experience playing the nickel. I hadn’t played nickel all year – not even in the preseason. We’ve had Carlos [Rogers] in there, we had [Justin] Tryon and we’ve had Kevin Barnes also in that role. I was only playing as an outside corner, but when it comes to gameday and how many corners we had active – they needed me, so I went in there even though I didn’t have a lot of practice at it. I just had to go out there and do what I could to help the team.

“I’m glad they gave me the opportunity to do that,” Westbrook continued. “Because I think I’m more than a special teams guy. I think I can help this team on defense as well. You never hope for injuries – especially with the defensive backs because we’re such a tight-knit group. But when a guy goes down, you’ve just got to step in and make sure you play at the same level.”

So how does the backup kicking tee plan on spending his offseason?

“The plan is to rest my body for the first couple weeks and then, maybe in February, start getting back into training and stuff like that,” he said. “We’re just hopeful that the CBA [collective bargaining agreement] will get done, and then everything else can start to fall into place.”

Westbrook has proven to be a dependable special teams player and has been solid in his limited reps on defense. But if he wants to truly make his mark in Washington, he’ll lobby to be Gano’s full-time holder.

Because if he can be the guy to help Gano reach his true potential, then he’ll become the most beloved Redskins player on the roster today.