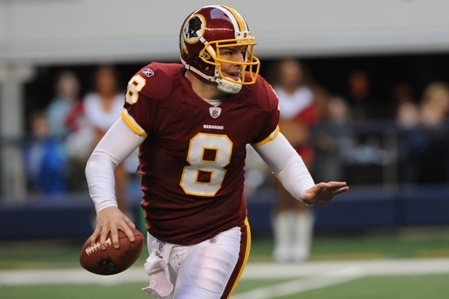 1. I cannot stress to you how awful Rex Grossman is at protecting the football. Seriously, words aren’t enough, so I’ll turn to numbers to illustrate my point. Grossman, as you no doubt know by now, turned the football over eight times in his brief time as a starting quarterback.

Conversely, Donovan McNabb coughed up the ball 16 times in 13 games. Over the course of a full 16-game season, McNabb was on pace to turn the ball over 20 times. I think we can all agree that’s not very good — especially for a quarterback who is, statistically speaking, one of the least intercepted passers in NFL history.

So how bad was Grossman? If he continued to be as careless with the football over the course of an entire 16-game season, he’d turn the ball over an astounding 43 times. That’s impressive, even for a guy with 56 turnovers in 37 career games played.

2. Speaking of Grossman, in addition to being a turnover machine, he’s also fairly predictable as well.

When attempting passes outside of the numbers, Grossman went 20 of 44 for 230 yards with one touchdown and four interceptions. That’s good enough to earn him a 31.4 quarterback rating.

Now, let’s compare that to his statistics when attempting passes in the middle of the field. In those situations, Grossman completed 54 of 68 passes for 654 yards, with six touchdowns and no interceptions. That’s good enough to earn a 136.1 passer rating.

To recap: Grossman gets sacked once every eight times he drops back, he has no real pocket presence which is why he was on pace to set records for the most turnovers in a season and he can only complete passes in the middle of the field. But other than that, he’s great.

Unless your last name is Shanahan, you better pray like hell the Redskins use a draft pick on a quarterback.

3. Sticking with the passing game, receiver Santana Moss set a career high for receptions in a season with 93, which is the second most in franchise history behind Art Monk’s record 106 catches in 1984. If it seemed like the Redskins went to Moss early and often, it’s because they did.

In fact, Moss was targeted 145 times – which comes out to 24.3 percent of the team’s total pass attempts. The only NFL receivers who saw the ball come their way more often in 2010 were Roddy White, Reggie Wayne, Larry Fitzgerald, Brandon Lloyd and Brandon Marshall.

One more random nugget about Moss – he’s a much more dangerous player on the road than he is at FedEx Field. In home games this season, Moss had 55 catches for 585 yards (10.6 yards per catch) and one touchdown. But away from home, Moss caught 38 passes for 530 yards (13.9 yards per catch) and five touchdowns.

4. It should come as no surprise that the second-most targeted Redskin was tight end Chris Cooley, who had 126 passes thrown his way (21 percent). In related news, Cooley finished the season with 77 catches for 849 yards and three touchdowns.

Digging a little deeper, here’s Cooley’s catches broken down by quarter – 16 in the first, 13 in the second, 19 in the third and 26 catches in the fourth quarter. So if you were one of the fans complaining that the offense often times forgot about their Pro Bowl tight end until the second half … well, the stats seem to back you up.

5. While we’re on the subject of tight ends, I wanted to point out one more area of interest. Specifically, I want to talk about the most under-utilized weapon on the roster – Fred Davis.

We’ve already established that 45 percent of the team’s pass attempts go to Moss and Cooley. Davis, on the other hand, was targeted just 28 times in the 2010 season (which translates to four percent).

But even though the ball rarely comes his way, Davis makes the most of his limited opportunities. In his three seasons in Washington, Davis has 72 catches for 852 yards. During that same timeframe, Cooley has 189 catches for 2,030 yards.

Where Davis stands out though is the touchdown department – hauling in nine TDs compared to just six for Cooley. If the coaches are smart, they’ll go to Cooley early and often, but if they want to see more consistent production in the red zone, they’ll start drawing up plays for Davis.

One final stat on Davis – all three of his touchdowns this season came in the first half.

6. If it seems like running back Ryan Torain specialized in getting off to a fast start this season, it’s because he did.

During the 2010 season, Torain had 91 first-half rushing attempts for 477 yards (5.2 yards per carry) and two touchdowns.

In the second half though, Torain was far less effective – rushing 70 times for 269 yards (3.8 yards per carry) and two touchdowns.

Those numbers suggest that as the game goes on Torain starts to wear down, which makes sense given his physical style of play.

Those numbers – even before the words “injury prone” come into play – don’t exactly make the argument that Torain should be considered a lock to be the feature back in 2011.

7. During a post-game interview after the season finale, defensive end Adam Carriker said something interesting to me. For those who missed it, here’s what he had to say:

Well, it turns out Carriker was telling the truth. In the first 14 games, Carriker had a half of a sack, nine pressures and 17 defensive stops. Over the final two games though, he picked up a sack, five hits and nine defensive stops.

8. I think it’s safe to say the NFL season takes its toll on Redskins linebacker Brian Orakpo. While he’s easily considered one of the best and brightest young players for Washington, statistics show a troubling trend – the colder it gets, the worse the second-year standout plays. Case in point:

Factoring in Orakpo’s four-sack effort against Oakland in 2009, that means he’s accrued 12.5 sacks in 16 first-half games and just 3.0 sacks in 14 second-half games against teams that don’t employ JaMarcus Russell.

It should also be noted that Orakpo missed the only game of his career in the second half of a season – with the Texas Longhorn missing the Dec. 26 game against Jacksonville this season due to groin and hamstring injuries.

In case you forgot, linebacker London Fletcher had a 27-yard interception return for a touchdown against Arizona in Week 7, meaning Hall’s touchdown against Dallas in the season opener snapped a 42-game scoreless streak for the Redskins defense.

10. Kicker Graham Gano wasn’t very good this season, no matter which way you spin the numbers. His 68.6 conversion rate this season was the worst of every NFL kicker who attempted enough field goals to qualify.

If that’s not bad enough, the only consistent aspect of Gano’s game this season was his inconsistency. Gano went eight for 10 for 20-29 yards out, four for seven from 30-39 yards, 11 for 14 from 40-49 yards and missed all three attempts from 50 or more yards out.

Maybe the Redskins should consider utilizing two kickers next season – Gano on the road and anyone else at home.