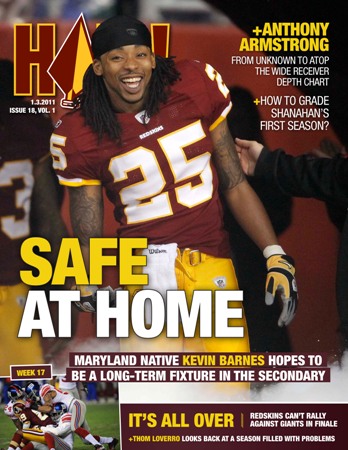 [As you can see, the new issue of Hail! magazine, our free digital publication dedicated to the burgundy and gold is now out. Here is a sneak peak of my feature story in this week’s issue on Redskins cornerback/safety Kevin Barnes.]

When Washington Redskins cornerback Kevin Barnes was younger, he didn’t dream of being a professional football player. The truth is, he always wanted to play basketball.

The only problem was, at his height, it was point guard or bust in the NBA. That wasn’t really all that appealing to Barnes, so instead of being one of the shortest players on the court, he opted for a different career path.

“There’s not too many 6-foot-1 shooting guards out there,” Barnes admitted. “So I went for football.”

Once he set his sights on the NFL, Barnes knew what position he wanted to play – running back.

“I loved watching guys like Barry Sanders and Eddie George, but I never filled out like those guys,” said Barnes, who is listed at 185 lbs. “So I ended up playing safety in high school and corner in college.

While Barnes didn’t become the next great running back, he did make a name for himself as a highlight-worthy cornerback at the University of Maryland. One play in particular — in which Barnes hit an opposing player so hard he actually vomited on the field — has immortalized the 24-year-old.

“I remember when [Barnes] laid my boy [California running back] Jahvid Best out with a big hit in college,” Redskins linebacker Lorenzo Alexander said. “He’s always been a big hitter. That’s nothing new to his game, but it’s why I really respect him. You see a lot of those cover guys who don’t want to play physical – who don’t want to try and lay anybody out. He’s more than willing to do it. He’s known as a big hitter on our team.”

While that play might not be one of Best’s favorites, Barnes has no problem admitting how much that one play has helped his career.

“It was very important to me,” he said. “Until that point, my stock was rising as far as being a draft prospect, but when that play happened, I was able to create a major buzz about my game. Four or five games later I hurt my shoulder, but that play, as well as how I had played earlier that season, kept me on the radar with scouts and coaches.”

In 2009, the Redskins used a third-round selection, the 80th pick overall, on Barnes. Unfortunately for the rookie though, Washington went just 4-12 and Barnes saw action in only four games.

“It was definitely a humbling experience,” he said. “I knew for a fact that I was busting my butt like no one could imagine in practice, so it was more of a mental thing. Coming from college I was a pretty good player and then to barely play at all was humbling. But at the same time, I tried to take positives out of it by learning from veterans who have had success in this league.

“It is a sweeter feeling though to get out there and earn some playing time now,” he said. “It would be a lot sweeter if we were winning, but we’re going through this together. Don’t ever count out the Redskins. We’re down right now, but we will rise again.”

While the Redskins finished a season with a losing record for the sixth time since 2002, Barnes can be viewed as one of the few bright spots in 2010.

After being stuck on the depth chart behind established veteran cornerbacks like DeAngelo Hall, Carlos Rogers and Phillip Buchanon for much of the season, Barnes found new life as a safety.

Because of injuries to LaRon Landry, Kareem Moore, Reed Doughty and Chris Horton, Barnes was asked to fill in against the Dallas Cowboys at a position he hadn’t taken a snap at since high school.

“He did really good,” Hall said. “I think he can be a heck of a safety in this league if he wants to be. He was flying around and sticking his head in there so much that coaches actually said he did a better job tackling as a safety than he did as a corner.

“He’s a hungry guy,” Hall continued. “He wants to be out there on the field. He made a comment to me about not being able to get on the field at corner, so he was talking about wanting to move to safety a while ago. He’s a ball hawk. You guys haven’t really had the chance to see it in games, but we see it every day in practice. From last year until this year he just keeps getting better.”