who is the strongest redskin? 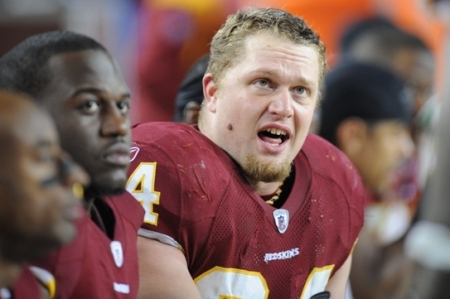 Thankfully, more times than not, I am in attendance each and every week when the Washington Redskins are in action.

I say thankfully because I’ve reached a point where I can barely stomach the majority of the announcers who call NFL games, and let’s be honest – when your favorite team is 6-10, you’re not exactly getting the cream of the crop every Sunday.

At any rate, I was on the sidelines at FedEx Field as the Redskins were in the process of losing 17-14 to the New York Giants this past weekend when I got a text message from my brother. He was enjoying the game from the comfort of his home when the announcers said something that caught his attention.

Apparently, in the days leading up to the regular season finale, Redskins defensive coordinator Jim Haslett told them that, for his money, defensive lineman Adam Carriker was his strongest player. And of course, if you’re an announcer who is given this information during your game preparation, you’re going to share that during the course of the broadcast.

Well, as someone who has covered the hell out of the 2010 Redskins, that statement was interesting to me because Carriker has a friendly rivalry with veteran defensive end Phillip Daniels. They both play the same position and they both really do get along, but that’s not stopping either of them from claiming that they are the strongest player on the roster.

Armed with this information, I sought out both Daniels and Carriker in the post-game locker room to get their take on Haslett’s bold declaration.

“That don’t mean a thing,” Daniels said with a laugh. “Adam’s his boy, you know. He drafted him in St. Louis and so he’s gonna defend him every way he can. Coach Haslett has never been in the weight room to see us lift. Everybody is gonna take his word for it, but they need to come to Monster Garage Gym and get the real deal.”

Now, I’ve been to Monster Garage and have seen firsthand the type of powerlifting training you’re referring to. It wasn’t something I had ever experienced before, so I’m curious, can Carriker do what you do?

“I don’t think he can do some of the stuff I do, as far as the deadlifts and squats,” Daniels said. “He said the most he’s going to put on his back is 500 lbs., so we’ll never know. Me, I push the limits. I plan on lifting 800 lbs. this offseason. That’s my goal.”

Having heard what Daniels had to say on the subject, it was now time to give Carriker his fair chance to rebuttal.

Let me reiterate that these two guys are very close. Even as they were trash talking, both of these men were laughing and enjoying the chance to talk about something other than controversies involving disgruntled defensive linemen and/or benched quarterbacks.

The truth is, they enjoy hanging out and really push each other – both on the field and in the weight room. Strength and conditioning coach Ray Wright told me earlier this season that Daniels and Carriker are the two strongest guys, but no one is in a hurry to declare either the undisputed winner.

And since I had the chance to chat with them both one final time before the offseason, I took the opportunity to ask them each a few extra questions about topics other than their friendly rivalry.

One of the things that stood out to me most the final month of the season was just how often Carriker began to make his presence known in the backfield. I was curious what had changed as the season went on, so I asked the Nebraska standout about it.

So are you one of the guys who feels it’s a bummer that the season is over?

“Yeah, it is, but at the same time we’ve got this whole offseason,” he said. “The second season is so much better than the first – especially when you go from 4-3 to 3-4 – when everyone gets more familiar with it. It’s going to be that much better next year.

“I think tonight’s a great example of what we can do,” Carriker continued. “I think we outplayed them. I think we were the better team, but we cost ourselves. That’s why they won. We’ve got to eliminate those mistakes – the big pass, the turnovers and things like that. We’ve proved we can be a good team. We just have to get rid of those stupid little mistakes.”

Speaking of next season, there’s no certainty that 37-year-old Daniels will be back in the burgundy and gold in 2011. So I asked him about the situation and his thoughts heading into free agency.

“I hope to be back, man,” Daniels said. “It’s been positive with the coaches and I’m getting a positive vibe that they want to bring me back. You know, I had a good year being a backup in this system. You’re not going to find another guy – younger or not – that can do what I can do on the field. Hopefully they’ll bring me back and I’ll be able to do the same things out on the field – help them out on goal line, short yardage and those kind of things. I’ll be the backup for Adam and whoever is here, and it’ll be a good thing.”

And if you’re back next season, how much change needs to take place at Redskins Park before this team can finally get it together and start winning football games on a consistent basis?

“We don’t need a whole lot,” Daniels said. “It’s been evident these last couple of weeks. We’ve had a lot of injuries, but guys have played hard. We just need a few pieces here and there on the offense and defense and we’ll be okay. I don’t think you need to tear it all apart. We learned two new schemes and it seems to me that as the year went along, we got better in those new schemes. I think a lot of positives came out of this.”