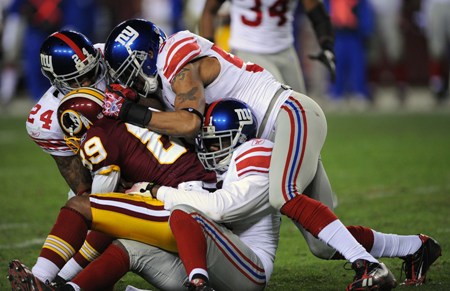 Mercifully, the Washington Redskins’ 2010 season is over, thanks to a 17-14 loss to the New York Giants at FedEx Field Sunday.

The game, in many ways, represented the season as a whole – with the Redskins outplaying their opponent for much of the day, only to fall short because of self-inflicted issues. Sounds familiar, right?

Missed extra points. Failed two-minute drives. Blown 17-point leads. Untimely turnovers. Seriously, that’s how it’s been all season long – regardless of the opponent, the Redskins have done as much to lose games as they have to win them. So why not end the regular season on the same depressing note you’ve played the rest of the year?

And honestly, I could go on about the strong play of Santana Moss and Anthony Armstrong, the promise of Ryan Torain at running back or the potential we’ve saw at the end of the season from Kevin Barnes at safety and Anthony Bryant at nose tackle, but let’s not kid ourselves — the better team won yesterday and the Redskins have some work to do before they can compete with the big boys.

And while it hasn’t really mattered who the opponent has been this season, the fact is, the Redskins simply cannot beat the Giants.

Sunday’s game was New York’s ninth victory in their last 10 games against Washington – with the lone setback coming at the hands of quarterback Todd Collins in a game with 60-mile-per-hour winds back in 2007. Otherwise, the last five years worth of games have been nothing but frustrating for the burgundy and gold.

In fact, the Giants have outscored the Redskins 242-134 over the last 10 matchups, which quick math says comes out to an average score of 24-13.

When your average result over a five-year period is a double digit loss to your supposed rival, there’s something wrong. So when you’re dreaming up your wishlist for Santa next year, please remember to add “See the Redskins defeat the Giants again before I die” near the top of the list.

You don’t need fancy statistics to know that when your team turns the ball over four times, you’re not going to win many games.

Likewise, fancy charts and graph aren’t needed to illustrate that a kicker who can’t consistently make 30-yard attempts should not consider making long term plans in town. So there’s no real need to beat that dead horse.

But I will say this to anyone who believes that Rex Grossman should be given an opportunity to be the team’s starter in 2011 – the guy is a turnover machine. He’s always been turnover prone and yesterday showed his biggest weakness – he has no pocket presence. It’s as if he has no clue when a defender is closing in on him.

Some quarterbacks have an uncanny ability to feel when a pass rusher is closing in on them, which enables them to step up in the pocket to avoid the pressure. Not Grossman. He stands there blindly as if the thought of someone pursuing him from the blind side isn’t even a remote possibility in his world.

In related news, Grossman has 56 turnovers in 37 career games played. On a team that has very little margin for error, you simply cannot rest your hopes on a guy that careless with the football.

4. “Gimme Some Truth” by Pearl Jam

Look, I’m not an overly positive guy. I’m typically someone who expects the worst, so if/when things play out that way I’ve already prepared myself for it. It’s my defense mechanism for coping with years and years of disappointing results with my favorite sports franchises.

But there are a few reasons for cautious optimism as we turn our attention to 2011 and beyond. First of all, the Redskins began to see improved play on the field once the bulk of the “name” players were no longer in the lineup.

Donovan McNabb, Albert Haynesworth and Clinton Portis might all sell jerseys, but none of them did much to help the Redskins win football games in 2010. And while the team finished the season losing seven of nine games, the fact remains that the Redskins looked like a much more competitive team over the last few games when a bunch of nobodies saw ample playing time.

Maybe this will finally be what it takes for the front office to give up on chasing names and embracing team players who fit a specific role. Over the last decade or so, the Redskins have been built to win on paper and in video games. Maybe now they’ll finally embrace building a team that can win on a football field.

The other reason why ‘Skins fans can hold out hope that this team might not be as far off as their record suggests comes straight out of the history books.

Let’s jump back to Joe Gibbs’ first year back after his retirement. In 2006, the Hall of Fame coach took over the Redskins after two underwhelming seasons of Steve Spurrier calling the shots. (You may recall that he was an entertaining individual, but he was in over his head as a head coach.) Well, in Gibbs’ first season back, he guided Washington to a 6-10 record.

In his second season back in Washington, Gibbs guided the Redskins to the playoffs with a 10-6 record.

In related news, Shanahan – who is a future Hall of Famer – took over the Redskins after two underwhelming seasons of Jim Zorn calling the shots. (You may recall that he too was an entertaining individual, but was also in over his head as a head coach.) Well, in Shanahan’s first season back, he too guided Washington to a 6-10 record.

I’d also like to point out that one other time in Shanahan’s career he had a team finish 6-10. That was in 1999, and the following season his Denver Broncos went 11-5. I’m not saying the Redskins are a lock to make the playoffs next season.

I’m just letting you know that great coaches – including Shanahan himself – have been in this position before. And if history is any indication, we should be in much better shape next season … assuming there is a next season.