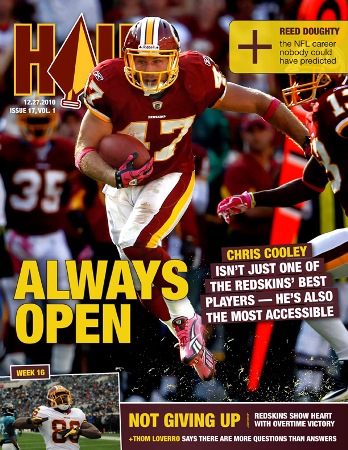 [As you can see, the new issue of Hail! magazine, our free digital publication dedicated to the burgundy and gold is now out. Here is a sneak peak of my feature story in this week’s issue on Redskins tight end Chris Cooley, D.C.’s favorite athlete.]

As a 4-year-old, Chris Cooley used to dress up in his John Elway jersey – complete with helmet and pads – and play imaginary football games in the backyard.

Although he was young, Cooley was as passionate about the Denver Broncos as any season-ticket holder.

“I’d bawl if the Broncos lost,” Cooley admitted. “Football is something that’s meant a lot to me from a pretty young age.”

You can imagine how Cooley handled it when Elway and the 1987 Broncos won eight of their last nine games to make it to the Super Bowl – only to get blown out by the Washington Redskins 42-10 on football’s biggest stage.

But even watching the Broncos’ most heartbreaking losses only reinforced what Cooley already knew – he absolutely wanted to be a football player when he grew up.

“As a kid you always aspire to be a professional athlete,” he said. “At least I did. If it’s not sports, then there’s something else you want to be when you grow up. But, as a kid, I was very good at all sports. I excelled at everything I played and it’s what I wanted to do.”

While Cooley knew he could play, he didn’t get a chance to play with the varsity team until he was a senior in high school and Utah State was the only college to offer him a scholarship. Not exactly the kind of start most athletes dream of.

“I always loved football and I always knew I was good at football; I just wasn’t getting the opportunity to play,” Cooley said. “I ended up starting the last four or five games my junior year and we had a pro scout come out and watch our film. He grabbed me and said, ‘Hey, I put a fifth-round draft grade on you. I just thought I’d let you know because you’re probably going to start receiving some attention.’”

Although playing in the NFL was always the dream, until that point it appeared as though Cooley would have to do something else with his life after college.

In the days leading up to the 2004 NFL draft, Cooley had his first interaction with the Redskins. The Powell, Wyoming, native visited Redskins Park, and then went out to dinner with Hall of Fame head coach Joe Gibbs and a host of others.

“I was intimidated,” Cooley said. “They said we were going out to dinner, so bring nice clothes. I had a $12 white button-up shirt, some Dockers and Doc Martin shoes. I’m sure I looked like a poor kid from Utah.”

His fashion sense aside, Cooley made enough of an impression on the organization that he was drafted in the third round with the 81st overall pick. And he’s been one of the organization’s most prominent players ever since.

“He came in and had some unbelievable games against Dallas early on, plus the whole Captain Chaos thing and he really took off with the fans,” Redskins safety Reed Doughty said.

Even though his numbers speak for themselves, Cooley’s lighthearted side – whether he’s wearing booty shorts during training camp or introducing himself to the opposition as a fictional super hero – is what has helped him become a fan favorite.

While Cooley might downplay it, his teammates have no issue putting into words what the 28-year-old means to the burgundy and gold.

“All he does is make plays for us,” Redskins center Casey Rabach said. “When we need a clutch catch out of someone, it seems like Chris is always that guy. He’s definitely someone you can build a team around.”

It’s one thing to play football at a Pro Bowl level. It’s another to welcome the world into your life as Cooley has done.