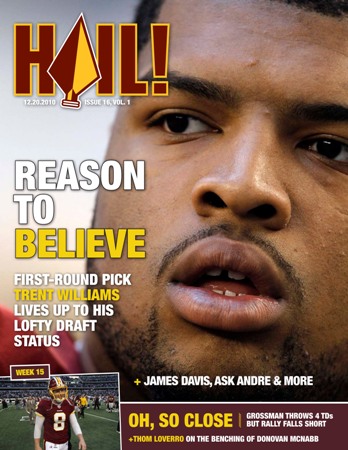 [As you can see, the new issue of Hail! magazine, our free digital publication dedicated to the burgundy and gold is now out. Here is a sneak peak of David Elfin’s feature story in this week’s issue on Redskins left tackle Trent Williams as his rookie season comes to an end.]

Ten years ago, Washington’s rookie left tackle, the third overall pick in the draft, had what he called an up-and-down season during a very disappointing year for the Redskins.

This year, Washington’s rookie left tackle, the fourth overall pick, is equally dismayed with his debut during a very disappointing season for the Redskins.

The tackle from 2000, Chris Samuels, made the first of his six Pro Bowls with Washington in just his second season. So if history repeats again, then Trent Williams, who succeeded Samuels this year while being mentored by his predecessor, has plenty to look forward to in 2011.

Those who have worked with him and against the 2009 All-American from Oklahoma are pretty impressed right now.

“Trent’s had some up and downs like all rookies have, but he’s done an excellent job,” said Samuels, who has worked as a volunteer assistant line coach this year. “The sky’s the limit for the young guy. He can be one of the best ever if he keeps working hard and stays hungry. He’s more athletic than I was.”

Right tackle Jammal Brown, like Williams a first-rounder (13th overall by New Orleans in 2005) out of Oklahoma, likes what he sees from his protégé.

“Mentally, Trent understands the game better,” said Brown, who made two Pro Bowls as a left tackle for the Saints. “When you first come in, you’re so worried about doing things right, you don’t look at the whole picture. He’s starting to see more of the whole picture. I was very athletic, but Trent’s ahead of where I was, especially how he moves lateral and how he moves backwards. Put some technique to that, he’ll be hard to reckon with. “

Dallas Cowboys outside linebacker DeMarcus Ware, one of the game’s elite pass rushers, beat Williams for a sack in his debut but said the rookie is no easy mark.

“He’s going to be a really good tackle,” Ware said on the eve of their rematch. “He’s very athletic. He run-blocks very well. He pass-blocks very well. He’s been improving every week. From the first time I faced him ‘til now, the little things that he had problems with, he’s corrected.”

Because Williams holds himself to such a high standard, he looks forward to a rematch with a pass-rusher who he feels might have gotten the best of him.

“Sometimes when they get to the quarterback, it can be a coverage sack or the quarterback didn’t step up in the pocket, but I blame myself if my man touches the quarterback,” Williams said. “When DeMarcus got a sack in my first game, that was my fault. He’s a tremendous player and I’m just excited to have another chance to go against him and kinda measure my progress from Week 1 to Week 15. I feel like my knowledge of the game has progressed a lot. We’re gonna see how much I’ve progressed physically.”

Of course, the 6-foot-5, 318-pound Williams has always been big, strong and athletic. He grew up in Longview, Texas in a two-bedroom, one-bathroom house that at times accommodated eight people.

Williams’ best friend dating back to elementary school was a quick running back in training named Chris Ivory, now with the Saints. And when Williams reached high school — where he played with teammates Malcolm Kelly and Robert Henson — he was an offensive power in football and a defensive force in basketball.

“When I was young, I always pictured myself in the Pro Bowl, but I played basketball in high school, too,” Williams said. “I was a center. I was pretty good. I stopped growing when I reached about 6-5. I’d like to say I was an all-around player, but I think my defense kinda kept me on the court. I blocked shots, took charges, the whole nine yards.”