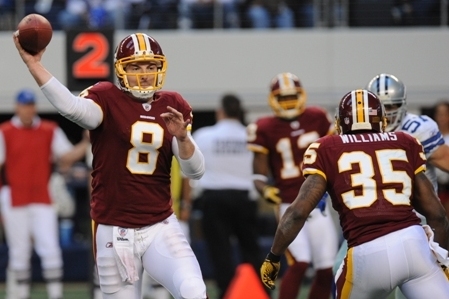 It should come as no surprise that the Washington Redskins lost 33-30 to the Dallas Cowboys at Cowboys Stadium. After all, the Redskins have lost six of their last seven games after starting the season 4-3.

But the story of this game is the fact that the Redskins officially ended the Donovan McNabb era and willingly turned the football over to backup quarterback Rex Grossman.

Forget pedigree. Forget resumes. Throw out accolades and accomplishments. In the end, head coach Mike Shanahan and offensive coordinator Kyle Shanahan decided they’d rather have the Redskins offense run by The Rex Cannon.

“I thought Rex did an excellent job today,” Shanahan said. “I wanted to give him an opportunity and I thought he took advantage of that opportunity. It’s always tough when you don’t play for a while, especially with the type of week we had in practice, the conditions were a little tough, but he did a good job. He came back in the second, demonstrated a lot of poise and played well.

It’s a crazy turn of events – considering all the talk of how Shanahan never won a Super Bowl in Denver without John Elway, and all of the comparisons between McNabb and Elway during the offseason. With that in mind, it’s nearly impossible to imagine that it took just 13 games to decide the Redskins are better off without McNabb.

But that’s where we are, and now it’s simply a matter of how the Shanahans choose to end the McNabb era. Do they handle the situation with class and show respect to the veteran on his way out the door or do they continue to attack McNabb’s character as they did earlier in the year when benching him against Detroit was justified by questioning Donovan’s intelligence and conditioning?

If I had to guess, I’d say the dynamic coaching duo doesn’t suddenly flip a switch and handle McNabb with grace and class. But hell, after this, nothing these two do would really surprise me at this point.

2. “Welcome to the Family” by Avenged Sevenfold

So how did Grossman do in his burgundy and gold debut? Well, he had a pretty outstanding showing – completing 25 of 43 passes for 322 yards with four touchdowns, two interceptions and a fumble and a quarterback rating of 93.4.

The offense was nowhere to be seen early, but Grossman didn’t panic. He calmly let his teammates know that they were only a play from turning things around and then, surprisingly, Grossman began to deliver.

“We didn’t get a lot of things going early,” Grossman said. “[We] couldn’t pick up a first down to try and get through our game plan, but once you make first downs and get able to run all the plays that are in the game plan that offensive coordinator Kyle Shanahan drew-up, then you can start attacking what they’re doing on defense.”

It’s no coincidence that Grossman gave a shoutout to the younger Shanahan in his post-game comments. The two aren’t exactly kindred spirits in the sense that former Redskins backup Todd Collins and former offensive coordinator Al Saunders were, but the two obviously have a comfort level and familiarity with each other.

No one can argue with a straight face that Grossman is a better quarterback than McNabb. But what the Shanahans have said definitely over the last few days is that in their opinion, Grossman is better suited to run their offense.

In the season opener against Dallas, receiver Miles Austin had a field day – finishing with 10 catches for 146 yards and a touchdown against Washington’s secondary. This time around, it was Cowboys tight end Jason Witten who couldn’t be stopped – racking up 10 catches for 140 yards and a touchdown as Redskins defenders bounced off of him and struggled to slow down one of the NFL’s elite tight ends.

On the day, Witten was targeted by quarterback Jon Kitna 12 times and caught 10 of them. You got the feeling that Dallas could have thrown every single pass at their Pro Bowl tight end and the Redskins couldn’t have stopped him.

The Redskins defense actually did a good job of pressuring Kitna throughout the game, but when he was able to get the ball out of his hands, it typically ended up in the hands of Witten, who responded with a 14-yard-per-catch average.

The worst part? Nearly all of Witten’s catches came in the middle of the field. It’s never a good sign when your defense is that vulnerable up the middle, and Witten’s strong showing only solidified concerns about some of the current faces on the back half of this defense.

It would be difficult to find a player less popular in Dallas than Redskins receiver Santana Moss – who is openly referred to as a Cowboy killer for his consistently strong performances against the ‘Boys.

So it seems only fitting that if Redskins’ offense was to suddenly wake from a season-long slumber, it would be in large part because of Moss (Sidenote: Cowboys fans also noticed Grossman wearing #8 because more than one Dallas fan mentioned to me the déjà vu they felt as a quarterback rocking Mark Brunell’s old number connected with Moss seemingly at will)

For the day, Moss had eight catches for 72 yards and two touchdowns. And thankfully for everyone involved, he was less stressed in the post-game locker room than he was a week ago when he seemed on the verge of tears after such a disappointing 2010 season for Washington.

“I had confidence that we would finish the game strong, period. I don’t look at the points. You see it, but you don’t look at it like, ‘I’m down 20 now, so I’m going to stop playing,’ You have to go out there and take every play one play at a time. And whether you score on that drive, you keep giving yourself the opportunity to climb closer.”

Quit possibly the oddest site Sunday was watching a newly-demoted McNabb jog out to participate in the coin toss as a team captain for the Redskins.

Several players said McNabb is still very much a leader in the locker room and therefore, it didn’t seem unusual to them at all to see the 11-year-pro in that role before the game, but it definitely stood out to me as I watched from the sidelines.

Maybe it was something that the coaching staff simply overlooked this week, but I’m of the mindset that maybe it’s best for everyone involved if Grossman or anyone else from the offense participate in the coin toss the last two weeks of the season. Hell, since John Beck has moved ahead of McNabb now on the depth chart, let’s give that honor to him.

I just can’t imagine any team – even one as dysfunctional as the Redskins – trotting out their third-string quarterback in a ceremonial role like that. You’re either making a mockery out of McNabb or the role of team captain (or both), so why not give the honor to Cooley. After all, it’s been a while since we’ve seen Captain Chaos make an appearance.