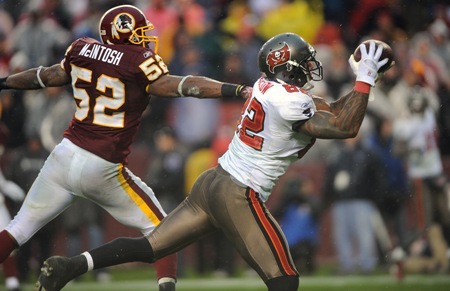 It’s not that the Washington Redskins lost 17-16 to the Tampa Bay Buccaneers at FedEx Field Sunday. After all, they’ve lost plenty of games over the last decade or so. But it’s how they lost that makes this game stand out.

Just when you think you’ve seen it all, the Redskins go and find a new and creative way to frustrate their fanbase – botching an extra point in the deciding seconds to ensure that overtime wasn’t needed.

Seriously, we’re talking about an extra point. A gimme. A freebie. It’s supposed to be automatic, which is why college football makes teams go for a two-point conversion in overtime. The NCAA figures that a game could conceivably go on forever if teams were able to just kick extra points.

And yet, our beloved Redskins found a way to screw it up.

“We win as a team and we lose as a team,” said quarterback Donovan McNabb. “We don’t point fingers nor do we blame anyone. I think each and every person can take something out of that and say, ‘If I would have done this, it would have given us a better chance of winning it.’ You tip your hat off to a young team. Tampa just continued to be resilient and kept fighting and found themselves scoring a touchdown when they needed it and had our backs against the wall for a minute. Offensively we were able to get things going and got down to score a touchdown. We just weren’t able to finish.”

There are probably 10 other moments in this game that reasonable human beings like McNabb can point to as a missed opportunity for Washington, but this is the lasting image that folks will remember for the foreseeable future.

2. “Full Of Regret” By Danko Jones

The reason this loss is so disappointing is that the Redskins, thanks to the return of running back Ryan Torain, jumped out of the gate and looked as though they might cruise to a convincing victory over a battered and bruised Buccaneers team.

After just six carries, Torain had 101 yards rushing. By the time the first quarter was over, Torain had 121 yards on the ground and the 24-year-old had 158 rushing yards at the half. It was the best first-half performance by any running back in the NFL since 2005, and yet, the Redskins still couldn’t win the game.

“It was nice to see Ryan come back,” said head coach Mike Shanahan. “You are never really sure how a guy is going to come back after he has been out for a while. I thought Ryan came back and did everything he has to do. Unfortunately, with a couple of three-and-outs at the start of the second half, all of a sudden before you know it, it is in the fourth quarter and we are just kind of looking for a first down to get some momentum going.”

There are a lot of players in that Redskins locker room who should be doing some serious soul searching this morning. Torain, who was playing for the first time since Halloween, is not one of them. If he can ever find a way to stay healthy, there’s little doubt Torain could be the team’s feature back moving forward.

Unfortunately for everyone involved, history shows that’s far from a certainty.

The reason the Redskins weren’t able to pull away from Tampa Bay is twofold. First, the offense is awful in the red zone. Washington is a team with very few playmakers that already struggles to put points on the board in general. But once they get in that red zone, with less room to work, they very rarely are able to punch the ball into the end zone.

So the Redskins often times have to turn to special teams to put points on the board. The problem is, the kicker Graham Gano leads the league in missed field goals this season – converting just 22 of 32 attempts on the year (68.8 percent).

The scouting report used to be that Gano was money from 40 yards and in, but struggled on longer kicks. Well, after blowing a 34-yarder and a 24-yarder yesterday, the 23-year-old is officially vying for least popular Redskin after Albert Haynesworth was suspended for the rest of the season.

“I don’t have any excuses; I just have to do better next time,” he said after the loss.

Gano should be thankful that Shanahan is a forgiving coach. Otherwise, there might not be a next time.

But this game, more than any other one in 2010, has me questioning the Redskins’ play calling. I don’t know if the finger should be pointed at Shanahan the coach or Kyle Shanahan, the offensive coordinator. But someone needs to realize that what we’re seeing week in and week out is stale and unimaginative.

Torain averaged more than seven yards a carry on the day. So why on earth did he only rush for 14 yards the entire second half? That’s inexcusable. How do you completely forget about the one player on your entire offense who was willing and able to put the rest of the team on his back?

Watching Torain’s career-best outing wasted only reinforced my belief that even though the talent level on the current Redskins isn’t great, this coaching staff doesn’t do themselves any favors. It’s why I harp on the fact that backup tight end Fred Davis is so underutilized or why I pull my hair out when it takes the team until the fourth quarter to remember a Pro Bowler like Chris Cooley is in the lineup.

The first half was clinic on how to pound the football down an opponent’s throat. And for reasons known only to the Shanahan clan, that stopped in the second half. Now, if the play callers wanted to mix in some play-action passing, with McNabb rolling out of the pocket and targeting his tight ends, that would have been great. The defense was already on its heels thanks to Torain. But they didn’t even try that. And they didn’t bother to even take a shot at throwing the ball downfield. Instead, the offense went back to stale and vanilla.

In related news, the Redskins fell apart in the second half and lost a game that the Buccaneers had no business being in. What a disgrace.

Now, Tampa Bay’s game-winning touchdown was not without controversy. Bucs quarterback Josh Freeman connected with tight end Kellen “I’m a soldier” Winslow II on a 41-yard bomb, but the play never would have happened if not for an obvious hold by tackle Donald Penn on Redskins linebacker Brian Orakpo.

“I was very stunned, because that was one of the most blatant ones, almost like Dallas,” a heated Orakpo said after the game. “It was ridiculous.”

Unfortunately, the back judge, who is the referee in position to make that call, wasn’t doing his job, so the touchdown was allowed to stand.

Orakpo was asked if he needs to start lobbying more with the referees since this appears to be a weekly occurrence.

“I try not to resort to that because I just want to play the game, but maybe I’m going to have to let those guys know,” he said. “It’s been consistent year round. Every week I’m drawing holding calls. I can’t name one game I haven’t. I don’t know man. It’s very frustrating because that was a huge play that could have turned the game around if I make that play. I’m right there and somebody’s around my neck. It’s not fair to our team and not fair to our defense that’s been working so hard throughout the game.”

It’s bad enough the Redskins keep finding new ways to disappoint, but seeing the referees miss such a blatant penalty only adds insult to injury. It’s days like this that drive Redskins fans to drink.