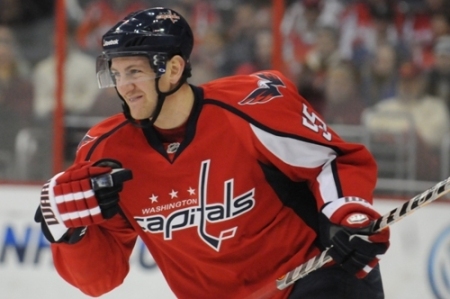 You ever have one of those days when you wish you could just crawl back into bed?  That’s pretty much the only way to describe the feelings defenseman Jeff Schultz felt after the Washington Capitals lost via shootout to the Toronto Maple Leafs Monday night.

Not only did his team find a way to blow a 4-1 lead in the third period against a mediocre opponent that had lost eight-straight road games, but the 24-year-old was forced out of the game midway through the second period with a broken thumb that reportedly will sideline him for four to six weeks.

I had the chance to catch up with fourth-year pro Tuesday to see just how bad the injury is and to see if there’s any chance he’ll be able to play in the Winter Classic on New Year’s Day.

“I broke the top bone in my thumb and they’re saying three to four weeks,” he said. “I’m crossing my fingers for less time with the Winter Classic coming up.”

How long did it take for you to realize that now because of this injury, there’s a pretty good chance you’ll have to miss the Winter Classic?

“Yeah, it’s one of those things that everyone wants to play in,” Schultz said. “But I want to be good enough condition and strength wise to not be a liability out there. I don’t want to be out there hurting the team. I want to be able to do my job and make a difference.”

As if the loss and the broken thumb wasn’t bad enough, Schultz also took a stick to the face courtesy of Maple Leafs forward Colby Armstrong just under six minutes into the game. Like I said, clearly this wasn’t his day.

“I was struck in the face with a high stick and got this nice little scratch on my face here,” he said. “But they were penalized on the play and I think we scored on the powerplay, which was good.”

[Editor’s note: The Capitals didn’t actually score on that particular powerplay, but after the rough night Schultz had, I didn’t have the heart to tell him.]

Fortunately you didn’t need stitches for that cut, but seriously – at some point I think it’s pretty clear that Toronto was gunning for you. What on earth did you do to piss them off?

“I don’t know if I did anything wrong to them, but I was a wanted man,” Schultz said with a laugh. “Clearly they did their job out there and beat me up pretty good.”

You ever had another night even close to this, where no matter where you are or what you do, pucks and sticks are just flying right at you?

“There’s been a couple times where you block a shot or something like that, but nothing where big injuries like this happen,” he said.

Schultz was actually at Kettler Tuesday afternoon to sit down with a camera crew for HBO’s high-anticipated 24/7 Penguins/Capitals: Road to the Winter Classic to talk about his injury. With that in mind, I asked for his thoughts on the Capitals opening the door to give fans an all-access peak.

“Entourage is my favorite show, so yeah, I was excited about HBO,” he said. “But I hadn’t ever seen the New York Jets show, so I didn’t really know what to expect.”

Although Schultz wasn’t familiar with the Hard Knocks franchise, he quickly discovered what makes the series so wildly popular – HBO has cameras everywhere. Like all day every day, which is why they’re able to show fans everything from a football player trying to name all eight of his kids to a head coach encouraging his players to have a snack.

“You’re sitting in a meeting and then you see guy standing behind you with a big microphone,” Schultz said. “It definitely takes some getting used to.”

While that’s become normal for reality-television types, it’s not something a hockey team deals with routinely. For a guy as quiet and reserved as Schultz … well, you can guess how much of a shock to the system all of this is.

I told Schultz that inevitably, these shows have a way of creating a star out of one of the lesser-known players. Sure, stars like Alex Ovechkin or Mike Green will have a camera trained on them throughout the entire process, but a show like Hard Knocks has a way of introducing the world to a role player like Jon Conner, a fullback nicknamed “The Terminator.”

I asked Schultz if he was prepared to be the breakout star of HBO’s 24/7 show and he politely declined. His best guess at who could fill that void came down to Matt Bradley, Jason Chimera or maybe Eric Fehr, but only “if they got him singing his country music or something.”

We can only hope it doesn’t come to that.