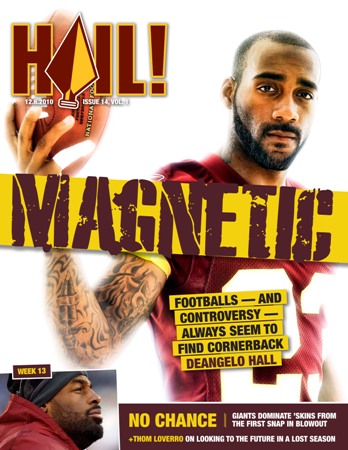 [As you can see, the 14th issue of Hail! magazine, our free digital publication dedicated to the burgundy and gold is now out. Here is a sneak peak of David Elfin’s feature story in this week’s issue on Redskins cornerback DeAngelo Hall.]

When Hall isn’t getting into with an opponent – whether it be a star receiver like Carolina wide out Steve Smith or a head coach like Atlanta’s Mike Smith – Hall is speaking his mind in the locker room, demanding to cover the top opposing receiver.

One thing is clear – Hall isn’t a shy guy, on or off the field. If he’s got something to say, Hall isn’t going to hold back.

Since Hall came into the league seven seasons ago, only Philadelphia Eagles cornerback Asante Samuel has more interceptions.

“If I see the ball in the air, I feel like it’s mine,” said Hall, who has recorded six of his 32 career interceptions this season, including a record-tying four in Week 7 at Chicago. “I’ve always felt that way. I don’t know if it’s the receiver in me [he played some at Virginia Tech]. Offense gets the glory, ain’t no secret about that, but defense wins the games. I love the contact of defense. If I had a choice at this point, I wouldn’t go back and play receiver. But I think I’d be a damn good one.”

Hall, who has also returned kickoffs and punts as a pro, certainly has the hands to switch sides of the field.

Chosen eighth overall by Atlanta in the 2004 draft, Hall made the Pro Bowl in his second and third seasons and could well be headed back to Hawaii this January.

“He’s one of the better corners in the league,” said Redskins first-year defensive coordinator Jim Haslett. “I think he can get up there in double digits [in interceptions].”

Hall’s six picks this season are the most by a Redskin since 1999. The last Washington player with more than seven was Barry Wilburn in 1987 and the last to reach double digits was Hall of Fame safety Paul Krause in 1964. No one in the NFL has topped 10 since 1981.

“Leading the league in interceptions would be nice, but it’s not that important,” the 27-year-old said. “I’m so over that stuff. Pro Bowls, they’re cool, but they’re not as exciting anymore. My rookie year that’s all I wanted. Came out the next year and got it and the year after that. But I want to win fucking games. As you get older, you understand that.”

Hall is certainly not an older player, but he has been through plenty during his career. He helped the Falcons reach the NFC Championship Game his rookie year, but coach Jim Mora Jr., whom he loved, was fired after the 2006 season and replaced by Bobby Petrino with whom he clashed.

During a divisional matchup in 2007, Hall held Smith without a catch into the third quarter before drawing three penalties in succession. The rapid-fire calls enraged Hall, who had to be restrained from going after Petrino and an assistant coach when they sniped at him about the penalties.

“Had that happened in the last two years, I think I would’ve taken it from him, kept playing my game, killing Steve Smith, which is what I was doing,” Hall said. “After the game, we woulda sat down and we’d talked civilized or MF’d each other. Instead, for just a second, I lost my head. The whole situation, the way I handled it, that just showed my immaturity.”

Smith and new general manager Thomas Dimitroff took over the Falcons in 2008 and promptly traded the volatile Hall to Oakland. After just eight games, the struggling Raiders stunned the NFL by cutting Hall, who was happy to sign with the Redskins.

“This is the place I always wanted to be coming out of high school [Deep Creek in Chesapeake, Va.], coming out of college, a place I thought was gonna draft me,” Hall said. “When I left Atlanta we were trying to work something out here, but they couldn’t agree on the compensation.”