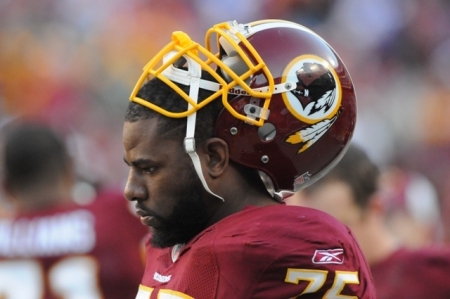 What if, to steal a phrase from the immortal Denny Green, the Washington Redskins are who we thought they were?

What if they really are an 8-8 team at best? What if the cupboard was truly so barren when general manager Bruce Allen and head coach Mike Shanahan took over that it really was going to take multiple seasons to turn this franchise into something resembling respectability?

On this week’s episode of Skinscast, I was down on the Redskins. Like, really down. As in, I went on record as saying that if someone could guarantee that Washington would win two of their last five games – which would mean a 7-9 season – I said I’d take it in a heartbeat.

My thought process is that there are so many areas of concern on this roster that there’s little reason to believe this team is capable of putting together a streak like 2005 or 2007 to sneak into the postseason.

Think about it – Shanahan is a two-time Super Bowl winning coach who has a history of turning ordinary running backs into 1,000-yard rushers seemingly overnight.

His son, Kyle, was the man behind the Houston Texans’ dynamic passing attack that just one season ago was best in the NFL.

His quarterback, Donovan McNabb, is a six-time Pro Bowler who easily ranks among the best at his position over the last decade.

And yet, the Redskins offense is terrible. They rank 21st in the league in yards, 25th overall in points per game and give little reason to believe when the game is on the line that they’re capable of doing anything remotely special.

Did the head coach, offensive coordinator and quarterback all suddenly forget how to play football? Did they lose their mojo simply by coming to town? Are the Redskins really that cursed?

Let’s be honest – what we’re seeing has nothing to do with the team lining up against Washington week in and week out. No, everything wrong with the burgundy and gold comes down one glaring weakness – the offensive line.

Look, it’s no secret that the former regime openly neglected the offensive line. Why draft a guard when a receiver or safety is still on the board? People don’t buy jerseys of offensive linemen, so why even bother?

Skill positions are much more enjoyable to watch film of, so it was easy for Vinny Cerrato to pause his Saturday morning cartoons to watch highlights of a raw Michigan State receiver tearing up the Big 10. I mean, doesn’t that sound way more fun than watching two fat bodies do battle in the trenches?

People don’t pay attention to that. They’d much rather see a cornerback take an interception to the house or pass catcher turn on the burners during a 40-yard bomb. So year after year the Redskins used the precious few draft picks they held onto on glamour positions. And now the franchise is paying the price.

I, by no means, claim to be an NFL talent evaluator or scout. I’m simply a guy who has stood on the sidelines for six seasons now watching the Redskins up close and personal.

As best as I can tell, the Redskins currently have one and a half offensive linemen that they can build off of.

Obviously tackle Trent Williams, the team’s top pick in the 2010 draft, is a keeper. He’s had an up and down inaugural campaign as he’s been asked to take on some of the best pass rushers the NFL – Mario Williams, Ndamukong Suh and Jared Allen in particular had little trouble getting to the quarterback – has to offer, but it’s clear the kid has skill. The longer he’s around, the better he’ll be.

Jammal Brown, the team’s right tackle, is finally starting to look healthy and, in related news, has fared much better the last few weeks as opposed to earlier this season when every time I noticed him, he was picking himself up off the ground.

He’s a guy who played at a Pro Bowl level in New Orleans, but the knock on the six-year pro is he’s never been healthy enough to play a full 16-game season. When Brown missed the entire 2009 season due to a hip injury, the Saints finally grew impatient and traded the 29-year-old to Washington for draft picks.

This season alone, Brown has been knocked out of the lineup with knee injury in the Green Bay game and a concussion in the second Philadelphia game. He’s clearly a talented player when he’s healthy, but that’s far from a given with Brown.

And yet, as far as I’m concerned, those two guys are the only bright spots on the offensive line. Things only go downhill from here.

At guard, Kory Lichtensteiger and Artis Hicks have done nothing to show that either of them should be considered a long-term solution and Derrick Dockery is obviously not a Shanahan guy. If Lichtensteiger and Hicks are your first two guys off the bench, that’s one thing. But neither inspires confidence and both guys get pushed around far too frequently.

Which brings me to center Casey Rabach. Look, I fully admit that I am a big fan of Rabach the person. By all accounts he’s a good dude and he’s always been a stand-up guy who provides great quotes. But that doesn’t mean fans should turn a blind eye to the issues this offensive line has up the middle.

When an 11-year veteran like McNabb is 50/50 to take the snap and get away from the center without being stepped on, then you know there’s a problem. At 34, the guy didn’t suddenly forget how to play the game. His offensive line is getting blown back so quickly that he’s basically got to backpeddle as quickly as possible to get out of there alive.

And let’s not forget that the Redskins’ ground game racked up 29 measly yards on 13 carries against Minnesota. Youngsters like James Davis and Keiland Williams might someday blossom into bona fide NFL studs, but with this offensive line, they were fighting just to get back to the line of scrimmage.

Think about it – Clinton Portis may or may not be done and Ryan Torain may or may not be an injury-prone player who never lives up to his potential. But the fact is, any running back with at least 25 carries under his belt this season has been knocked out of action.
That’s because this offensive line is below average by nearly any possible statistical measure. Case in point:

So if you’re wondering why the Redskins have thrown more interceptions than touchdowns (13 to 11), is converting only 27 percent of their third downs or has had 12 different running backs on the roster this season, it’s because the offensive line is failing.

It’s not a coincidence that Jason Campbell goes to Oakland and suddenly guides the Raiders to their first three-game winning streak in recent history or Javarris James goes from the Redskins practice squad to touchdown machine for Indianapolis. They’re now playing on teams that acknowledge the importance of depth in the trenches.

The Colts and Raiders have each drafted 19 offensive or defensive linemen since 2004. The Redskins? Just 10.

The good news is that the front office used three of their six picks in 2010 on linemen. Sure, two of the three were seventh rounders who failed to make the 53-man roster, but progress is progress.

If Allen and Shanahan are going to turn this team around, then the priority this offseason needs to be getting younger across the board and aggressively seeking depth on the offensive line. Of course, the same could also be said about Washington’s defensive line, but we’ll save that for another day.