reed doughty is gunning for my job 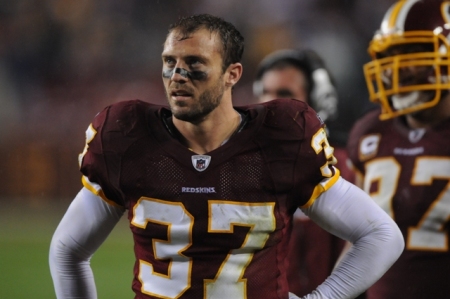 In case you missed it last week, there was an interesting development involving several players of the Washington Redskins.

Following tight end Chris Cooley’s wildly popular site, The Cooley Zone, as a blueprint, a brand-new company is hoping to provide fans access to professional athletes like never before.

According to their press release, SportsBUZZ is a new athlete-driven social media program that enables fans to get closer than ever before to their favorite athletes and teams. At the same time, it provides a unique platform for professional athletes to build their brand, grow their fan base, and monetize their popularity.

The exclusive SportsBUZZ online community, coupled with cutting-edge mobile applications, allows athletes and fans to interact directly with each other via video, audio, photo or text in ways never previously possible with traditional social media programs. With over 125 NFL athletes currently in its online community, SportBUZZ is a licensed partner of NFL Players.

I had a chance to catch up with Doughty at the SportsBUZZ launch party last week to find out exactly what the site is about and why Redskins fans should get with the program.

“SportsBUZZ is an interactive sports website that gives Redskins fans and NFL fans across the country an in-depth look at players,” he said. “It’s completely unfiltered. It’s exclusive. And it’ll have everything from my fly-fishing trip to what I like to eat before a game to what music I listen to the charity work I do. It’s not just some run-of-the-mill site about football.”

For a sports fan it sounds great, but my question is – what appealed to you? Why would you get involved in something like this?

“You know, there’s Facebook, there’s Twitter and there’s all of that stuff,” Doughty said. “But somebody will add you as a friend on Facebook and you never talk to them. With this, I’ll have fan mail that I’ll be able to answer on a regular basis. I’ll put buzzes on there regularly, which are like tweets, about what I’m doing.

“The cool thing for me is really the unlimited and unscripted amount of content with our teammates,” he continued. “I was doing pottery with Cooley at his house the other day. Me and Chris doing pottery? You’re not going to find anything like that anywhere else.”

You mentioned Cooley, who obviously has a personality tailor-made for this kind of website. I’m curious though, do you think all of these other players will be as into it as him and will you all be able to keep up with it the way he has over the years?

“I’m not looking at it as something I have to keep up with,” Doughty said. “I’m just trying to be myself. That’s what SportsBUZZ is – every player is different. We’re not just NFL athletes. We all have different interests. You’ll see guys who are interested in hunting on there. You’ll see guys into NASCAR. You’ve got guys into clothing or cars. I saw someone on there showing their new car, so I think I’m going to have to show off my Honda. I think it’s an LX, so it’s pretty fancy. It’s kind of a big deal.”

Okay, I hear what you’re saying and see where you’re coming from, but do you feel bad at all that you’re trying to make me obsolete? I mean, you’re going straight to the fans, so if this thing takes off, I might as well go back to my mom’s basement.

(Laughs). “No, I feel like it’s such different content than what you guys are blogging,” Doughty said. “Usually you guys are focusing on injuries and what happened on the field. I’m not necessarily going to talk about that kind of stuff. Fans are still interested in that, but that’s not what I’m focusing on. I’m going to try to give them stuff that can’t get anywhere else about myself and my teammates.”

One of the things I’ve always strived to do is put a face on the player wearing the uniform of the team people around here are already conditioned to cheer for. It sounds like you guys are attempting to do the same thing by helping fans get to know the players a little bit better …

“Absolutely,” he said. “We want people to see that we work hard, we practice hard and we study film, but we also do other things besides just being a player on the Redskins. This is for people who want to see what I do on my off day or what I’m interested in. this will show fans who we are and what we’re all about. We do have families, and we do take care of them. What movies we see. All of that kind of stuff.”

After talking with Doughty I had a better idea of what SportsBUZZ was about, but I wanted to catch up with Cooley. He found me and the two of us chatted for a while. I was honest with him and told him while I thought that something like this is perfect for someone as accessible as him, I wasn’t sure how many guys would stick with it after the shiny new toy feeling wore off a bit.

First and foremost, Cooley told me that like the rest of the players involved, he’s simply a client. This isn’t Cooley trying to take over the world or anything. It’s a concept he obviously embraces and it’s something he enjoys doing.

Cooley told me that the people behind SportsBUZZ are constantly getting with the players to record video updates, so he didn’t think it would be a case of a guy going months without posting anything new.

If that’s the case, then this could definitely grow into a site that ‘Skins fans turn to regularly – especially during the offseason when locals are especially starved for anything and everything pertaining to the burgundy and gold.