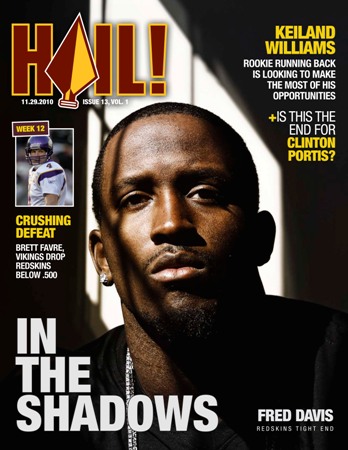 [As you can see, the 13th issue of Hail! magazine, our free digital publication dedicated to the burgundy and gold is now out. Here is a sneak peak of my feature story in this week’s issue on Redskins tight end Fred Davis as he opens up about the scandals at USC, what went wrong with the Redskins his first two seasons in Washington and his relationship with Chris Cooley.]

Maybe it’s because he grew up in a small-town community in Toledo, Ohio, but Washington Redskins tight end Fred Davis is easily one of the most level-headed and grounded professional athletes you’ll ever find.

When times are good, he’s not going to thump his chest and tell the sea of cameras how great he is. And when times are tough, he’s not the type of player to point fingers and make excuses. That’s just not who Davis is or what he’s about.

Maybe it’s because as a kid, if he and his friends found a way to get into trouble, his parents already knew about it by the time he got home.

“Everybody knew everybody,” Davis said. “So if we got together and did stupid stuff, like toilet papering someone’s car or a prank like that, word always got back. We would do harmless stuff like that. It was cool though. We had as much fun as you could in Ohio.”

It goes without saying that when parents are able to keep such close tabs on their kids, they’re far more likely to stay out of trouble. So when Davis was looking for extracurricular activities, he turned to sports.

Davis first stepped onto a football field when he was in the sixth grade and instantly fell in love. He had already tried soccer, basketball and baseball, but as soon as he started playing football, he was hooked.

“I think it was the physical contact,” he said. “You got to hit people and not get in trouble, so I enjoyed taking my aggression out on the field. And that’s part of it, but football’s not always about being physical. A lot of the times it’s about whose got the biggest heart. Especially when you’re younger and a lot of the players are at the same skill level. The difference in those games comes down to heart. I wasn’t thinking about playing in the NFL or anything. I was just having fun.”

As fate would have it, the first youth team Davis ever played on was called the Redskins. But while it was clear from an early age that Davis was a standout with a football in his hands, he still didn’t think much about playing professionally.

“I didn’t know if I’d be in the NFL, but I knew there was a good chance I could play for any school I wanted to,” Davis said. “In high school I knew I was pretty good, but it all kind of took off from there.”

In his first high school game, Davis caught two touchdown passes and returned a punt for another score. By the time his high school career was over, he’d been recruited by every big-name program in the country.

“I went with USC because it was far from home,” he said. “I didn’t want to be too close to home, they always had nice weather out there and their team was pretty competitive. Even away from football, it seemed like a fun place to be. Plus, you’re living in a big city, but you’re also still in a college atmosphere, so you kind of got used to both.

“I think it really helped me going to a big-city school because you see some guys, by the time they get to the league and get a bunch of money, they don’t know how to handle it. Going to USC, I didn’t have any money, but I learned how to deal with being away from home and living in a big city. By the time I got to the NFL and had some money, I feel like I knew how to handle myself better.”

On the field, USC was dominant. The Trojans went 46-5 during Davis’ career, but that record is marred because of the two-year bowl ban, four years of probation, loss of scholarships and forfeit of the 2004 season because of the scandal involving running back Reggie Bush.

To this day, no one knows for sure exactly what went on and who else violated NCAA rules by accepting handouts or money under the table. Like everyone else, Davis has heard the rumors.

“Nothing would surprise me,” he admitted. “UCLA is in Hollywood and USC is in the hood. And really, that kind of stuff has always been going on no matter where you’re talking about. There’s always going to be people out there trying to get you to sacrifice your college career for a few bucks.

“You’ve just got to learn how to deal with it and tell yourself you’re going to be in the league soon enough,” Davis continued. “Is it really worth it? Do you really want to owe this guy something or sell yourself short? There’s always going to be people like that – especially when you’re a top player at a big school. You’re definitely going to get that kind of attention. You’ve just got to be smart about it.”

Even though he came from a small town, Davis heard enough horror stories about athletes making poor decisions away from the game to avoid those types of situations. On the field, however, Davis continued to make a name for himself, earning the John Mackey Award as college football’s most outstanding tight end in 2007.

The following year, Davis was drafted in the second round (48th overall) by the Redskins.

“I was definitely surprised,” he said. “I didn’t know much about them, but they already had a good tight end in Chris Cooley. I knew they had a great history and that they had won multiple Super Bowls back in the day, but that’s about it. I didn’t even talk to them or work out for them.”

Typically, award-winning players end up on a team in need of an upgrade at that particular position. In Washington, Davis found himself behind a Pro Bowl tight end who also happened to be his team’s most popular player. Not exactly a dream scenario for a new guy hoping to make a strong first impression.

“I mean, it does get frustrating sometimes, but you’ve got to think about it and be thankful you’re in the league,” Davis said. “In the NFL, it’s all about opportunity. I get people asking me, ‘Why aren’t you performing better?’ But how do you expect me to show my best and show my abilities when I’m not getting an opportunity?

“He’s the guy getting paid the big money,” he continued. “He’s the guy who has made a name for himself as a Redskin. That’s just the way it goes. I’m not going to sit around and cry about it. I’ve just got to do what I can to be ready so when I get a chance, I make the most of it. I’m either going to do it here, or eventually I’ll end up on another team that needs me more. I’ve just got to continue to prove to everyone that I can do it.”