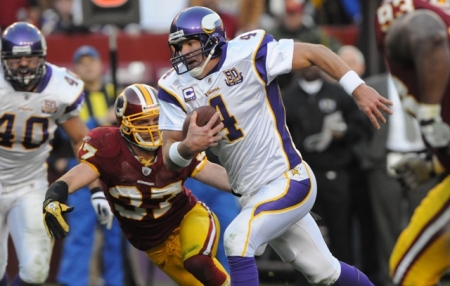 It’s one thing to watch your favorite team get crushed on primetime television against a divisional opponent. It’s quite another to witness them lose to a dysfunctional 3-7 team that can barely stop in-fighting long enough to focus on an opponent.

And for that reason alone, the Washington Redskins’ 17-13 loss at home to the Minnesota Vikings hurts the most. When the Redskins get outmatched from the very first play against Philadelphia, you can chalk it up to “one of those days.”

When the Vikings show up to town with an under-the-weather 41-year-old quarterback who leads the league in interceptions thrown and an interim head coach making his debut, it goes to show just how far the Redskins have to go before they truly are anything more than average.

Coupled with humbling losses to the St. Louis Rams (5-6) and Detroit Lions (2-9), the Vikings loss proves once and for all that – regardless of what head coach Mike Shanahan said in his introductory press conference – this is a rebuilding year for Washington.

“It’s frustrating because this is the third bad team we’ve lost to,” said tight end Fred Davis. “It’s one of those games where we should have won it.”

That “win now” mentality might work when you’re selling tickets, but it’s not working with the group that is currently in place. The Redskins desperately need to stop trying to slap a band-aid on their systemic problem and admit that they’ve been doing it wrong for more than a decade.

Cutting receiver Joey Galloway is a start, but now’s the time to throw everyone under the age of 25 out there on the football field to see who can play and who needs to go. The competitive portion of the 2010 season is over. So throw everyone from Terrence Austin to Will Montgomery to Kevin Barnes into the fire and see what they’re made of.

What’s the worst that can happen? You lose more games. So what. That’s been going on for more than a decade. At least this way ‘Skins fans can take solace in the fact that brighter days might eventually be on the horizon.

The day started about as perfectly as possible. The Redskins won the coin toss and promptly marched down the field with ease. An offense that has consistently struggled to score touchdowns suddenly looked to have figured it out, with quarterback Donovan McNabb completing all eight of his attempts for 84 yards.

The drive ended with Davis finally scoring his first touchdown of the season and, coupled with three catches for 32 yards by Chris Cooley on the drive, it appeared McNabb had finally figured out that he’s got possibly the best tight end combo in football waiting to be utilized.

Sadly, that was it for the Redskins offense.

They never found the red zone again and McNabb completed just 13 for 27 passes for 127 yards the rest of the game. As if that wasn’t bad enough, Washington’s leading rusher – rookie James Davis – finished with 11 yards on the ground.

What happened, you ask? It’s simple – the Redskins offensive line was completely overmatched. McNabb was sacked four times on the day, and pressured countless other times. When he did get rid of the ball before the next inevitable hit, his receivers too often dropped the ball.

It’s no secret that the key to beating Minnesota involves pressuring Favre into making boneheaded decisions and capitalizing on those mistakes.

Prior to Sunday, Favre had thrown a league-high 17 interceptions and fumbled the ball three times. Quick math says that’s 20 turnovers in 10 games. In related news, the Vikings were 3-7.

The easiest way to lose to Minnesota would be to let running back Adrian Peterson – who rushed for more than 3,000 yards and 28 touchdowns from 2008-09 – get off to a fast start and watch as he embarrasses your defense.

Well, Peterson lasted just six carries before leaving the game with an ankle injury, and yet, the Redskins still couldn’t take advantage. Instead, a rookie named Toby Gerhart (who had never rushed for more than 24 yards in a game) took over and finished the day with 22 carries for 76 yards and his first-career touchdown.

There’s no easy way to put this – if you can’t find a way to beat the Vikings without Peterson, then you’ve got a long way to go to respectability.

Watching 41-year-old Favre “scramble” 10 yards on 3rd-and-8 to seal the game only reinforced how far the Redskins defense has fallen. Maybe things will get better once defensive coordinator Jim Haslett has a chance to get players better suited to play his 3-4 defense. But right now, they really are as bad as the stats say they are.

They took away the deep ball and didn’t really give up much in the way of big plays. But they couldn’t create turnovers and couldn’t get off the field when it mattered most. Instead, they watched helplessly as Favre dinked and dunked his way down the field and Gerhart picked up three or four yards a carry.

For the defense – and especially for Redskins fans – it was a slow and painful death.

“It’s always disappointing when you can’t get off the field down the stretch,” said defensive lineman Phillip Daniels. “You want to go out there and give your offense a chance to go down the field but we didn’t get it done.”

4. “All Or Nothing” by Theory Of A Deadman

Even though the offense was nonexistent and the defense couldn’t make a stop, the Redskins still almost found a way to win the game. In fact, they would have been victorious if not for rookie linebacker Perry Riley, who before yesterday was known simply as “the other 2010 draft pick who hasn’t been cut” along with offensive lineman Trent Williams.

Well, everyone knows Riley now after he felt compelled to block a Viking in the back negating a 77-yard punt return for a touchdown by returner Brandon Banks. It was Riley’s second infraction of the game and was completely unnecessary.

It happened so far away from the play that had Riley done nothing and just stood around, the touchdown would have stood and the Redskins would still have an outside chance at the postseason.

“It was a return to the left side of the field,” Riley said. “I was trying to get position on my man. Banks did a good job setting the dude up. I thought I hit him on his shoulder rather than his back. Apparently I hit him in the back and the call was made. Of course I feel bad about it but it was all in good spirit. I was thinking positive on the play. It turned out bad on my part but it’s something I will fix. I feel terrible for the situation.”

Um … what? You were thinking positive on the play? I’m not sure how that’s supposed to make Redskins fans feel better right about now, but at least you felt good on that long car ride home.

Seriously, the Redskins lost because Favre – a guy two years older than Joey Galloway – outran them. I still can’t get over it.

“We had run the ball fairly effectively throughout the game,” Favre said. “I thought some of our bootlegs were effective.  Did I expect to run for a first down?  I haven’t expected to run for a first down for quite a while.  I really thought when I faked it, I had brought [Vikings receiver] Percy [Harvin] down in a short motion, I thought he would be wide open in a corner rout, and they actually covered it so I had to.  It was 10 yards?  It felt like 50.  We needed that win.  I think all wins are important, but sometimes what seems so insignificant for other people seems so big for the person or team involved.  That was the case today.”

That’s what the Redskins are here for – to help make other teams feel better about themselves.