getting to know victor ‘macho’ harris 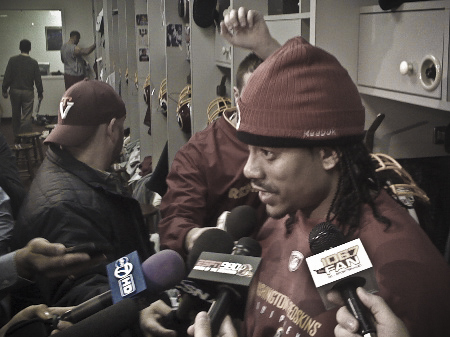 Lost in the shuffle of Vince Young’s epic meltdown was the fact that the Washington Redskins were dangerously close to running out of players in several key positions.

The national media may have focused in on the drama involving the Tennessee Titans and their quarterback, but the fact of the matter is, the Redskins were out of offensive linemen, running backs and safeties by the time the game was decided.

In the days since, the Redskins have made a handful of roster moves – including placing Clinton Portis on the injured reserve list and moving youngster James Davis onto the 53-man roster. The team also signed Jacob Bender, an offensive lineman from the UFL.

But the most intriguing move to me, and I fully admit I’m biased here, was the signing of safety Victor “Macho” Harris.

As a cornerback at Virginia Tech, Harris was a standout on one of the most defensive-minded college programs in the country. He always managed to find himself around the football and once he got his hands on the ball, he knew what to do with it – as evident by his 15 interceptions and four defensive touchdowns in three seasons.

Hall was someone who was legitimately excited just to have Harris join him in the NFC East after Philadelphia drafted Macho in the fifth round of the 2009 NFL draft. Needless to say, he’s thrilled to have his close friend joining him at Redskins Park.

“Heck yeah,” he said. “We went out to dinner last night. He came past the house after that. We looked at the playbook together a little bit. It’s going to be nice to have him out there with me.”

With that in mind, it was time to get to know Harris.

You’ve played cornerback and safety in the NFL. Obviously, with all of the injuries the Redskins are dealing with at safety that where they brought you in to play. How do you feel about that?

“Wherever I can help the team, so be it,” Harris said.

Normally when a guy arrives during the season, he’s got some time to get settled in. with the way things are here at the moment, you might have to dive right in this weekend. You ready for that?

“That’s part of the game,” he said. “A lot of guys get banged up and stuff like that. I’m here to help the team wherever they need me at. If they need me to be a kicker, I’m willing to do that.”

[Editor’s note: Dammit. Even Harris, who has been out of football completely, knows Graham Gano needs to be more consistent.]

How much of an adjustment do you think it’s going to be getting used to Washington’s scheme as opposed to what they ran in Philly?

“It’s going to be a little different – especially the terminology,” Harris said. “But as far as the scheme, it’s different, but not too far off. A lot of teams in the NFL do a lot of the same things, but I’d say the difficult part is going to be getting down the terminology right now.”

What went wrong in Philadelphia?

“I don’t know,” he said. “I really don’t. I can only look at it in a positive way. God had a plan for me. I can’t question that at all. I’m happy here, so everything happens for a reason. Now I’m here for a reason.”

In your opinion, what’s the biggest difference between playing cornerback and playing safety?

“At cornerback, it’s one-on-one with the receiver,” Harris said. “It’s basically your skill versus my skill. Being a free safety, you’re more like the quarterback of the defense. You have to call the plays and make sure everyone’s ready.”

Once the Eagles let you go, how tough was it to sit out and wait for your phone to ring again?

“It was hard,” he said. “Emotionally, I had to stay strong. My agent did a great job of keeping me active, going to teams for workouts and stuff like that. I just had to stay strong and continue to believe, you know. In times like that, some guys tend to fold their tents, but I felt like I’ve still got some more years in me in football.”

“Yeah, yeah, it was something to keep me in shape,” Harris said. “I hear that Steve Smith out in Carolina does it during the offseason, so I figured I could work on my technique, polish my game and do what I need to do to stay in this league.”

Honestly, I don’t care if Harris spent the last year doing nothing more than a paper route as long as he’s able to come in and fill the void.

With Chris “The Predator” Horton and Anderson Russell both done for the year, as well as LaRon Landry still sidelined because of an Achilles injury, the Redskins have a definite need in the secondary. If Harris comes in and shows the coaching staff he’s ready to see action, he could very well be involved as soon as this weekend.