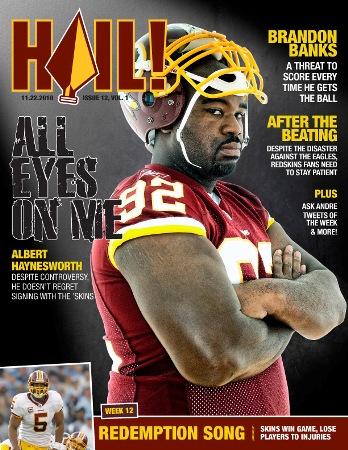 [As you can see, the 12th issue of Hail! magazine, our free digital publication dedicated to the burgundy and gold is now out. Here is a sneak peak of David Elfin’s feature story in this week’s issue on Redskins defensive lineman Albert Haynesworth.]

When Albert Haynesworth left Tennessee, where he had played his college ball as well as his first seven seasons as a pro, for a record, seven-year, $100-million contract with Washington nearly two years ago, the Redskins’ 2010 visit to the Titans was already set.

What Haynesworth didn’t know was how difficult life as a Redskin would be, starting with a 4-12 season under a coaching staff he didn’t like followed by a new group of bosses who wanted to move him out of his comfort zone and into the nose tackle position on a 3-4 defense.

And just as the two-time All-Pro was finding a middle ground with Washington’s coaches and settling into being a backup, his half-brother was killed in a motorcycle accident.

That’s a lot to handle, even for a 29-year-old with $41 million guaranteed.

“I think it will be a little weird,” Haynesworth said about returning to Nashville, where he starred for the Titans and where his children still live with their mother. “I practiced with them for seven years. Now it’s going to be a real game playing against the guys I grew kinda grew up in an NFL sense with. I think it will definitely be fun.”

Obviously, being a Redskin hasn’t been as fun as Haynesworth might have expected, but he said that he’s beginning to feel appreciated.

“[Last year] I felt like I was kind of like a showpiece to take up blocks and help the teammates … but as my teammates are playing good, I want to play good, too,” Haynesworth said. “I want to be able to get sacks and stuff. Last year … I felt I wasn’t doing what I could do. But now I’m getting back to it. It’s still a different role, but it’s more similar to what I did in Tennessee. … I don’t have to think as much on the field. I can just go out and play. … You see me standing up. You see me playing a lot of end. You see me doing a lot of things I did in Tennessee, so it’s helping a lot.”

Even though he’s missed three of Washington’s nine games, (one with a sprained ankle, one after his half-brother’s death and one for conditioning issues), Haynesworth has made enough plays that he leads the Redskins in tackles for losses (five), second in hurries (17) and tied for second in sacks (two).

Haynesworth’s best game as a Redskins came in the Week 7 victory at Chicago, during which he stuffed Bears quarterback Jay Cutler at the goal line, giving linebacker London Fletcher time to swoop in, strip the Bears’ quarterback of the football and recover the game-changing fumble. Haynesworth finished the game with a tackle for a loss, a sack and two hurries.

“We’re trying to put him in positions where he can be successful,” said Redskins defensive coordinator Jim Haslett, who admitted that, when it came to Haynesworth, the Redskins had been trying to fit square peg into a round hole in their base 3-4 defense. “We used him in nickel, goal line, short-yardage and some other things. Actually, he didn’t even know it, [but] he played five snaps of nose [tackle] against Detroit. He was awesome. He did a great job. I just sneak him in there once in a while and don’t tell him he’s a nose.”

Haynesworth’s teammates can see the difference in his attitude even if he doesn’t talk about it.

“You can tell when Albert’s not happy and when he is from his body language, how he walks around practice, whether he’s into it or not,” said linebacker Lorenzo Alexander. “Now they’re using him in the right way, the way he wants to be used, pass rush situations getting off the rock. And when he’s in on run downs, he can just go straight ahead and create some havoc. I think he’s very happy now. And the coaches are happy with what he’s doing.”

Of course, the moody Haynesworth, who spends his offseasons in Knoxville where he starred for the University of Tennessee, can’t help but wonder what life would be like if he hadn’t left the Titans or if the Redskins had worked out the trade to ship him back to his former teams as was being discussed when he was locked in a six-month battle of wills with head coach Mike Shanahan about his role.

“Sometimes I wish I was still back there because I felt like I could still be dominant,” Haynesworth said. “The fact of the matter is, Tennessee, they never pay defensive linemen, so I knew that wasn’t going to change. [So] I wanted to go somewhere else and be appreciated. I think people still think that I’m not playing as good as I can or whatever, but all of it ain’t about the player. Sometimes it’s the scheme, but … we’re getting back to it. They’re letting me play, so you’re seeing a lot more production out of me than you did last year and earlier this year.”