redskins should be thankful for mcnabb 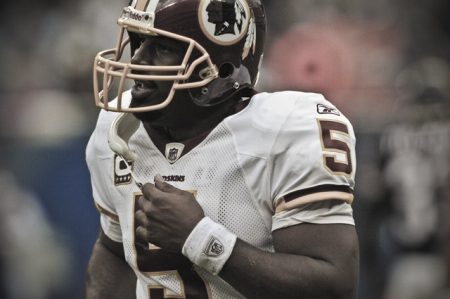 If ever there was a game that clearly illustrates why the Washington Redskins were willing to sign a soon-to-be 34-year-old Donovan McNabb to a five-year contract extension, it was the 19-16 overtime win over the Tennessee Titans.

Not because he completed 30 of 50 passes for 376 yards with one touchdown and one interception. Not because the Redskins’ offense, led by McNabb, converted eight of 16 third downs on the day and had the ball for more than 40 minutes. Not even because the 12-year veteran was able to overcome a lack of conditioning and football smart to put his team in a position to kick the game winner in overtime.

No, the Titans game is a perfect example of why the Redskins were willing to keep McNabb longer not so much because of anything he did, but rather, because of the actions of the opposing quarterback.

You might have heard that Titans quarterback Vince Young was pulled from the game in the second half after suffering a torn flexor tendon in his right thumb Sunday. The fifth-year pro apparently banged the thumb on his throwing hand on the helmet of Redskins defensive lineman Maake Kemoeatu and was affected by the play enough that his head coach thought it best to finish the game without him.

“If I thought Vince could go out and give us the best chance to win, then he would’ve gone back on the field,” said Tennessee coach Jeff Fisher after the game. “I was not going to put him on the field, knowing ahead of time he had an injury that would prohibit him from throwing accurately.”

Young, of course, was not thrilled to learn his day was over. And really, it’s hard to blame any competitor for wanting to go back into the game when the outcome is still very much up in the air. But instead of handling the situation properly, Young had a hissy fit. He had a temper tantrum. He took his ball and went home.

Young took his jersey and shoulder pads and threw them into the crowd as he stormed off the field. And then, while Fisher was attempting to address his team after the loss, Young continued to be a distraction – muttering obscenities under his breath but loud enough to cause another scene and ensure everyone nearby knew he was still disgruntled.

When Fisher tried to talk to him, Young opted to storm out of the locker room.

“Don’t walk out on your teammates,” Fisher said to Young.

And then, to the absolute surprise of no one, Tennessee announced 24 hours later that Young’s season is over. Sure, Fisher was kind enough to say that Young needs season-ending surgery on his thumb and that’s the reason why the 27-year-old is done, but you get the sense that after Sunday’s outburst this was really the only possible outcome.

And now the Titans are in the hands of someone allegedly named Rusty Smith, a baby-faced rookie out of Florida Atlantic. The sixth-round pick might very well turn out to be the next Tom Brady, who was also a sixth rounder, but he wasn’t up to the task against Washington.

In his first live action as a pro, Smith completed three of nine passes for 62 yards with one interception. Smith’s quarterback rating for the day was 19.0, which is fitting because he looks young enough to still be a teenager.

Now, I bring all of this up to remind Redskins fans just how fortunate we are to have McNabb in town. He’ll be the first to admit that he needs to perform better on the field than he did the first half of the 2010 season, but there’s no questioning how McNabb handles himself off of the field.

He’s a consummate professional. Bullies like Rush Limbaugh and Terrell Owens might walk up to him and try to start a fight, but McNabb’s never going to stoop to their level. Mike Shanahan might stand up in front of a sea of microphones and question his quarterback’s lack of conditioning and football smarts after a disappointing loss to lowly Detroit, but he’s not going to make a scene.