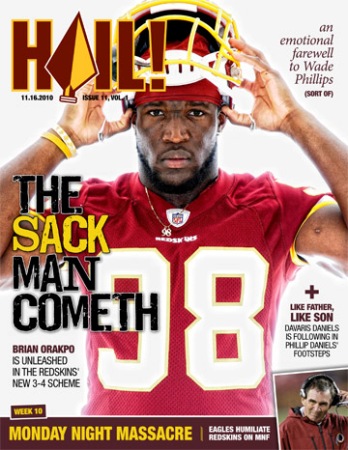 [As you can see, the 11th issue of Hail! magazine, our free digital publication dedicated to the burgundy and gold is now out. Here is a sneak peak of my feature story in this week’s issue on Redskins defensive lineman Phillip Daniels and his son, DaVaris, who is looking to follow in his father’s footsteps.]

You don’t last 15 seasons in the National Football League without learning a thing or two about life on and off a football field. That’s why defensive end Phillip Daniels is one of the most respected players in the Washington Redskins’ locker room.

Sure, he might be 37, but Daniels is still one of the strongest players on the Redskins and he’s also one of the team’s hardest workers. So when Daniels speaks, his teammates listen.

On the field, Daniels also commands respect as well. The 6-foot-6, 305-pounder had 615 tackles, 60 sacks, 16 forced fumbles and 12 fumble recoveries in 187 games played prior to this season.

Now, if you’re the son of an established NFL player such as Daniels and you dream of one day following in your father’s footsteps, you’d probably want to follow suit and pay attention to your old man as well, right? Apparently not.

DaVaris Daniels, a senior at Vernon Hills High School in Illinois, fully admits it took some time and some growing up before he was ready to listen to his father when it came to football.

“When you’re younger, you don’t always take criticism the right way,” he said. “He’d try to give me some feedback or advice after a game, but I didn’t want to hear what I’d done wrong. I only wanted to hear the positives from him. It took me a while to get out of that mindset, but once I did, it really helped me out.”

“He’s definitely been there and done it all,” DaVaris continued. “He’s taught me the ropes along the way and he’s always been willing to give me advice, but at the same time, he’s always left it in my hands to go out and do it.”

That was by design, says Daniels. While he went through the same process back in 1992 before opting to go with the Georgia Bulldogs, Daniels didn’t want to be one of those parents who tries to dictate to their children where they go and what they do with their lives.

“Ultimately, it’s his decision,” Daniels said. “He’s got to be the one making the decision. If he has questions, I’m more than happy to help, but as far as choosing what school he wants to go to, it’s up to him.

“I’ve got nothing to do with it,” Daniels continued. “I even told the University of Georgia, it’s all about how you recruit him and what school he falls in love with. It’s not up to me, it’s up to the coaches and everyone involved in the recruiting process. I’m just here to support him throughout the process.”

Even though Daniels stays in Virginia during the season and his family lives in Illinois, the father and son are in constant contact. Because of the demanding NFL schedule, Daniels was able to see just one of DaVaris’ games this season in person. For the rest of the games, Daniels has to settle for watching a feed on the internet.

“We talk a couple times a week though,” DaVaris said. “And no matter what we start the conversation talking about, it always gets to football at some point.”

At 6-foot-3 and 180 pounds, DaVaris isn’t built like a defensive lineman. Instead, the younger Daniels plays wide receiver well enough that he’s considered one of the top prospects heading into college.

When asked which professional football player he most resembles on the field, DaVaris says Indianapolis receiver Reggie Wayne, who is considered one of the best all-around wide outs in the game.

“But I don’t see it,” Daniels said. “I really don’t. It’s hard to pick a guy in the NFL right now because, really, he could be anybody. I’m not sure who I’d say he plays like, but I know he plays well.”

Regardless of whether he’s the second coming of Wayne or not, DaVaris has proven to be an impact player in whatever situation his coaches put him in. This season alone, he’s thrown, caught, rushed, returned a punt for a touchdown and even scored a defensive touchdown for the Cougars.