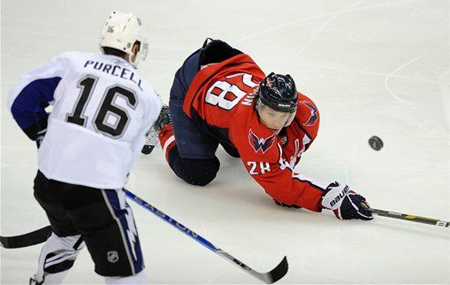 If the Washington Capitals were a football team instead of a hockey franchise, their regular season would be over.

After 16 games, the Caps proudly stand in first place in the NHL with a 12-4 record. To put that in perspective, the Redskins have won 10 games in a season only twice in the last 19 seasons, and you have to go all the way back to 1991 to find the last time the Redskins had at least 12 wins in a season.

So yeah, the Capitals are off to a pretty solid start. But that’s been the norm since Bruce Boudreau came to town, isn’t it? The Caps have won early and often since Gabby took over during the 2007-08 season – going 153-60-28 in the regular season.

After last night’s 6-3 win over the Tampa Bay Lightning, Washington is currently riding a six-game winning streak. But that’s nothing new for the Caps either.

Four different times last season the Capitals won at least five games in a row – including a franchise-best 14-game winning streak that saw Washington go undefeated for nearly an entire month of action. In all, this is the team’s ninth winning streak of five or more games under Boudreau.

Because most of our local sports franchises are mired in mediocrity, I’ve decided to go back and look at each of the team’s six consecutive wins to see how the Capitals have once again gotten off to such an impressive start.

Washington improved to a league-best 8-1 at home with a convincing victory over a much-improved Tampa Bay squad. Although the Lightning have been down for several years now (the last time they qualified for the postseason was 2006-07), if the season ended today, they’d not only make the playoffs – they’d host a first-round matchup.

Led by 20-year-old center Steven Stamkos, the Lightning are now considered one of the teams most likely to break out this season. In just 15 games played, Stamkos has 14 goals (tops in the NHL) and 12 assists (seventh best) for 26 points (tops in the NHL). So if the Capitals were going to best the Lightning, someone had to step up and out-produce Stamkos.

The Lightning outshot the Capitals 41 to 26, but it was Washington’s enigmatic forward Alexander Semin who was the difference maker – picking up three goals and two assists to single-handedly ensure victory for the home team. He broke open a close game with a hat trick in the third-period and seemingly had his way with Tampa goalie Dan Ellis in the final frame.

Center Nicklas Backstrom finished the game with four assists and forward Alex Ovechkin finished with a goal and two assist. The win gave Caps rookie goalie Michal Neuvirth his 10th win of the season – which is also a league best.

While the Caps and Rangers often find themselves locked in close games, Washington typically finds a way to pick up the two points. In fact, Washington is 9-1-1 in its last 11 against New York and 4-0-1 at Madison Square Garden over the last three seasons.

The Caps’ top line was held in check against the Rangers, so gritty role players such as Mike Knuble, Brooks Laich, John Erskine and Matt Hendricks provided the offense for Washington. And while it’s nice to have the luxury of elite players like Ovechkin, Backstrom and Semin, any hopes of postseason success hinges on blue-collar workers who comprise the bottom half of the roster.

While Hendricks got the game winner and Erskine scored just his eighth goal in 338 contests, the goal of the night went to Knuble, who was so snakebitten this season that he joked it might be time to sacrifice a goat. Thankfully, it didn’t come to that.

While the Capitals are the top team in the Eastern Conference, Philadelphia currently resides in second place – two points back. The Flyers are third in the league in goals per game (3.3), fifth in goals against (2.2) and already boast six p[layers with at least 10 points this season.

But the Caps were able to eke out the victory thanks in large part to rookie goalie Braden Holtby, making his first career start. Holtby, who reminds me of former Flyers goalie Ron Hextall in net, bested Flyers rookie Sergei Bobrovsky by stopping 23 of 25 shots.

The other deciding factor for Washington was special teams. The Caps stopped both of Philadelphia’s powerplay opportunities on the night and managed to score twice on the man advantage – including defenseman Mike Green’s overtime winner.

Bruins goalie Tim Thomas was the league’s top goaltender and Neuvirth earned rookie of the month honors in October. And yet, both watched the final moments of the game from the bench – having been pulled earlier in the contest.

The Caps managed to blow a three-goal lead by allowing Boston to strike three times in a seven-minute span in the third period, but Holtby came in and helped settle the Caps down in their own zone.

“I didn’t know if it was fair to Braden to put him in his first game, 10 minutes to go against Boston in a tie, but he did outstanding,” Boudreau said.

Also noteworthy, the Capitals got goals from three different defensemen – Green, Tyler Sloan and John Carlson. Thomas, by the way, came in the game a perfect 7-0 with a breath-taking 0.72 goals-against average before the Capitals sent him to the showers.

Toronto might be the first team listed here that wouldn’t qualify for the postseason, but they definitely found a way to stay competitive against Washington. Looking nothing like a team that came into the game having dropped seven of eight, the Maple Leafs rallied to score three straight goals after falling behind 3-1 to take a 4-3 lead in the third period.

The Caps tied the game late on a goal from Semin, who was questionable heading into the game because of an illness. Semin also scored the game clincher in the shootout to send the Verizon Center crowd home happy and give Neuvirth his first career shootout victory.

For the record, the Capitals are now 6-0 this season when Semin scores a goal.

After 20 minutes of action, Calgary led the Capitals 2-1. Unfortunately for the Flames, there was still plenty of hockey left to be played. Washington struck six times in the second period and cruised to a convincing 7-2 win on the road.

Washington picked a good time to get hot – especially considering the Caps had scored just 10 goals in their previous five games – and six different players scored against Calgary. The Capitals actually scored those six goals on just 14 shots in the second period and the team’s powerplay unit converted three of four chances on the night.

Neuvirth stopped 27 of 29 shots and the Caps’ penalty kill unit was successful all six times the Flames had a man advantage.