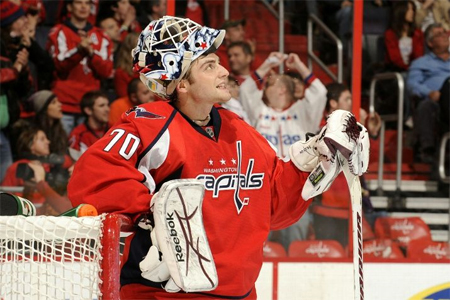 For the next five months, the Washington Capitals are practically in a no-win situation.

That’s what happens when you spend an entire regular season re-writing the record books, only to self destruct as soon as the playoffs start.

It’s as if a good chunk of the fanbase, as well as the national media, refuse to be satisfied until Washington proves once and for all that Bruce Boudreau’s high-octane brand of hockey can translate into playoff success.

Capitals players can’t really do anything to improve their standing in the public’s eye, but they can still damage their reputation. If forward Alexander Semin storms out of the gate – scoring nine goals in the team’s first 14 games – there are still folks out there who will shrug their shoulders and say, “But can he do it in the postseason?”

Fair or unfair, that’s where we’re at. Defenseman Mike Green blasts an overtime winner against the Philadelphia Flyers to give the Capitals a 3-2 win Sunday (giving Green nine points in 11 games this season), but critics still rush to pick apart his game.

Even though the win was Washington’s fourth in a row and catapulted the Caps into first place in the Eastern Conference for the first time this season, no one seems in a hurry to pat the team on the back. And that’s okay. Even those involved understand there’s a lot of hockey left to be played.

It’s smart for Boudreau to downplay the 14th game out of 82 and, like I said earlier, there are plenty of fans who now expect the Capitals to cruise to victory on a nightly basis. But that doesn’t mean I can’t stop and acknowledge a few things that have caught my attention during the first quarter of the season.

For starters, everyone knows the Capitals can score goals. They’ve scored 47 goals in 14 games, which is good enough for 3.3 goals a game (second best in the NHL). But the good news is that the Caps have improved dramatically on defense – allowing just 2.4 goals a game (eighth best in the league).

And while the powerplay unit is converting at a 20-percent success rate (10th in the NHL), the penalty kill – which has plagued the Capitals for years – is actually rated higher. At 86.7, the Caps currently have the seventh-best penalty kill unit in hockey. If the Capitals can keep both the powerplay and penalty kill ranked in the top 10 this season, then teams are going to have to think twice before getting physical with Washington.

Enforcer D.J. King was a nice addition, but a successful powerplay and penalty kill unit will go a lot further than any tough guy in tilting the ice in favor of the Caps. The fact that the team has been able to find this level of success while defenders such as Green and Tom Poti have been in and out of the lineup is impressive.

Growing pains are to be expected for youngsters such as John Carlson and Karl Alzner, but they’re showing themselves ready for the pressure on most nights. And while I’ve never been a huge fan of either Tyler Sloan or John Erskine, they’ve both done well stepping up while other defensemen have battled injuries.

On offense, the Capitals are still waiting for guys like Brooks Laich and Mike Knuble to get into any sort of a rhythm. Knuble is so snake bitten at the moment that he can’t seem to buy a goal. It’s as if he’s shooting on net with defenseman Jeff Schultz’s stick.

But anyone who knows hockey knows that every shooter goes through hot and cold streaks. And with a savvy veteran like Knuble, it’s a safe bet that sooner rather than later he’ll snap out of it and start banging home rebounds once again.

In the meantime, forward Eric Fehr is picking up the slack on offense. To me, it’s been downright enjoyable watching the continued evolution of a player like Fehr. He may never completely live up to his lofty draft status (he was the 18th overall player selected in 2003), but Fehr is a bona fide hockey player.

He has no issue doing the thankless jobs, like fighting in the corners for a loose puck or back checking when a defenseman jumps up in the play, giving Boudreau someone he can definitely count on when the game is on the line.

But the biggest storyline of the season thus far is the goaltending situation. There are still many folks out there who are convinced the Caps will make a splashy trade before the season is over to acquire a veteran goaltender for the playoffs. But rookie Michal Neuvirth has been as good anyone could have reasonably hoped so far – even earning NHL rookie of the month for October.

Semyon Varlamov might ultimately prove too fragile to count on, but Neuvirth has been solid as a rock. And in the last two games, fellow rookie Braden Holtby has also shown he’s ready for an increased role, should the Capitals need to call on him.

Can Neuvirth and Holtby remain steady all season long? We’re a long way from knowing the answer to that question. But the longer they look the part, the less likely general manager George McPhee is going to replicate last season’s trade deadline – where boredom apparently set in and GMGM decided to start making moves just to make moves.

And nothing against Joe Corvo, but that’s something Caps fans would happily avoid the second time around.