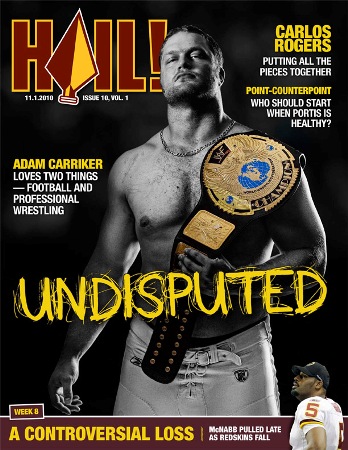 [As you can see, the 10th issue of Hail! magazine, our free digital publication dedicated to the burgundy and gold is now out. Here is a sneak peak of the main feature in this week’s issue — my feature story on Redskins defensive lineman Adam Carriker, and his love for football and professional wrestling.]

After a rocky start to his football career and a series of underwhelming win-loss records, Adam Carriker has one goal from here on out in the NFL – winning football games.

The Washington Redskins defensive end was born in Nebraska, where Cornhusker football is considered must-see television. At an early age, Carriker was drawn to the game and knew he wanted to play football, but first he had to convince his father.

“He didn’t want me to play because he said too many guys get hurt playing football,” Carriker said.

So Carriker settled for playing baseball and basketball until the seventh grade, when he finally convinced his father to let him play football. But after playing in just one game, football felt so foreign to Carriker that he was ready to give it up. Because it was so different from the other sports he had played up to that point, he had trouble finding his comfort level.

That Friday, Carriker sat down with his football coach and let him know he didn’t want to play anymore. He had made his decision and was ready to move on … until the following day when it was time, once again, for Nebraska football.

Watching his beloved Cornhuskers play again, he remembered what had drawn him to the game in the first place. With a renewed faith, Carriker sought out his coach and rejoined the team that Monday.

“I never even missed a practice,” Carriker said with a laugh. “I don’t think anyone associated with the team, other than the coach, even knew I had quit.”

Carriker became a standout player, drawing interest from a handful of big-name colleges. The only problem was Kennewick High School, in Kennewick, Wash., won a grand total of two games during his four-year career, so he wasn’t on the radar of the one college program he always dreamed of playing for: Nebraska.

Fortunately for Carriker, his high school coach knew how much the Cornhuskers meant to him, so he took it upon himself to contact the school.

Initially, recruiters told Carriker he wasn’t good enough for a scholarship. But their tune changed as soon as they saw his highlights – including a 17-tackle performance in his final high school game. Although Carriker wasn’t exactly thrilled with the lukewarm reception he was getting from Nebraska, he reluctantly agreed to visit their campus in Lincoln.

“During that recruiting trip, I saw everything I remembered from watching all those Nebraska football games growing up,” he said. “My dad was with me and I said to him, ‘Forget everything that’s happened. This is where I want to go.’”

Carriker’s collegiate career didn’t exactly get off to a picture-perfect start. He was redshirted his first year at Nebraska, meaning he was relegated to the scout team during practices and he didn’t get to play in any games. Making matter worse, the Cornhuskers went just 7-7 – which is a disaster for a powerhouse program like Nebraska.

“It was the first time in something like four or five decades that the program didn’t win at least nine games,” he said. “So the players and coaches weren’t exactly in a great mood during that time either.”

Carriker continued to work hard and by his junior year, people were starting to take notice of exactly what he was capable of on the field.

“I had four sacks in my first four games my junior year,” Carriker said. “That’s when people started coming up to me on campus asking me if I was leaving early. I didn’t even know what they meant at first. I hadn’t even really thought of the NFL at that point.”

Carriker returned to Nebraska for his senior year and he continued to impress. He played so well, in fact, that he was selected with the 13th overall pick in the 2007 NFL draft by the St. Louis Rams.

When he made it to the NFL though, he once again found himself dealing with a losing record. During his first two seasons in St. Louis, the Rams went just 5-27. As if that wasn’t bad enough, Carriker missed the entire ’09 season because of a shoulder injury.

This past offseason, Carriker was shipped to the Redskins for a pair of late-round draft picks. He chalks the decision to ship him off on nothing more than bad luck.