honeymoon is over for shanahan 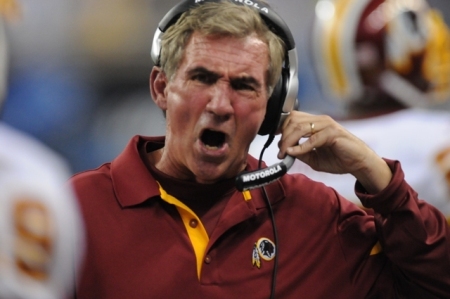 I know you’ve been here for a little while now, but after your questionable decision making skills were on display this past weekend in Detroit it’s clear that whatever grace period you were given by this football-loving town upon arrival has been used up.

I’m sure it brought a smile to your face when the Washington Redskins trotted you out and spoke about restoring hope and tradition with a proven winner. Not to take anything away from your impressive resume, but that’s what happens when you replace a guy who wasn’t qualified to be an offensive coordinator – let alone a head coach. Anyone other than Jim Zorn was going to be overwhelmingly embraced.

Regardless of what some may say, ‘Skins fans knew the franchise wasn’t going to be overhauled overnight. There were too many holes. Too many aging veterans. Not enough depth. So rational Redskins fans knew there was going to be a bump in the road or two before this team was realistically ready to compete with the big boys.

But, just like that, all of that goodwill is gone in a flash. You’re finding out firsthand that as quickly as D.C. fell in love with you, the infatuation can end just as fast. The mushy phase is long gone and what you’re left with now is a fractured relationship. If you’re going to make this work, then you’re going to have to improve your communication skills.

You see, this backlash you’re feeling right now isn’t about your decision to bench quarterback Donovan McNabb with less than two minutes remaining in a winnable game against the Detroit Lions. Folks around here (myself included) might think you’re insane for willingly allowing Rex Grossman into a game, but that’s your call.

In that moment you did what you thought was best for your football team, and while we might not agree with it, Redskins fans would have eventually let it go had you handled the situation properly. But, as we know by now, that’s not what happened. Nope. You walked up to that podium for your post-game press conference after losing 37-25 to the Lions and you said the following:

“At the end of the game with Donovan, with a minute left and Rex knowing how to run that two-minute offense, I felt with the time and no timeouts he gave us the best chance to win in that scenario,” Shanahan said. “Just knowing the terminology of what we’ve done, how we’ve run it, it puts a lot of pressure on a quarterback that hasn’t been used to that terminology.”

Just to be sure there wasn’t any doubt where you stood on the issue, you followed that up with:

“What you have to do sometimes is you understand everything is sped up,” Shanahan said. “When you don’t have timeouts, it’s got to come automatic. You’ve got to call a couple plays at the line, a few plays at the line. When you go through this during the week [in practice], and you take a look at this type of atmosphere [during a game], I thought it was the best scenario to put him in there in that situation.”

And that was it. Before you even finished up your press conference and walked out of that room, an entire fanbase had turned on you. You’re a bright man who has dedicated his entire life to professional football, so there’s no reason to beat around the bush. I’m going to come right out and tell you that people’s feelings are hurt because McNabb is easily the best quarterback this franchise has had in 20 years. That’s not even up for debate.

Even though he’ll be 34 this month and he’s far from perfect, he’s still a borderline Hall of Famer and he’s still a far superior quarterback than Grossman.

But eight games after you traded away multiple draft picks to acquire McNabb, you benched him. And compounding matters, you didn’t even have the common courtesy to lie to us about the situation. Instead, you threw McNabb under the bus by saying he still doesn’t have the offense down and then you followed that up by suggesting he’s not smart enough to handle a two-minute drill with the game on the line.

I think we can both agree that this will not be remembered as your finest moment. But here’s what I don’t get – even if that’s truly how you feel, why on earth would you vocalize your opinion? Why bring unnecessary controversy into your life if you can avoid it?

And you know better. That’s the killer here.

One week earlier, for reasons unbeknownst to Redskins fans, your coaching staff decided to barely utilize starting safety Kareem Moore against the Chicago Bears. Backup Reed Doughty started the game and Moore took the field about as often as I did during the first half in Chicago.

Regardless of what the actual reason was, you walked up to the podium and lied through your teeth.

“One of the reasons why he didn’t play as much is he’s still hurting,” Shanahan said. “The knee swells up and we wanted to give him a little rest. We can see in practice that he tries to go but can’t go full speed.

“We were afraid that if we played him too much, we might slow him down for an extended period of time,” Shanahan continued. “Playing him as much as we did, we felt like it would be a little bit better for him and our football team. He’s such a tough guy, you’ve gotta keep him outta there. I thought he was more effective playing in a limited role ’cause of his knee.”

Again, you made a gut instinct during a game and that’s fine. Regardless of what the real reason was for Moore, you kept everything “in house” and told a lie for the good of the team.

And yet, when given the chance to do the same thing one week later with your team’s biggest star, you dropped the ball. Instead of telling everyone that your offensive line had already gotten him sacked six times and you were concerned whether he’d make it out of the Lions game alive, you opted to question McNabb’s intelligence.

Of course, 24 hours later you tried a little spin control, but it was far too late. The damage had already been done.

“Earlier last week, I sat down with Donovan and talked to him about possibly sitting out this game after talking to our trainers,” Shanahan said. “I called Donovan in my office, I said, ‘Donovan, hey, the thing I want to make sure is that the second half of this season that you are ready to go. Are you sure you want to be able to play in this game?’ He said he felt like he wanted to play, he would be fine and he would not further injure the areas that would be hurting.”

Seriously, how tough was that? Had you stuck to that story before you left Ford Field, there’s a good chance that all of this would have blown over by now. Everyone would have still believed that you and McNabb were eventually going to lead the Redskins back to relevance and you could have turned your attention to preparing for the second half of the season rather than dedicating countless hours to squashing unnecessary drama.

It’s one thing to square off with Albert Haynesworth, who most people feel brought heat on himself for refusing to be a team player. But it’s an entirely different animal when you call out McNabb, who, might I remind you, is set to be a free agent after this season.

There’s still plenty of football left to play this season, which gives ample time for everyone to move past this. This current situation is far from perfect, but it’s not a deal breaker. If you can find a way to put your ego aside and make nice with McNabb, then there’s a chance he will still be willing to remain in town after this season, as opposed to sprinting as quickly as possible to Arizona or Minnesota.

With all due respect, you got us into this mess. Now, be a man, admit your mistake and do what’s necessary to get us all out of it.