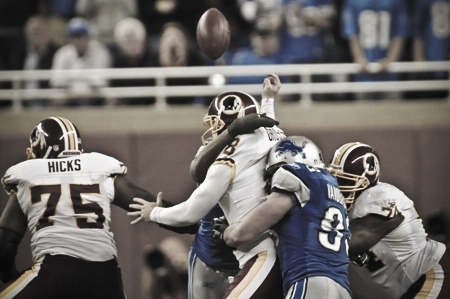 For the second consecutive year, the Washington Redskins traveled to Detroit and fell victim to the Lions in humiliating fashion.

And for my money, this year’s 37-25 drubbing was far worse than last season’s 19-14 loss. That’s because the Redskins are now led by head coach Mike Shanahan and quarterback Donovan McNabb, as opposed to nice guys Jim Zorn and Jason Campbell.

Sure, last season’s loss helped snap Detroit’s 19-game losing streak, but dammit, this is supposed to be a professionally run football team now. They’re not supposed to give away games to doormats like the Lions and St. Louis Rams anymore.

“Last year we really came into this game not to lose, didn’t want to be the first team to lose to them,” said linebacker London Fletcher. “That wasn’t our mindset this year. We’re here with a mindset to win a football game. This is more disappointing because we had an opportunity to go 5-3, to stay a game within our division lead.”

It was also more disappointing because everyone currently employed by the Redskins knew what happened in last year’s game. They had seen, heard or experienced first-hand Washington playing down to the level of their opponent once again and allowing a bad team to hang in there with them.

Eventually Detroit players realized that their opponent was willing to bumble away the game and they decided to see what winning was like. Fast forward to this season, and while the Lions still have more wins than losses, they also have much more talent on that roster. And the fact that they were victorious against the Redskins a year ago was also fresh on their minds.

So they showed up to play some football Sunday. Too bad the majority of the Redskins can’t say the same thing.

2. “When The Lights Go Out” by The Black Keys

Here’s what I don’t get – Shanahan is notorious for holding his cards close to his vest. Anyone who has tuned in since he came to town can verify that he rarely says much of anything in his press conferences and/or post-game media sessions.

If that’s the case, then why on earth would he openly volunteer that he benched McNabb with just under two minutes to play in the game? Think about it. Just one week ago, he stood in front of the media after the win over Chicago and said safety Kareem Moore didn’t play as much as usual because he was banged up and they were trying to keep him healthy through the bye week.

Was that actually the case? No one knows for sure, although I saw first hand just how pissed Moore was after the game. It’s hard to believe that if Moore actually thought the team was looking out for his best interests, he’d be that angry following a victory.

Either way, that was the story Shanahan opted to sell to the media one week ago. Now, everyone knows McNabb is not 100 percent. He’s dealing with a few nagging injuries and the reaction would have been drastically different had Shanahan stuck with the “protecting my injured player” story rather than divulging that he went with backup Rex Grossman over McNabb with the game on the line because he thought Sexy Rexy gave him the best chance to win.

Here’s the problem with benching McNabb – now you’re turning your offense over to Grossman. Forget what you heard last week in Chicago from disgruntled Bears fans – they were just lashing out because their franchise quarterback Jay Cutler had just thrown four interceptions to the same player in one half.

Oh by the way, he came into the game and promptly turned over the ball ensuring the Lions went home happy and the Redskins limped into the bye week. It’s as if he had been sitting around for 58 minutes of football and then was suddenly thrust into the action against an aggressive defense with little hope of mounting any sort of a comeback.

Here’s the other problem with benching McNabb – your offensive line, which was atrocious against the Lions, was allowed back into the game.

Is it McNabb’s fault that center Casey Rabach struggled to snap the ball without tripping up his quarterback? Is McNabb to blame because he was on fire all game long because his offensive line couldn’t slow – forget stopping anyone, they couldn’t slow down the Lion’s defensive line, which sacked McNabb six times and pressured him countless other times.

Tackle Jammal Brown is either unhealthy or no longer a dominant player. Take your pick. If he was still an all-pro talent, then we’d be done with Stephon Heyer, who is still terrible. Rookie Trent Williams is going to be a fine offensive lineman, but he’d be the first to tell you that he struggled mightily in Detroit.

For whatever reason, the coaching staff hates Derrick Dockery, so we’re left watching Kory Lichtensteiger. You should know his name well by now because he’s regularly spun around backwards as defenders blow by him, giving fans a chance to memorize the spelling of his name. He’s not any good, but he’s apparently more athletic than Dockery, which is good to know as he’s getting bull-rushed.

And, just for kicks, Artis Hicks is reminding people why he was a backup a year ago in Minnesota. He also likes to mix in a poorly timed penalty for giggles on occasion. But none of those guys need be held accountable. Clearly this game was lost by McNabb. Clearly.

The Lions have been pretty bad for a while, but they’ve finally been able to use those high draft picks on some very talented individuals. We’ll start with defensive lineman Ndamukong Suh, who was a beast in college and continues to play at a very high level in the pros.

There’s a chance he actually spent more time in the Redskins backfield than McNabb Sunday because, unlike McNabb, Suh didn’t get benched. He also scored a touchdown, which makes him a more effective offensive weapon than Redskins receiver Joey Galloway, but that’s not saying much.

The Lions also have Pro Bowl receiver Calvin Johnson and franchise quarterback Matthew Stafford, and the duo hooked up for three touchdowns on the day. I hope it’s a long, long time before I have to attend another game involving the Redskins and Lions, but with talented first rounders like these guys, Detroit might actually be capable of beating someone other than Washington in the very near future.

Brandon Banks is good. Brandon Banks is fast. Brandon Banks is the only player who should feel good about his effort in Detroit. When Banks had a return for a touchdown called back early in the game because of a block in the back by safety Reed Doughty, I figured the Lions would be wise enough to kick the ball away from Banks the rest of the game.

Banks returned a kickoff 96 yards for a touchdown to give the Redskins a 25-20 lead with eight minutes remaining in the game. Sure, they couldn’t hold onto the win, but it wasn’t because of Banks, who finished the game with a team-record 271 return yards.

Can you believe the Redskins actually cut this guy?

Sure, he had some problems holding onto the ball in the preseason, but the 22-year-old is easily the most explosive player the Redskins have had in a long, long time. As long as he holds onto the ball, he’s got a chance to score a touchdown (which, again, cannot be said of Galloway).

I hope ‘Skins fans enjoyed Banks’ efforts on Sunday because it’s only a matter of time before teams stop kicking to him all together.