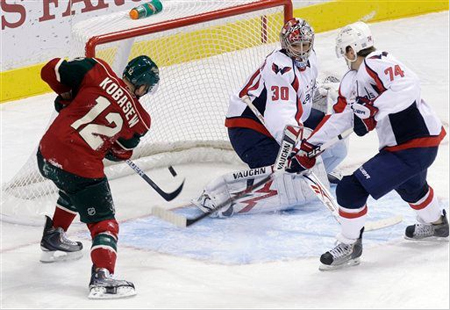 That the Washington Capitals lost 2-1 on the road against the Minnesota Wild shouldn’t come as a surprise. After all, Washington has failed to defeat the Wild in six games at the Xcel Energy Center.

The troubling aspect of the loss though, is in the details.

Well, this loss falls in the latter category as the Caps looked flat for much of the night, leaving coach Bruce Boudreau very few positives to walk away with.

“I can’t think of seven guys [who played well] off the top of my head right now,” Boudreau said following the loss. “It was really a disappointing effort, I thought, from our team for 50 minutes. You can’t play 10 minutes in this league and hope to win a game. I thought it was very disappointing.”

Capitals goalie Michal Neuvirth, who has easily been the best Capitals player this season, picked up his first career shutout in a 3-0 victory over the Carolina Hurricanes Wednesday night. Just 24 hours later, Neuvirth was stellar again – unfortunately, he was the lone bright spot for Washington against the Wild.

When the first period was over, the Caps had just four shots on net and trailed 1-0 on the scoreboard, thanks to a goal by Minnesota forward Chuck Kobesaw. This too is nothing new for the Caps, who have surrendered the first goal in seven of 10 games this season.

The Wild took a 2-0 lead late in the second period on a powerplay goal by center Mikko Koivu, and there was little reason to believe the Capitals were going to keep things competitive. After the first two periods of action, the only Washington forwards to register a shot on goal were Alex Ovechkin, Nicklas Backstrom and Mike Knuble.

In case you forgot, those three players comprise the team’s top line. Everyone else apparently remained in Carolina.

And that’s the problem for Washington through 10 games this season. Too often, it appears as if some players are content to just coast around the rink without contributing much of anything. How does a line of Alexander Semin, Brooks Laich and Mathieu Perreault fail to even get a single shot on goal through 40 minutes of gametime?

Even after it was all said and done, those three tallied no points, two hits and just two shots on goal. It should go without saying that it’s tough to win in the NHL when your second line is so badly outworked.

And let’s not forget that the Caps have also had a knack for untimely penalties. There was a sequence last night when defenseman Tyler Sloan was attempting to reel in the puck and get it safely out of the defensive zone.

Well, Sloan flubbed on his clearing attempt and his pitiful excuse for a clearing pass was easily picked off by Minnesota forward Cal Clutterbuck. What did Sloan do next? Clearly flustered with just how poorly he handled the situation, he interfered with Clutterbuck and gave Minnesota a powerplay.

Just another day at the office for a team content to make a handful of mind-numbingly terrible decisions each and every game. I’m not saying that what’s going on is beyond the point of repair or anything overly dramatic like that, but I do feel that something needs to be done to get everyone’s attention.

But we’re getting to the point where it’s time to start holding player’s feet to the fire and everyone needs to be accountable for their actions. Sure, it’s a long season, but you’re already an eighth of the way through it and it only feels like the season began a week ago.

And although Ovechkin lit the lamp in the final two minutes of the game, it’s worth nothing that he also was a nonfactor for much of the night. Anyone watching for more than a few minutes had to pick up on Ovechkin’s complete disinterest against the Wild.

When Comcast showed a pre-packaged video of Ovechkin and Clutterbuck delivering bone-crunching hits, it was clear that any shots of Ovi in the highlight package were from previous games because he didn’t have anything near that level of intensity last night.

So maybe it’s time for Boudreau to pull one of his vaunted “Call out Ovechkin because he’s my best player and it’ll surely get the attention of the rest of the locker room as well” routine. Like I said, something needs to be done here.

I like this team and I really like Boudreau, but if you continue to underachieve, there’s going to be a point where people begin to get cranky. And let’s be real – the expectations heaped on this team are only going to make matters worse, because, at this point, it’s Stanley Cup or bust for some.

There’s no need to go down that road yet, but the longer this continues, the more vocal that slice of the fanbase and the hockey media in general is going to become.