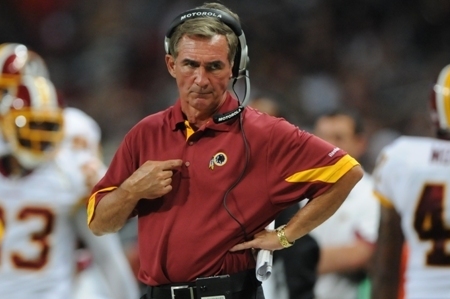 After outlasting the Chicago Bears 17-14 this past weekend, the Washington Redskins are now 4-3 and very much in the thick of things in the wide open NFC.

In fact, nine teams in the conference are currently 4-3 or better, but only the New York Giants have a better record within the NFC (the Giants are 4-0 against the conference, while the Redskins are 4-1). And if the playoffs started today, the Redskins would be a part of the postseason festivities, which is noteworthy itself after just how bad the team was one season ago.

But don’t think for a minute that all is well in our nation’s capital. Sure, the Redskins have won three out of their last four games and have now matched their win total from 2009 with nine games to go, but Washington could just as easily be a one- or two-win team at this point.

That’s because the Redskins offense – even with the additions of head coach Mike Shanahan, offensive coordinator Kyle Shanahan and quarterback Donovan McNabb – is still painfully inconsistent.

Look no further than the win in Chicago, where the Redskins had ideal field position throughout the entire first half and still failed to capitalize on it. Three of the team’s first six possessions actually started at midfield. Washington’s offense went three-and-out in two of those three instances, and they settled for a field goal the third time.

The Bears offense was equally inept, but Chicago led at the half 14-10 because of a McNabb interception returned for a touchdown. If not for the stellar play of cornerback DeAngelo Hall – who became just the 19th player in NFL history to intercept four passes in a single game – then the mood at Ashburn would be decidedly different this week.

[Seriously, let’s pause and think about this for a second: if the Redskins didn’t get called for a delay of game penalty, then McNabb throws his third interception of the day, with the Bears returning two of them for touchdowns. If that play stands, then the Redskins likely lose a game in which their defense created six turnovers. Has that ever happened in the history of football?]

But even as Chicago continually handed the ball back to Washington, the Redskins offense was unable to take advantage. McNabb threw two interceptions – with a third one called back only because of a delay of game penalty on the Redskins – and Washington, as a whole, fumbled the ball six times. Fortunately, the team only lost one of the six fumbles, but teams are rarely that lucky.

Had the Redskins offense been somewhat respectable against the Bears, the game would have been a blowout. With the picture-perfect field position and the six turnovers forced by Washington’s defense, this game should have been something along the lines of a 33-10 beatdown. But that’s something this offense simply isn’t able to make happen yet.

Case in point: in five of seven games this season, the Redskins have scored 17 points or less. Oddly enough, the two games in which Washington scored more than 17 points this year were both losses – a 30-27 in overtime to Houston and the 27-24 loss to Indianapolis.

If not for a fumble recovery returned for a touchdown by Hall in the season opener, the Redskins lose to Dallas. If not for his 92-yard interception return for a touchdown against Chicago, the Redskins lose to Chicago too. Seriously, even though Hall plays defense, he’s tied with receiver Santana Moss and tight end Chris Cooley for touchdowns on the season with two. And sadly, those two are the only legit receiving options McNabb has.

I’d compare Hall’s five interceptions (which he’s returned 92 yards with one touchdown) to receiver Joey Galloway’s eight catches for 139 yards in seven games, but that would only further embarrass a senior citizen who has no business on a football field. It’s not his fault the coaching staff continues to let him take the field though. Galloway is simply doing what is asked of him – which is apparently standing around and letting other people do all of the work.

With stiffs like Galloway and Roydell Williams taking up valuable space on the depth chart, it’s no wonder the offense is struggling. But things are actually worse than you might imagine.