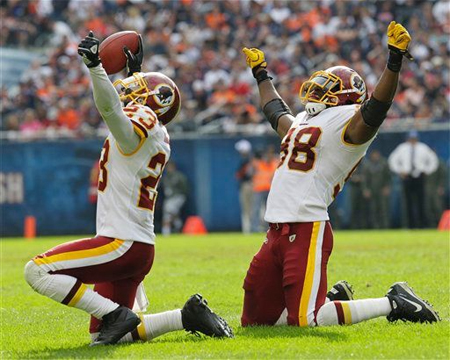 While the entire 53-man roster traveled to Chicago to take on the Bears at Soldier Field Sunday, it turns out all the Washington Redskins needed was cornerback DeAngelo Hall and defensive lineman Albert Haynesworth.

Those two did the heavy lifting and paved the way for a 17-14 victory that improved the Redskins’ record to 4-3 – matching their win total from a year ago with nine games remaining on the schedule.

Say what you will about the Redskins, who have yet to put together a full 60-minute effort this season, but they find a way to win, even on a day when not much is going their way. The games might not always be aesthetically pleasing, but head coach Mike Shanahan has this team believing they can win and, more times than not, they’re able to make that one key play when the game is on the line.

The Redskins offense “featured” one running back, one receiver and one tight end. I’d include the quarterback, but for the second consecutive outing, Donovan McNabb was off his game. And while Ryan Torain, Santana Moss and Chris Cooley all had respectable performances, the Redskins still fumbled the ball six times against Chicago.

They were fortunate in that only one of the six fumbles was lost, but that’s not a trend that Shanahan is going to be happy with. Taking better care of the football is absolutely necessary moving forward. Well, that and scoring more than one offensive touchdown a game. Oh, and improving the pass blocking. And finding a true second option at receiver. And … well, you get the point. There’s plenty of work to be done with the Redskins’ work-in-progress offense.

For as bad as the Redskins’ offense was, Hall was good enough to make up the difference. Seriously, he was so much better than anyone else on the field that Moss said it reminded him of a high school game. Cornerback Carlos Rogers, who said he’s never seen anything like Hall’s four-interception performance, compared it to a video game. Defensive lineman Adam Carriker joked that he felt like an offensive lineman, having to try and block downfield every time Hall got his hands on another ball.

Simply put – Hall played like the two-time Pro Bowler he is and single-handedly won the game for Washington. He became just the 19th player in NFL history to pick off four passes in a single game and tied the legendary Sammy Baugh atop Washington’s record book. It’s days like this that make ‘Skins fans forget about Hall being dragged by quarterbacks for a first down.

I am a big fan of Rogers, who is easily the best cover corner the Redskins have. But Hall is a game changer. He showed it against Dallas in the season opener, when he scored the team’s only touchdown on a 32-yard fumble recovery in a 13-7 win. But he elevated his game to a level we’ve never seen before as he picked off four second-half passes and took one of them 92 yards for his second touchdown of the season.

Even though Hall plays defense, his two touchdowns are good enough to tie him with Moss and Cooley for the team lead among pass catchers. In fact, the only player with more touchdowns than Hall this season is Torain, who has three rushing touchdowns on the year.

By the end of the game yesterday, I was openly lobbying for the Redskins to either keep their defense on the field to spare the offense from further embarrassment or to use Hall as a receiver, since he, unlike Joey Galloway or Roydell Williams, was actually capable of catching a football.

Neither happened, but it’s something to keep in mind moving forward – especially if the Redskins’ offense is going to continue to struggle.

While everyone will rush to praise Hall for his heroic efforts in Chicago, it’s equally as important to pause and recognize Bears quarterback Jay Cutler. If not for him and his stubborn insistence on throwing in the general direction of number 23, then none of this would have been possible.

Sure, other teams have found success throwing at safety Reed Doughty and/or cornerback Phillip Buchanon, but Cutler was convinced one of his passes would eventually beat Hall and make it to its intended target. That, of course, never happened, but it was great of him to keep trying.

“I’ve played against [Hall] before,”’ Cutler said. “There’s no reason to shy away from him. That’s hard for me to say throwing four picks to the guy but I still think if we had to play him tomorrow I’d go after him every time.’”

Thank you, Jay Cutler. In fact, your poor-decision skills were so decisive on Sunday that defensive end Phillip Daniels suggested the Redskins’ locker room should pass around a collection plate to purchase you a ‘thank-you gift.’

And let’s not forget that Cutler very well could have been a member of the Redskins, had owner Daniel Snyder and sidekick Vinnie Cerrato actually got their wish and traded for him when Denver was done with Cutler.

Of course, the two first-round draft picks that would have been lost in the trade netted Washington linebacker Brian Orakpo and tackle Trent Williams, so ‘Skins fans are perfectly happy settling for Cutler helping the Redskins win this way instead.

Say what you will about Haynesworth’s mood swings, but the temperamental defensive tackle played his best game in the burgundy and gold against Chicago. Playing for the first time in two weeks, after the death of his brother, Haynesworth was a force all game long.

The stat sheet credits Haynesworth with three tackles (two for a loss), two quarterback hits and a sack, but even that doesn’t do Fat Albert justice. He basically used a Bears offensive lineman like a ragdoll – driving him into Cutler for the sack – and made the play of the day with his goal-line stand against Cutler in the second half.

None of us knew Haynesworth had “ups” but the big man went airborne to step Cutler’s progress on a quarterback keeper, which slowed him up long enough for linebacker London Fletcher to force a fumble. Had Haynesworth not made that play, then we’d likely be sitting here trying to figure out how the Redskins wasted Hall’s four interception effort in the loss.

It’s foolish to try and forecast anything involving Haynesworth, who is always one selfish comment or action away from returning to the doghouse, but this outing should serve as a reminder to Shanahan and friends just how dominant Fat Albert can be when he’s motivated. Finding ways to keep him hungry and focused should be a top priority moving forward.

I asked some folks in the press box Sunday just how long the honeymoon should last for McNabb and reactions were mixed. He is, after all, the best quarterback the Redskins have had in 20 or so years. But after a second-straight subpar effort, I’m beginning to worry.

Either McNabb isn’t healthy or he’s forcing bad passes because of a lack of faith in the Redskins’ offensive line. Whatever the case, it’s time for offensive coordinator Kyle Shanahan to start earning his keep around here.

The last time we saw him, he was the man behind the top passing attack in football (the 2009 Houston Texans). Unfortunately, these days the Redskins need the defense to put points on the board just to give them a shot at victory.

As crazy as it sounds, I actually said to myself during the second quarter that I wished the Redskins would try to put the ball in Torain’s hands more than McNabb. The youngster was running with purpose against the NFL’s third-ranked rushing defense while McNabb was missing close-range targets in the passing game.

Of course, both McNabb and Torain struggled with turnovers – with each player fumbling twice and McNabb adding two interceptions for good measure. If that’s how it’s going to be moving forward than the Redskins really might want to consider keeping their defense on the field all game long.

A lot of what transpired in Chicago will be swept under the rug because the Redskins won, but there’s still plenty of work to be done if Washington plans on being anything more than a middle-of-the-pack team this season.