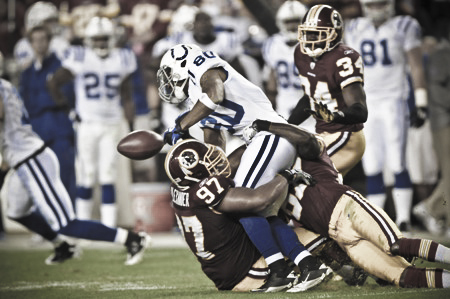 Even though the Washington Redskins are coming off of a 27-24 loss to the Indianapolis Colts on primetime television, the mood around the team these days is generally positive.

Of course, after a disastrous 4-12 season in which all hope was lost, Redskins fans are just happy to have their favorite team be relevant once again. Bringing in Mike Shanahan as the new head coach and Donovan McNabb as the new quarterback instantly brought a certain level of credibility that appears to have the rest of Redskins Park (minus one disgruntled defensive lineman) completely buying in to the new regime.

The Redskins currently stand 3-3, with wins over Dallas, Philadelphia and Green Bay. All three of those teams were in the playoffs last year. Washington also remained respectable in close losses to Houston and Indianapolis, which only proves this team is going to be competitive week in and week out.

Here’s the kicker: the Redskins haven’t played a full 60 minutes of football yet in 2010. The offense has yet to truly fire on all cylinders yet this season, and the defense still suffers lapses in decision making and tackling abilities too often.

Taking a closer look at the Washington offense, I think it’s safe to suggest that the Redskins should feel fortunate to be in their current position. The offensive line appears to be a revolving door – with new players shuffled in and out of the rotation on a weekly basis. As a result, the ground game has struggled mightily this season.

Running back Clinton Portis hardly looked the part before a groin injury sidelined him for the foreseeable future, and while Ryan Torain has set his career-high for rushing yards in a game twice this season (with 70 yards against Philly and 100 yards against Indy), he’s got a little while to go before we should “crown his ass.”

I’d mention the passing game, but it’s nowhere to be found. McNabb has done well throwing early and often at wide out Santana Moss and tight end Chris Cooley, but they’ve been the only two reliable options on a weekly basis. And, oh by the way, Cooley is now dealing with a concussion.

I like what receiver Anthony Armstrong and tight end Fred Davis bring to the table, but, statistically speaking, they’re both only good for one or two catches a game on average. And then there’s the Joey Galloway-Roydell Williams combo. Let’s just say I wasn’t stunned when a Colts defender intercepted McNabb’s final pass attempt of the evening Sunday night, because I didn’t think for a minute Galloway would end up with the ball. He hauled in one 62-yard pass while Houston was asleep at the wheel, and since then has five total catches for 51 yards over the last four weeks. But he keeps finding his way onto the field.

On the other side of the ball, it’s safe to say the switch to a 3-4 defense is still very much a work in progress. Players like linebacker Brian Orakpo and safety LaRon Landry have excelled in their new roles, but others are still struggling to find their groove in Jim Haslett’s defense.

And honestly, at times it still seems like Haslett is learning on the fly too. The first quarter of the Green Bay and Indianapolis games featured way too much read and react for my taste. It pained me to relive the Greg Blache era, as Aaron Rodgers and Peyton Manning systematically picked apart Washington’s passive defense with ease.

Luckily, just when all hope appeared to be lost, Haslett remembered he’s allowed to pressure the opposition. While they did a better job of getting to Rodgers than Manning, the defense at least began to once again resemble an NFL-caliber unit. Sure, running backs still gash this defense with 40- and 50-yard runs far too frequently, but in the instances when a Redskins defender actually stops the opposition, they’re bringing the pain. Bodies are dropping like a Carlos Rogers interception, as Andre Johnson, Steven Jackson, Michael Vick and half of the Packers roster can all tell you.

You’ve got to figure that if the first guy on the scene does a better job of making the play and limiting these backbreaking runs, then the defense will be in pretty solid shape. The Redskins will undoubtedly spend this offseason bringing in players they feel better fit this 3-4 scheme, but there’s enough in place now to keep the burgundy and gold in games.