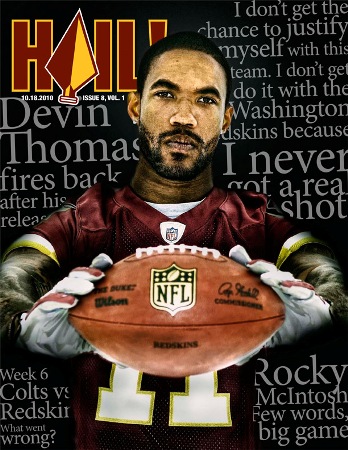 [As you can see, the eighth issue of Hail! magazine, our free digital publication dedicated to the burgundy and gold is now out. Here is a sneak peak of the main feature in this week’s issue — my interview with former Redskins receiver Devin Thomas, with his most revealing comments since his release.]

Devin Thomas has heard the rumors. He’s not smart enough. He’s not dedicated enough. He runs poor routes. He has no clue what it takes to be successful in the National Football League.

The third-year receiver has heard all of the whispers that began shortly after Mike Shanahan became the 28th head coach in Washington Redskins’ history, and he refuses to let that noise get to him.

As far as he’s concerned, critics can say whatever they want about the Michigan State product. Why try to argue with unnamed sources when the best solution is to simply let his play silence any doubters?

Just one problem – since he injured his hamstring during minicamp, he’s been unable to get onto the playing field. Shanahan opted to drop Thomas to the bottom of the depth chart after the injury, and he never recovered.

Through the first four games of the 2010 season, Thomas — the 34th overall pick in the 2008 NFL Draft — was on the field for just one offensive snap.

“Someone got tired,” he said of the lone play against the St. Louis Rams.

It was a startling fall from grace for Thomas, who was one of the few bright spots last season when he caught 25 passes for 325 yards and three touchdowns in 10 starts last season for head coach Jim Zorn.

Finally, after months of residing in Shanahan’s doghouse, the 23-year-old was release the day before the Redskins hosted the Green Bay Packers.

Before officially closing the book on Thomas, Shanahan had one more thing to say.

“In this profession we’re in, it’s not based on talent, it’s based on people working extremely hard,” Shanahan said. “Everybody has a different mindset of what work means, what dedication means, what commitment means.”

Thomas believes that he did display the dedication and commitment needed to excel. But the receiver, in his most revealing comments since his release, says that he was in a no-win situation.

“For me, ever since I tore up my hamstring in minicamp, I feel like I’ve been climbing an uphill battle in mud,” Thomas said. “It didn’t matter what I did, I wasn’t ever going to gain any ground. They weren’t going to give me a shot to win my position back.

“We had talks in the preseason as far as what I needed to do,” Thomas said. “Keep working hard in practice and on running my routes. Make sure I explode out of my breaks and that I’m not dropping balls. I took it all to heart. I tried to step up my professionalism, made sure I stayed after practice and yet, I don’t know. My situation never changed.”

Like any good soldier, once Thomas had a problem, he took it up the chain of command in hopes of figuring out what was going on.

“I started with [Redskins receivers coach] Keenan [McCardell],” Thomas said. “Keenan’s always been my right-hand man as far as keeping me motivated and telling me things are going to be alright. We talked daily and he always told me to keep pushing. After a couple weeks went by, I’m frustrated because I’m basically stuck on the sidelines.

“So I went to [Redskins offensive coordinator] Kyle [Shanahan] and asked ‘What do I have to do?’” he continued. “‘How can I get back on the field?’ He told me the same thing. He told me when you come off the line as a receiver, you need to explode off the line like you do on kick returns. He also told me to work on coming in and out of my breaks. Other than that, he said I was a beast. They all told me this stuff and I took it to heart. I worked on it, but nothing ever changed with my situation.”

That’s when Thomas finally sought out his head coach and requested a meeting, Oct. 7.