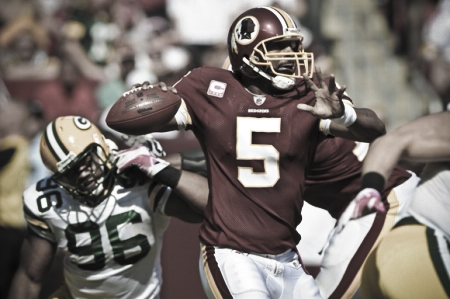 Say what you will about the Washington Redskins in 2010, but you’ve got to give them this – they find a way to win.

While last year’s Redskins were 4-12 and rarely gave fans cause for celebration, the story this season has been completely different.

Four of the five games Washington has played this season have been decided on the final play of the game. Three of those four instances ended with the Redskins emerging victorious, and those three wins came against Dallas, Philadelphia and Green Bay – all playoff teams a season ago.

The Redskins now sit 3-2. Even more impressive is their 2-0 record in the NFC East, the same division they went winless against in ’09.

Perhaps the most noteworthy aspect of their early-season success is the fact that, statistically speaking, this shouldn’t be happening.

Now, if you’re someone who only cares about wins and losses, then this post probably isn’t for you. But if you’re a stats nerd like me, then this will probably be right up your alley.

The old-school mentality when it came to success in the NFL was you needed to be able to do two things – run the ball and stop the opposition from running the ball.

Well, the Redskins aren’t particularly good at either at the moment, which is downright stunning considering head coach Mike Shanahan made a name for himself out in Denver by turning nobodies into 1,000-yard rushers seemingly overnight.

Sure, Clinton Portis and Terrell Davis were legit. But guys like Olandis Gary, Mike Anderson, Reuben Droughns and Tatum Bell are only relevant because of Shanahan’s potent ground game. And none of these guys were ever the featured back for an extended period of time. Shanahan happily used one until injuries and/or ineffectiveness took over and then, as Jay-Z would say, “It’s on to the next one.”

Portis currently has 49 carries for 195 yards and two touchdowns. Well, that and a torn groin muscle. That averages out to less than 50 yards per game, which we all can agree isn’t very good.

His backup, Ryan Torain, has 41 carries for 156 yards and one touchdown for the year, which breaks down to 52 yards per game. Again, not overly impressive.

If you combined Portis’ and Torain’s stats for the year, you’d have 350 yards and three touchdowns – which equals the production of Cleveland running back Peyton Hillis (although he’s done it in less carries and has one more touchdown). The ironic part of it all is Hillis was a seventh-round draft pick by Shanahan in 2008.

With the running game stalling, the entire weight of the offense has been thrust upon the shoulders of quarterback Donovan McNabb. Fortunately for everyone involved, he’s fairly versed on working with the benefit of a dependable rushing attack.

McNabb has racked up more than 1,300 yards in passing through five games, which is fairly impressive considering he’s got two dependable targets – receiver Santana Moss and tight end Chris Cooley. And look folks, I like Anthony Armstrong as much as the next guy, but can we let him string together another solid outing or two before we “crown his ass?”

So really, if you think about it, the Redskins aren’t even one dimensional on offense. They’re half dimensional, if there is such a thing. They have no real running game and they only have half of a passing game because McNabb only has two legitimate options to choose from because Shanahan insists on pretending Joey Galloway and Roydell Williams are capable of being productive.

The Redskins defense is even more maddening. The unit, as a whole, ranks dead last in the NFL in total defense, which is based on yards against. That’s what happens when you allow an average of more than 410 yards of offense a week.

But if you factor in points per game, the Redskins are actually in ninth place – allowing 18.4 points. That illustrates that the Redskins defense, now more than ever, has completely embraced a “bend-but-don’t-break” mindset.

The Redskins allowed Aaron Rodgers and friends to rack up more than 200 yards in the first quarter against Green Bay last week, and yet, they were only down 7-0. The only reason the Redskins were still in the game was because Packers players were dropping like flies due to an onslaught to injuries and the Packers couldn’t close.

They failed to convert on a 4th-and-goal situation. They missed a pair of field goal attempts. They did everything imaginable except put points on the board. And because the Packers screwed around and let the Redskins eventually wake up and get back into the game, the home team eventually found a way to win ugly.

Thankfully, after getting worked in the first quarter while keeping his defense in read-and-react mode, defensive coordinator Jim Haslett finally remembered that it’s still legal to blitz your opponent. Suddenly linebacker Brian Orakpo was making life miserable for Rodgers, who up until that point had all the time in the world to find an open receiver.

And if Rodgers did get a pass off, that receiver was immediately met by safety LaRon Landry, who continues to crush anything and everything in his path now that he’s no longer being asked to portray a free safety in a passive defense.

It’s fitting that the deciding moment in the Dallas game involved Orakpo and the deciding play against Green Bay was all about Landry because those two, more than anyone else, have been the most consistent players on the Redskins roster this season.

The offense has been up-and-down and the defense continues to play with fire on a weekly basis, but Orakpo and Landry have been lights out all season long. If you’re looking for a reason why the Redskins are currently in first place in the NFC East even though they’ve given up more points than they’ve scored, look no further.

What happens next is clearly up for debate. If the defense continues to allow opponents to pile up yards with ease and the offense continues to sputter, then it’s only a matter of time before the team’s good fortune runs out.

But one could also argue that the Redskins, for the first time in recent history, are finding ways to win on days when little is going their way. A team that used to have little chance at victory on days when adversity struck is now winning on pure guts and determination.

Sure, they’ll always play up or down to the level of their opponent – whether it be a Super Bowl bound team or high schoolers – but at least they’re playing competitive football once again. Lord knows that hasn’t always been the case around here.