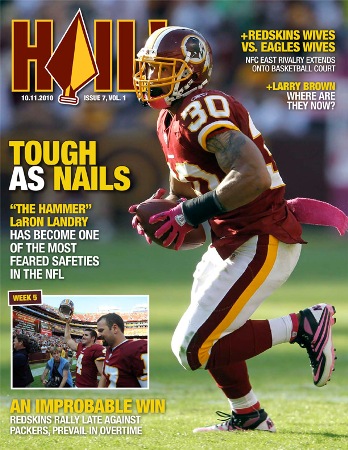 [As you can see, the seventh issue of Hail! magazine, our free digital publication dedicated to the burgundy and gold is now out. Here is a sneak peak of the main feature, written by Micah Fitzhugh, in this week’s issue — an in-depth look at Redskins strong safety LaRon Landry.]

He played Pop Warner football illegally at the age of five, and despite going against kids as old as eight, he earned the nickname, “Hammer.”

Frank Landry was the coach, and so his second-born son could play on the squad, which also included his seven-year-old son, Dawan, he made up a fake identification card, displaying little LaRon’s age as six.

“I remember it all,” LaRon Landry said. “I was No. 2. I had all those white arm pad/gloves and everything. I’d just run around hitting people. People used to look at me and say, ‘You’re mean! You’re like Ronnie Lott out there!’”

It was all over after that. Landry kept playing, switched from linebacker to quarterback a few years later, but never stopped hitting. In high school, he’d run the option and instead of pitching the ball to the running back as a defensive end converged on him, “Hammer” would lower the boom and run his man right over.

“No shaking, no juking. Just hits. Downhill running and hits,” Landry said. “I played quarterback like I played linebacker. I loved the hits.”

It’s clear all these years later, nothing has changed. Flash forward to a hot day in early August at Redskins Park, only a week into training camp.

Landry didn’t give a crap where he was, or who he was going against. He read the play, locked in on his target and launched himself full-speed into the unsuspecting pass-catcher, sent him flying and left him in a heap on the sideline.

The victim this time was Chris Cooley, the Washington Redskins’ Pro Bowl tight end, and it was only a week into training camp, during a series of partial contact 11-on-11 drills. All of the other plays had ended with defenders making contact at slightly less than full-speed, and giving them a bear hug. A coach’s satisfactory whistle would send both teams to their respective huddles.

Landry was in mid-season form, however, and Cooley hadn’t gotten the memo. A little salty, Cooley rose to his feet, met Landry facemask to facemask and let it be known that he didn’t appreciate the overzealous lick. The fourth-year strong safety laughed and bounded off back to the defensive huddle.

“LaRon goes full-speed all the time, that’s just how he practices,” Cooley later said, downplaying the confrontation. “He makes us all better.”

See, Landry just can’t help himself. An intense love for football pulses through his veins, and the chance to deliver bone-rattling hits fuels him.

Landry is always looking for the next opportunity, but he was champing at the bit extra hard during training camp because camp signaled the end of a long offseason that for Landry featured recovery from toe surgery, and that was preceded by a dismal 4-12 season.

Last year Landry made a career-high 90 tackles, and also recorded an interception. Little satisfaction could be taken from the 2009 campaign, however. Not only did the Redskins take a step backward from the 8-8 mark they posted in ‘08, but Landry struggled personally.

Sure, 90 tackles is nothing to sneeze at. But Landry had his fair share of unnecessary roughness and personal fouls to his name as a result of late hits after a play had ended on the field, or even serious blows out of bounds.

Making matters worse – and according to Landry, some of the reasons for the undisciplined play – was the fact that he was playing free safety (not his natural position of strong safety) and often had to play far downfield as a centerfielder rather than closer to all the action. Landry also often struggled in pass coverage and was susceptible to the double-move as opposing teams scored over the top after their receiver got Landry all twisted up.

“It was just frustrating all around,” Landry said. “The way I was preserved and limited of my ability, just to sit in the middle of the field, not to be close to the ball, not to make tackles. I really was not helping my team out because of my strength. I was just limited and frustrated all the way along. It wasn’t anything [personal] with [defensive coordinator] Greg Blache or anything. It was just his scheme, and I wasn’t right for his scheme.