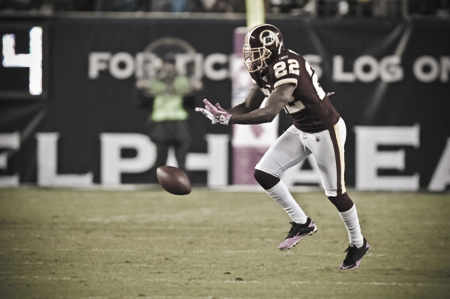 Before the season began, I, like many, thought the Green Bay Packers had as good of a chance as any team of making a Super Bowl run.

I looked at a dynamic offense, led by quarterback Aaron Rodgers (you know, the guy drafted one spot ahead of Jason Campbell in 2005), and an aggressive-minded defense and thought the Packers had a legitimate chance of being the last team standing in the NFC.

And yet, here we are just four games into the season, and not only am I unsure about Green Bay – but I think an inconsistent team like the Washington Redskins has a very real chance at victory this Sunday.

Green Bay’s offense has been completely one-dimensional, thanks to a season-ending injury to running back Ryan Grant. Brandon Jackson was supposed to step in and fill the void, but he’s rushed for just 137 yards on 45 carries (3.0 yards per carry).

A year ago Rodgers was sacked an astounding 50 times, most in the NFL. While he’s only been sacked five times through four games, injuries and inconsistency on the offensive line weigh heavily on his decision making during games.

Because the Packers have also been inconsistent in their pass protection this season, there are times when Rodgers is forced to get rid of the ball quicker than he’d like. That’s translated to five interceptions thrown by the 26-year-old this season.

So basically, because the Packers offense has no running game and their pass protection has been hit or miss this season, defenses obviously want to key in on Rodgers, make him uncomfortable and try to force him into making a few poor throws.

Now, on the other side of the ball, is the Redskins defense. At first glance, you see the 31st ranked defense going against a quarterback who has thrown for 8,472 yards and 58 touchdowns over the last two seasons and there’s little reason to believe this could have a happy ending for the burgundy and gold.

But I’m here to tell you that, in this case, the numbers are a bit misleading. If you’ve watched closely over the last three weeks, the Redskins defense has done something remarkable – they’ve basically forced opposing offenses to completely sacrifice any semblance of a deep passing attack.

Think about it. In the last three games, Houston’s Matt Schaub, St. Louis’ Sam Bradford and Philadelphia’s combo of Mike Vick and Kevin Kolb have all settled for short to intermediate passes. Last week alone, Eagles running back LeSean McCoy was targeted 15 times in the passing game, meaning Philadelphia was content to dink and dunk all day long.

It’s crazy to think that a defense – especially Washington’s, which let players like DeSean Jackson seemingly score at will last season – can somehow intimidate offenses into completely giving up on taking shots down field.

Other than a desperation throw on 4th-and-10 to Texans receiver Andre Johnson and a Hail Mary on the final play of the game in Philly last weekend, opposing offenses are content to take three step drops and get rid of the ball to someone underneath as quickly as possible.

Because I am by no means someone who makes a living breaking down film, I went to Redskins Park this week to chat with some defensive players in hopes of finding out if my eyes have been deceiving me or if the Redskins have, in fact, been able to shut down deep threats through the first month of the season.

First of all, you’re not blitzing all that often. And yet, you guys seem to be doing something to force the hand of opposing offenses. I simply cannot remember a time when I’ve seen a team completely take away the threat of the deep ball. So tell me – what the hell are you guys doing out there?

“You can definitely credit that to Coach [Jim] Haslett and his gameplan,” said cornerback Phillip Buchanon. “That’s definitely been a part of his plan. Now if you want to get into more detail, maybe he’ll do that with you. But they come up with the gameplan and then it’s on us to execute.”

Since Buchanon acted as if I was asking him to give away state secrets (or worse, a detailed breakdown of the gameplan), I figured I should ask someone else if this all is really going on or if I’m making stuff up.

“No, you’re right,” said cornerback Carlos Rogers. “Our thing is, if we can stop guys from getting those big chunks of yards, we can work with teams settling for checks downs and stuff like that. We’ll eventually get off the field. We can live with teams trying to dink and dunk the ball down the field, but when you give up 30 or 40 yards at a time in the passing game that can turn the game around quickly.”

A year ago, all DeSean Jackson had to do was make a double move and he was in the clear for a 60-yard touchdown catch. Last week, he’s a nonfactor. How does that even happen?

“Yeah, he did what he wanted at times last year,” Rogers admitted. “But this time around, we jammed him at the line all day long and they eventually got frustrated. Not being able to get the ball into his hands really affected everything else they were trying to do and our defense is doing a great job of creating pressure and getting sacks or those holding calls.”

That brings up a good point. While the Redskins defense only has eight sacks this season, they still seem to be doing a solid job of applying pressure. While I was pestering the players, I figured I should ask about that as well.

“The first couple of weeks we blitzed a lot,” safety Reed Doughty said. “These last couple of weeks we really haven’t. We’re doing a good job of jamming receivers to disrupt the timing of their offenses. I think we did a good job in zone last week and its forcing teams to throw those passes underneath because they felt that was what was open. Quarterbacks aren’t going to force it if it’s not there.”

This week’s matchup against the Packers should prove to be the defense’s biggest test this season. Rogers fully admits that Green Bay has no issue throwing 40 or 50 passes a game, and in situations like that “You’re going to give up some yards.”

The key, he says, is to once again limit those big plays and try to force Rodgers into making a few questionable passes. Now, when that happens, it’s up to the Redskins defenders to capitalize.

After dropping a “gimme” interception that would have sealed the Eagles game without all the added stress, Rogers knows he’s got to do a better job if the opportunity presents itself again.

“If you think about it, I dropped an easy interception against Dallas,” Rogers said. “The next week against the Texans, I came back and got a pick. Against the Eagles I should have had another one, so that means I’m going to get one this week against Green Bay. If the ball comes my way and I’ve got the chance, I’m getting a pick this week. I guarantee it.”

While I love Rogers’ enthusiasm and confidence and I’ve even predicted he’ll set a career high for interceptions this season, I cannot in good faith recommend anyone run to Las Vegas and bet it all on the hands of Carlos Rogers. I’m a big fan of the guy, but I don’t want you showing up at my doorstep when you need a place to crash because you lost it all betting on “Stone hands.”

Best-case scenario, the Redskins defense once again prevents the opposing offense from completing any game-changing plays with deep passes. Green Bay is forced to settle for dinking and dunking, which is ideal, especially when you think of the number of big-name players (Andre Johnson, Stephen Jackson, Mike Vick, LeSean McCoy) who have been injured by the hard-hitting Redskins defense over the last few weeks.

When offenses throw everything underneath, they’re completely playing into the strength of the aggressive Washington defense. Every play ends with a pile up of Redskins players sandwiching the ball carrier and it’s only a matter of time before damage is done. You never want to see anyone get hurt, but at the same time, it’s tough to carry an entire offense on your back with cracked ribs or a groin injury.

The longer the defense can continue to dictate how opposing offenses play, the better the chances of a Redskins victory. And honestly, if the Redskins can do it again this weekend against a pass-happy Packers offense, then this defense is a whole lot better than that 31st ranking suggests.