ryan torain is the man … for now 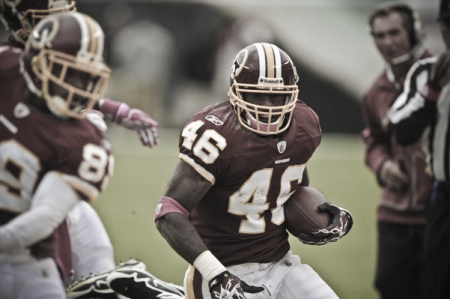 Anyone who has been a fan of the Washington Redskins for more than a day or two should know by now that there’s no such thing as a quiet week out at Redskins Park.

Sure, the Redskins pulled it together last weekend to earn a much-needed victory against the Philadelphia Eagles after back-to-back disappointments against Houston and St. Louis, but much has changed in the few days since the win.

Rookie tackle Trent Williams sounds cautiously optimistic that he’ll be able to play against Green Bay this weekend, which is fantastic because it means Stephon Heyer will hopefully no longer be prominently involved. And Hunter “the punter” Smith is expected to re-sign with the Redskins because Josh Bidwell is old/ineffective/injury-prone.

But not all is sunshine and lollipops at Redskins Park. Not after it was announced that running back Clinton Portis will be out at least four to six weeks with a third-degree separation of his groin.

You’re not going to believe this, but a running back needs his legs and groin to be relatively healthy in order to be effective. Unfortunately for Portis, this injury was apparently severe enough that the groin separated from the bone. [Editor’s note: Ouch.]

That leaves the recently reacquired Ryan Torain as the primary ball carrier and Chad Simpson as his backup, even though neither was on the 53-man roster when the season started. Remember when the Redskins boasted a ridiculously deep backfield of Portis, Larry Johnson and Willie Parker? Yeah, well that didn’t exactly work out for them, did it?

The only other running backs in the building are Keiland Williams and Javarris James, both of whom currently reside on the practice squad.

Folks who pay way more attention to these types of injuries than I do point out that former Jacksonville running back Fred Taylor suffered a similar groin injury in the second week of the 2001 season and didn’t play again the rest of the year. So the four-to-six week time frame might be a bit optimistic.

The smartest thing Portis and the Redskins can do is to have patience with the situation. No sense rushing the 29-year-old back into the lineup – especially when the chances of re-aggravating an injury like that can be high.

Which leaves Washington with Torain. Now, before you get overly excited after the 24-year-old’s solid outing against the Eagles (18 carries for 70 yards and a touchdown), please remember that Torain has had health concerns of his own since he came into the NFL.

In 2008, Torain broke his left elbow during training camp and was inactive for the first seven weeks of the season. Once he finally recovered from that, a torn ACL ended his rookie campaign after he saw action in just two games.

The following season Torain was sidelined once again by a knee injury and the Denver Broncos finally cut the cord on the oft-injured youngster. The Arizona State product wasn’t heard from again until he arrived in Ashburn as an invitee during minicamp and training camp.

The best way I can describe Torain during that time frame would be solid, but not spectacular. While competing with Portis, Johnson and Parker in an overly crowded backfield he didn’t do anything to really hurt or help his chances of making the 53-man roster.

Surprisingly, Torain, who Mike Shanahan once compared to Terrell Davis in Denver, lost out to Williams when the final cuts were made heading into the season. But Torain quickly ascended from the practice squad, back to the active roster and now, with Portis out of action for the foreseeable future, it’s his job to lose.

And with Torain stepping up and playing so well against the Eagles last weekend I can understand why ‘Skins fans are excited about the prospects of some youth actually earning some playing time on this roster. But let me go ahead and slow the momentum on that front now.

Torain’s 40 carries for 185 yards and two touchdowns are fantastic numbers – for a single game. They’re a lot less impressive once you realize that’s everything he’s done since 2008.

Here’s my concern: Torain’s track record would seem to indicate that it’s only a matter of time before he joins Portis on the injury report. At 6-foot-1 and 218 lbs., Torain is a bigger back, but he’s not a bruiser in the mold of someone like Brandon Jacobs – a guy who would much rather go through a defender than over or around him (Quick tangent: Can someone get the memo to Redskins fullback Mike Sellers that 280 lb. backs don’t jump over anyone. They lower their shoulder and go through them. I’m convinced he’s slowly killing Shanahan every time he thinks he can hurdle a defender.).

Well, if you pay attention to Torain’s running style, he runs very upright. He’s got some foot speed, but he’s not the fastest guy in the NFL, so he’s basically leaving himself vulnerable every time he carries the ball.

Maybe if he made himself more compact and less susceptible to punishing blows from tacklers, I’d have more faith that he could be a long-term answer, but I see how quickly a much bigger back like Jacobs has burnt out and I worry that it’s only a matter of time before Torain faces a similar fate.

Best-case scenario is Torain coming in and breathing new life into the Redskins inconsistent running game and these issues aren’t a concern until a few years down the road, but I see an injury-prone running back whose erect running style essentially puts a huge target on his back and it scares the hell out of me.

It scares me because the Redskins are basically forced to put all of their eggs in one fragile basket. If Torain does go down, then what? Keiland Williams? Chad Simpson? Larry Johnson? Willie Parker? Mike Sellers? Which of those names inspires any confidence in you?

And while quarterback Donovan McNabb is used to running an offense without the benefit of a ground game, it’s never ideal to head into the bulk of a season with a one-dimensional offense that only has two reliable targets.

So yeah, please forgive this post for being a bit of a downer, but looking ahead I can’t help but worry about the Redskins offense. History says Portis likely won’t be able to contribute again this season and that Torain struggles to stay healthy for more than a week or two at a time.

I really hope I’m off on this one, but if I’m not, things are going to get pretty ugly on offense in the not-too-distant future.

One final note, because I hate ending this thing on such a down note. I talked about Torain’s track record earlier, but I’d be foolish not to mention Mike Shanahan’s track record as well. If ever there was a head coach capable of taking a bunch of spare parts and turning them into a productive backfield, it’s Shanahan. So we’ve got that going for us, which is nice.

[Update: It appears Javarris James has been signed to the Indianapolis Colts’ active roster, so he’s gone before we even got to know him. He’s been replaced on the Redskins practice squad by someone named Quinn Porter, who spent some time in training camp with the Packers.]